What a Racquet: Prince is Bankrupt 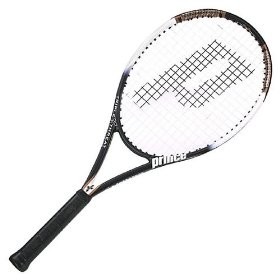 To anyone who plays racquet sports, the news that Prince is bankrupt is like hearing that Wilson failed at footballs or McDonald's flopped at making burgers.

Prince may not have invented the oversized racquet, but for my money — a few thousand dollars in various racquets and other equipment over four decades — nobody tried harder or did it better. As a player, I appreciated the quality and durability of their products. As a fan, I am grateful for their sponsorships. And as a wordsmith, I marvel at their ability to make racquets that are virtually identical to other Prince racquets and other manufacturers' racquets seem exciting, cutting edge, different, performance-enhancing and, of course, new. Entire issues of tennis magazines are devoted to racquet hype.

The real advances in racquets in tennis, racquetball, and squash came when small wooden or metal racquets were replaced by ever-larger and ever-lighter composite racquets. Within eras, the racquets were more alike than different. The unenviable job of the Prince marketing and sales departments was to make each innovation of a few grams of weight, change in balance, a few inches more or less in head size, and different shapes seem as exciting as a new Corvette or the latest offering from Apple.

“After considering several business options, the board of directors and the senior management team firmly believe that the Chapter 11 filing is not only a necessary step but also the right thing to do to ensure a secure future for Prince,” said Gordon Boggis, president and CEO of Prince Sports Inc. “We have a long history, and are planning for an exciting future, focused on game-changing, product innovation, engineered to take players’ games to the next level. Securing this protection will help us to continue to focus on that vision.”

Now, about that vision. Can better equipment change your game or take your game to the next level?

Tennis coach Vic Braden, who is one part teaching pro and three parts psychologist, wit, and salesman, once said at a clinic in Memphis that "it's not the racquet, it's the turkey on the end of the handle." A killer marketing phrase, or rather a killer-of-marketing phrase, if there ever was one.

In his book "Open," Andre Agassi said the biggest change in the game in his final years was not bigger racquets or bigger players but the new elastic polyester string that imparts more spin on the ball.

Sarah Hatgas, tennis coach at Rhodes College, says "New tech in racquets makes it easier on the elbow! The game has developed into a power game from the baseline and volleying is becoming a lost art."

Senior player Nancy Gates says "I would in no way consider myself a racquet sports expert, but at my age my primary concern is about how badly my body gets destroyed by the sport, and how equipment may or may not exacerbate the pain. There are some racquets that are stiff and cause my elbow to hurt, so I stay away from those. Other than that, any racquet, once I get used to it, probably has no effect one way or the other on my game. I have one bad foot, so shoes are key for me. If I don't have the right shoes, I cannot play. In fact, I have given away two different pair of brand new shoes after only one wearing, because they weren't quite right - hundreds of dollars wasted."

Randy Stafford, a former racquetball pro, said that rule changes adopted by the sport in 1997 increased racquet size about 25 percent which resulted in 50 percent more hitting area for more power. "This change was made in racquetball due to the manufacturers' demands to increase sales and royalties. No question, the changes to the racquet size changed the game from a control and manageable power game, to one of excess speed that not only changed the original design and intent of the game, but increased the speed of the ball to a level that is quite unmanageable for the everyday player."

Ted Gross, former squash pro and editor of the Daily Squash Report, says, "Nothing to back this up but my opinion is racquets (assuming we are comparing only top-of-the-line models) make a difference in tennis but not in squash. Hitting a tennis ball well is substantially more complicated than hitting a squash ball well, and differences in frame stiffness and head balance and even grip shapes are therefore quite apparent. The grip over-wrap is the most important piece of equipment in squash, because before the invention of the Tournagrip you couldn't hold onto the racquet no matter what you tried."

I'm with Gross and Gates. The most underrated piece of equipment is a $2 roll of grip tape. I don't see how players did without it, especially tennis players in the hot and humid South back in the days of wooden racquets with slippery leather grips or gauzy overwraps. Second place is shoes with gum soles that are much lighter than those Goodyear-rubber soled clodhoppers you see on the tennis court. Gum-soled shoes are designed for indoor court sports but once you get used to them anything else is like putting on ankle weights.

To the extent that overgrips extend the life of racquets by making players less likely to discard them, Prince was doomed not by faulty marketing or Internet sales or all those fancy $200 racquets produced by its competitors but by a $2 piece of tape.