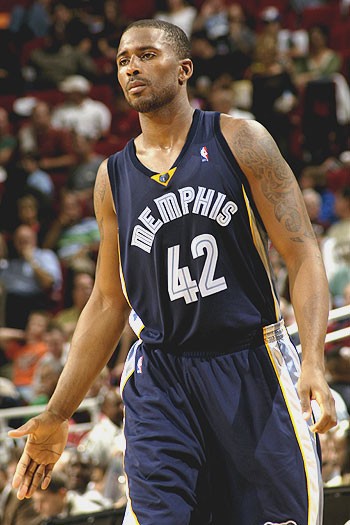 When I think of Lorenzen Wright, among the first things that come to mind:

His status as the centerpiece of a great University of Memphis team alongside fellow local products such as Cedric Henderson and Chris Garner; reading the Sports Illustrated story on that team — with its dynamic photo of the starting five — while I was away at college.

His startling 33-26 explosion against the Dallas Mavericks, three games into the Memphis Grizzlies inaugural season.

Seeing him in the locker room after Grizzlies games, both knees packed in ice, willing to talk and candid with a gesture or glance even when he couldn't be with words.

The craftiness that allowed him to survive in the NBA as an undersized post player, and the palpable, smirking pleasure he took in his collection of vet's tricks.

His central role in helping a skinny, soft seven-footer from Spain develop into an NBA star: Getting in Pau Gasol's face when needed, but also watching his back.

His warm, winning personality in those great early television ads for the team, like the one where he was trying to instruct rookie Drew Gooden on the way around town or, even better, this team-up with Mike Miller at Midtown's Barksdale Restaurant:

But the very first thing that came to mind this afternoon, when I was driving home and I heard the news that Wright had been found dead in southeast Memphis, was what former coach Hubie Brown said when introducing Wright at Brown's first Grizzlies public practice. Microphone in hand, addressing fans, Brown introduced all the players, but Wright was the only one about whom he said this: "This guy," I remember Brown telling everyone in the arena, "is living the dream."

What Brown meant was that Wright had been a high school and college star in Memphis, his hometown, and was now suiting up as starting center for an NBA team at home. Something he did for three Memphis playoff teams. How many athletes in any sport have had the experience of being a hometown star at all three levels of competition? Certainly many fewer than have found themselves in all-star games or halls of fame.

Wright's life was charmed: Unprecedented hometown athletic success. Immense respect and affection garnered on and off the court. Seven children. But it was also plagued with troubles: One child tragically lost, as an infant, during his tenure with the Grizzlies. Recently, a divorce and home foreclosures that may or may not be relevant to his death. (As my colleague Frank Murtaugh points out in his remembrance of Wright, there's been a pattern of troubles that has touched too many Memphis basketball greats.)

Answers to that will hopefully come in the days and weeks ahead, as the investigation into Wright's death — likely his murder — will be an enormous story in this city. But for now, let's remember Wright as not only a tragic Memphis story, but before that as a great Memphis story. And as a man who left a considerable mark on the city's cultural life over the past couple of decades.

Finally, to remember better times, Wright's draft night. Embracing his parents and embracing his future, with commentary from his future coach: