A "Lockout Summer" Look Back

I've taken most of this lockout summer off from hoops blogging, but with the season winding down and — hopefully — talks between the owners and players' association heating up, I'm going to (take a) leap (of faith) back into basketball again.

While we wait for the lockout to end and free agency to begin, I'm going to spend the next few weeks taking a position-by-position look at where the team's roster stands coming out of last season and what expectations and needs will be heading into what will hopefully be the 2011-2012 season.

But, first, let's cleanse the blog palate with a quick overview of the most notable and/or interesting pieces of Grizzlies news that have happened since the lockout began: 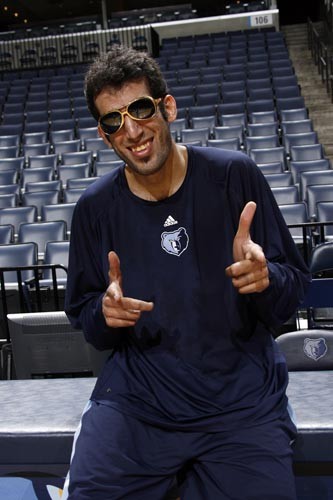 June 28: Grizzlies Extend Qualifying Offer to Hamed Haddadi: Unlike most qualifying offer extensions, this one was not a foregone conclusion. While he's been productive when given minutes, Haddadi has spent most of his Grizzlies tenure at the end of the bench and the smart money was probably on a return overseas for next season. But Haddadi told me late in the season that he hoped to stay in the NBA and, unless the Grizzlies were to pull back the offer before Haddadi were to sign it, the Iranian center is guaranteed a roster spot back in Memphis next season if he wants it. But Haddadi was also offered a chance to play in China.

July 7th: So Long, Dakota Wizards: The Grizzlies got a new D League affiliate — the Reno Bighorns — when the Golden State Warriors purchased the team's previous affiliate. No longer will Grizzlies prospects enjoy winters in Bismarck the way Haddadi and Hasheem Thabeet have in recent seasons.

July 19th: What Could Be - Regular Season Schedule Announced: The Grizzlies' prospective regular-season schedule is probably the most enticing ever: Five national television games on ESPN or TNT (including three at home), along with an additional eight NBATV games. And that early West Coast road trip that's gotten the team off to a slow start the past two seasons is absent. Instead, 11 of the first 17 games are at home. It's all set up for a good start and lots of exciting home games. If we have a season.

July 24th: Josh Selby Goes Large in Summer League: Griz draftee Josh Selby got over his disappointing season at the University of Kansas and reminded everyone of his potential by dropping 48 against the Milwaukee Bucks' Brandon Jennings in summer-league play at home in Baltimore: 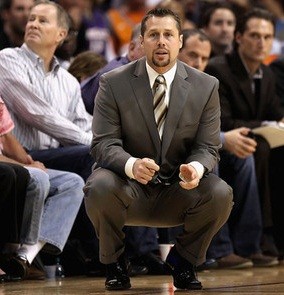 July 29th: Dave Joerger Re-Ups, Moves Up: After emerging as a candidate for Kevin McHale's new coaching staff in Houston, Grizzlies assistant Joerger stopped the trend of coaching-staff losses by signing a two-year contract extension that featured a bump in pay and a move up to lead assistant. Given this new status and the high regard he seems have around the league, you would imagine that when Joerger does leave the team, it will be for a head-coaching job.

August 4th: Marc Gasol Dismisses Playing in Spain: Lots of NBA players have been making overseas contingency plans should the lockout cut into the scheduled season. Marc Gasol, with no contract in place (he's a restricted free agent) and with experience playing professionally in Europe, would seem to be the perfect player for the Euro leagues to court. But Gasol dismissed the idea of signing a new pro deal back in his home country, saying to do so would be selfish — presumably because he'd be taking someone's roster spot — given that he would be returning to the NBA post-lockout.

August 11th: Rudy Gay Cleared to Play: Right on schedule from April's shoulder surgery — after which Gay was given a 4-6 month recovery timetable — the star forward announced he was shooting a basketball again. A few days later he posted video of one of his first workouts.

August 14th: Hamed Haddadi Dominates Jones Cup, Rolls a Strike: Haddadi may be a marginal NBA baller, but he's like the Shaq of Mid-East and Asian international tournaments, as he lead his Iranian national team to its third straight "William Jones Cup" tournament title, notching a dominating 35 points, 18 rebounds, and 7 blocks in the tourney final against South Korea. Haddadi celebrated with a perfect 10:

August 18th: Game Broadcasts Move on Down the Dial: After several years on Soul Classics 103.5, the team announced that radio game broadcasts are moving to ESPN Radio affiliate WMFS, which simulcasts on 680 AM and 92.9 FM. I'd say this is a more coherent programming match.

August 18th: NBA Plays Cruel Joke, Releases Preseason Schedule: The Grizzlies' four home preseason games are packed within a week-and-a-half: Oct. 11 against Charlotte, Oct. 13 against Milwaukee, Oct. 15 against Golden State, and finally, Oct. 20 — on TNT! — against the Miami Heat. That is, in the unlikely event that these games actually happen. Sigh.

August 21st: 50 the Number, Another Summer: The annual summer ritual of Zach Randolph popping up in a police report happened in Portland this year. (Last summer: Los Angeles and Indianapolis.) This time, according to the Portland PD, a weed dealer was beaten up at Randolph's suburban home in the wee wee hours. Randolph was in the home but apparently did not participate in the alleged assault and thus was not considered a suspect by the police. From a legal perspective, this summer's Randolph's buddies/drug story seems even less likely to directly impact Randolph than last summer's. But that doesn't mean it should be dismissed or rationalized away — especially since further testimony from the dealer/accuser implies Randolph witnessed and condoned the assault.

A lot of the reaction this incident should inspire is pretty obvious. Geoff Calkins already summed up the exasperation many of us felt, though I might demur somewhat from Geoff's' dismissal of the "socioeconomic" aspect of Randolph's problems. In the world in which Randolph grew up, the line between "good" and "bad" people and "criminals" or non-criminals probably seems little more fluid and complex than in Geoff's or mine.

If Randolph has been a different man on the court and in the locker room for the Grizzlies and a different man in the community in Memphis, these cases make it clear that his old problems still linger, perhaps compartmentalized away from his new home and his family. Fans may have hoped that Randolph had divorced himself from his old problems and associations, but that clearly isn't the case. But keeping it out of Memphis isn't enough. At a minimum, can't we hope that he can at least be smarter about these things? Why maintain a residence in Portland given the bad history there and the likelihood that the local media could be particularly sensitive to any problems? When you've just signed a $66 million extension, can't you conduct a better cost-benefit analysis about letting a dealer get harassed over the price of his weed versus the cost of having said harassment show up in police reports and newspaper headlines?

If Memphis is a safe (from himself) zone for Randolph right now, few players need the lockout to end sooner or the season to start quicker.