Griz-Wolves Game Preview: Where the Home Team is Teetering and RUBIO! Comes to Town

With my typical Tuesday morning print deadlines, I wasn't able to do a postgame notebook for Monday night's 89-84 loss to the San Antonio Spurs. So I'm pulling together a gaggle of quickish thoughts today looking back at that game, ahead to tonight's game with the Minnesota Timberwolves, at some more general issues with the team. 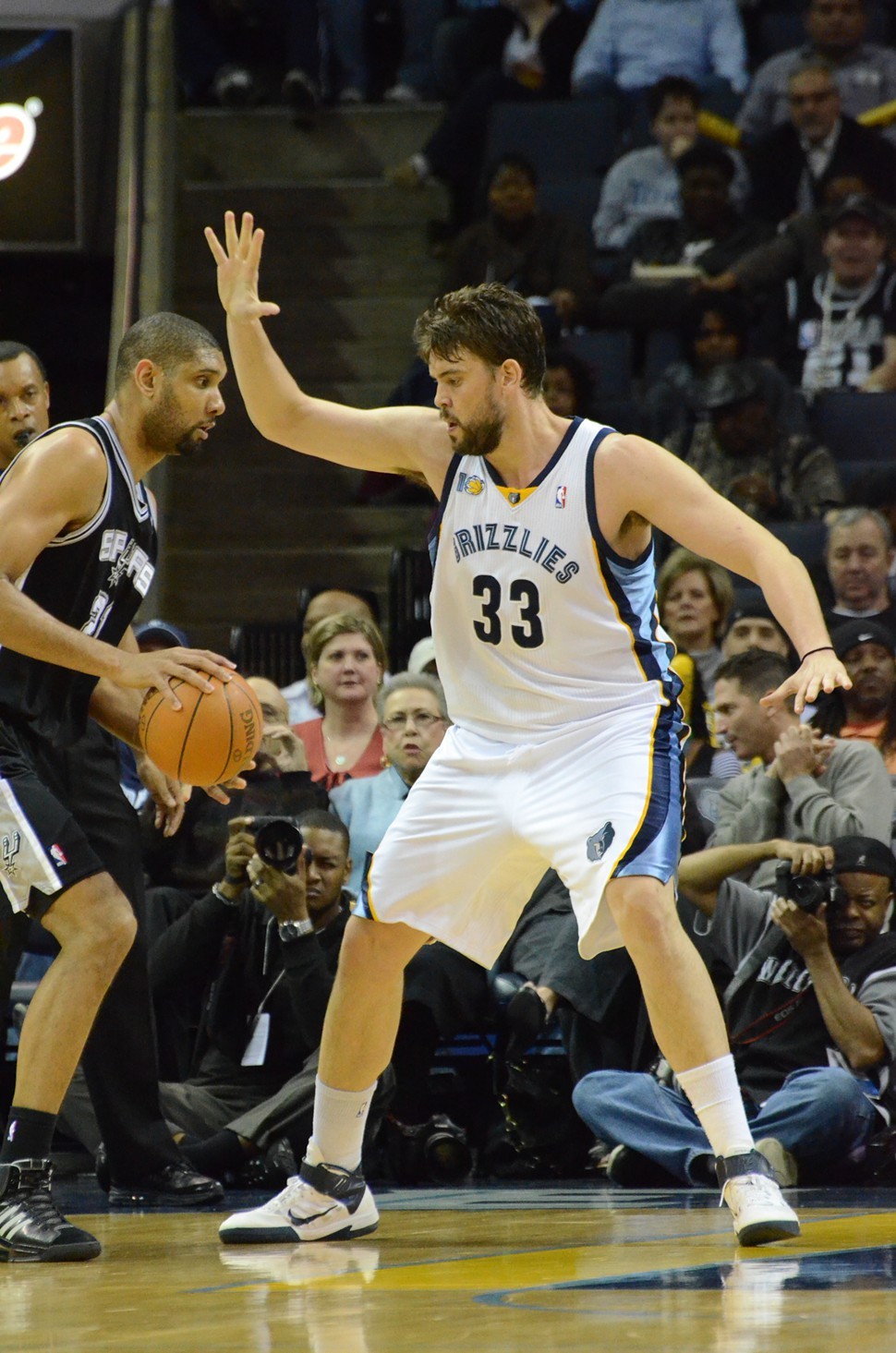 It's Not April Anymore: After going 7-6 in 13 playoff games against the Spurs and Thunder this spring, the Grizzlies are now 0-6 against them this season. At least there's only one regular-season game to go — in April in San Antonio — against these teams. Monday night, the Spurs were without Manu Ginobili and the Grizzlies had Rudy Gay (more on that in a minute), but the Grizzlies team that took the floor Monday night was absent six players (Zach Randolph, Darrell Arthur, Tony Allen, Greivis Vasquez, Shane Battier, and Sam Young with a DNP) who played significant roles in the playoff series win over San Antonio.

Fatigue and Bench Exposure: The loss to San Antonio underscored problems the Grizzlies have with their rotation in terms of starter workload and a lack of reliable bench production. Spurs stars Tim Duncan and Tony Parker played 32 and 37 minutes, respectively. By contrast, the Grizzlies' primary starters — Gay (45), Marc Gasol (42), and Mike Conley (41) — were all over 40 minutes. Was fatigue a factor in a fourth quarter in which the Spurs outscored the 22-11, erasing a lead the Grizzlies had built with a spirited third quarter? Impossible to say for sure, but the Parker and Duncan sure looked fresher than Gasol and Gay in particular at the end of the game. And, for the first time, Lionel Hollins acknowledged that he needs to put more emphasis on managing minutes.

The reason Gasol, Gay, and Conley play such heavy minutes, of course, is that injuries have sapped this team's depth and Hollins hasn't trusted his bench with significant playing time. The causal question: Does Hollins not trust the bench because they haven't played well or have they not played well because of too short a leash? My instinct is that it's a big of both. Look at the Spurs, getting big contributions from such obscure-to-most role players as Tiago Splitter, Kawhi Leonard, Matt Bonner, and Gary Neal. The Spurs not only find players at the team-building margins. They clearly do a great job of developing those players and finding roles for them.

The Grizzlies' record is decidedly mixed on both fronts, but while I think Hollins and his staff could possibly do better in using what they have, the bigger issue at the moment is probably a lack of bench talent, with four players on the active roster in that game — rookies Jeremy Pargo and Josh Selby, journeyman-at-heart Hamed Haddadi, and the since-waived Josh Davis [who played well] — that are, for now, marginal at best NBA talents. Added to that are three players — Dante Cunningham, invisible starter Quincy Pondexter, and DNP-er Sam Young — whose size and skill sets offer too much duplication for all three to be useful, and a starter in Marreese Speights who has lately been hurtling back to earth after a strong start with the team.

Rudy's Regression: Rudy Gay kept the Grizzlies afloat offensively in the second quarter, scoring 10 points on 5-7 shooting at a time when not much else was working and the Spurs were threatening to open up a big lead. But Gay wilted in a fourth quarter in which the Spurs reversed a six-point Grizzlies lead to take back the game. Gay was 1-9 in the 4th quarter, while O.J. Mayo nearly matched him with a 2-9 performance. Fatigue may have been an issue for Gay with his heavy minutes, but he's struggled to be the kind of closer the Grizzlies need for much of this season.

While Gay's surface numbers — 18.4 points per game — are in line with his norms, his efficiency is off, with what is currently a career low true-shooting percentage (.495) and a turnover rate (12.0) that is his highest since his rookie season. He's getting stripped on drives more than I can ever remember and just hasn't seemed as sharp or confident as he did pre-injury, especially late in games. Gay seemed to have found a comfort zone in the middle of last season as a secondary scorer and ball-handler who impacted the game in the flow. With Randolph out, he hasn't been able to return to that role but has had to come back as a de facto go-to guy. Fans may demand he be that. He may want to be that. But it's becoming increasingly clear if it wasn't already that that's not what he's best suited to be. But until Randolph returns and the pecking order can hopefully return to what it was a year ago, the Griz need to survive perhaps by getting a little more from Gay while also demanding a little less. (For instance, in the fourth against the Spurs, the team seemed to go away from the generally effective Conley-Gasol two-man game too much while Gay and Mayo were searching for — and missing — shots.)

Elements of Style: Monday night may have been a disappointing game from a purely Grizzlies fan perspective, but from a basketball perspective — especially if you love tough, fundamentally sound post play as much as I do — it was great to watch Tim Duncan and Marc Gasol both play well in a head-to-head match-up. Duncan may not be quite what he was at his all-world peak, but he showed Monday night that he can still be masterful in spots, especially on the defensive end, where he shut the Grizzlies down in the first half, including snuffing out two Rudy Gay dunk attempts, and at the very end, where he pinned a Gasol shot attempt against the glass. He finished with 19 points, 17 rebounds, 5 blocks, and numerous reminders of his greatness.

And Gasol was stout too, scoring a game-high 22 points on 8-14 shooting to go with 9 rebounds, 2 assists, 2 steals, and 2 blocks. Three memorable Gasol plays: A first quarter post destruction of Tiago Splitter with an up-and-under into a reverse lay-up. A pick-and-roll with Conley that resulted in the rare halfcourt alley-oop dunk for Gasol. A fourth-quarter play where Duncan shaded onto a posting Gay and Gasol responded with a rumbling spin move down the middle of the lane for a lay-up. Plays like these are hoops-addict gifts regardless of the ultimate game outcome.

Team Teetering: The Grizzlies are two games out of a Western Conference playoff spot with 41 games to play, so now is not the time to deploy any “must win” cliches. But the next two-and-a-half weeks before the All-Star break is an important stretch for this team. Starting with Monday's game against the Spurs, the Grizzlies were facing a 10-game stretch with eight games at home and the road games at Houston and at New Jersey. Many of these games — Minnesota, Utah, two against Houston the most important — are against the most important playoff-race competitors. The Grizzlies are a good stretch away from launching themselves back into the thick of the playoff race and a bad stretch away from falling back with Golden State and Sacramento among the lower rungs of the conference. A winning record — and they're 0-1 after Monday — in this 10-game stretch would set them up well to contend when and if Randolph returns. A losing record in this stretch will portend very poorly for the team's chances.

RUBIO!: If you're debating about a walk-up trip to FedExForum during this current five-game home stand, tonight would be a good night. Not only is it an important game that the Grizzlies will be favored to win, but it's one of two chances you'll get this year to see arguably the most exciting and interesting new player in the league, Wolves rookie Ricky Rubio. Young Ricky is an erratic shooter — though he hasn't struggled in this area quite as much in his rookie season as many expected — but has the passing gene like few players ever:

Rubio is currently third in the NBA in assists per game and first (just ahead of Mike Conley) in steals per game. He's a special talent that is also particularly fun to watch.

Match-Up Issues Tonight: The Wolves won last night without star forward Kevin Love, who will also miss tonight's game while serving a league suspension, but were only able to best the struggling Sacramento Kings by two points in Minnesota. Coming into Memphis on the second night of a back-to-back set without their best player, they should be at a disadvantage even given the Grizzlies recent woes.

One thing that is different about the Wolves now compared to when the Grizzlies beat them in Minnesota early in the season is that they're starting a two-point-guard lineup in Rubio and Luke Ridnour. This means that, if Tony Allen returns after missing the last two games with hip and knee soreness — and Tony tweeted today that he would be a game-time decision — then Allen will probably check Rubio, at least to start and finish the game. And that match-up should boost the entertainment potential of the game even more.

An unheralded player to keep an eye on for Minnesota is second-year center Nikola Pekovic, who is on an upswing. Pekovic has averaged 16 points and 10 rebounds on 66% shooting over his past five games and stepped up with 23 and 10 in Love's absence last night.

The Wolves play a fast-paced style, but can struggle at times with turnovers and with allowing fastbreak opportunities. The Grizzlies thrive by getting transition baskets off turnovers. So if the stars align tonight, the potential is there for both an entertaining and effective performance from the home team.

Josh Davis Cut: The Grizzlies waived forward/center Josh Davis yesterday. This was not a surprising move. Davis' non-guaranteed contract was about to become guaranteed for the season and the Grizzlies are bumping up against the luxury tax line. Don't be surprised if the Grizzlies sign a frontcourt player — maybe even Davis again — to a 10-day contract or two while waiting for Randolph's return. But given the potential tax implications, I don't think they'll fill that roster spot permanently.