Postgame Notebook: Grizzlies 103, Nuggets 102 — Where the Griz Build and Lose a Big Lead and Dante Cunningham Drops a Bomb. 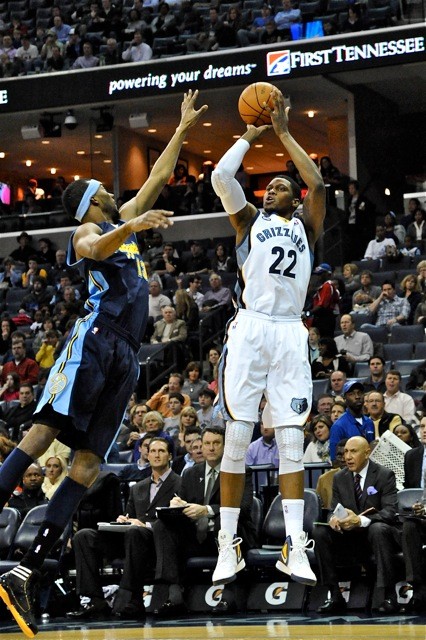 The Lead: The Grizzlies survived perhaps one of the wildest games in franchise history, one where they lead by as much as 23 points and didn't trail until late in the fourth quarter, when Denver held four different one-point leads. Dante Cunningham's tip-in with 0.2 seconds on the clock averted disaster and the win — coupled with a Houston Rockets loss to the Minnesota Timberwolves — moved the Grizzlies into 6th place (with help from tiebreakers) in the Western Conference.

It was a game that featured some of the best basketball this team has ever played, and also some of the most frustrating.

The first nine minutes showcased some of the best offensive execution I've ever seen. The Grizzlies scored 30 points on 13 baskets, all either three-pointers (four) or lay-ups/dunks (nine), all but one of the baskets assisted. Marc Gasol scored or assisted on six of the first seven buckets.

“The start was what won the game for us,” Hollins said, at which time the early fireworks seemed to have happened weeks ago. “They were having to play from behind.”

The Grizzlies led by 19 at the end of the first quarter and had pushed the lead to 23 early in the second, and then Corey Brewer happened. The Nuggets forward, starting in place of injured Danilo Gallinari, hit three three-pointers in the span of a minute, a one-man 9-0 run that slashed the Grizzlies lead to 14.

The Grizzlies were able to maintain a double-digit lead for the rest of the third quarter, but in the fourth , the Nuggets steadily worked it down, going on an 18-10 run to take a one-point lead — their first of the game — on a Brewer tip-in at the 4:34 mark.

From there it was an alternately frustrating and exciting finish, featuring seven lead changes (no lead greater than 2 points), three ties, two terrible Grizzlies turnovers, six straight points from Rudy Gay (each score a go-ahead score), and, finally, the ball in the Grizzlies hands, down one, with 24.6 seconds left to play.

Man of the Match: Lots of Grizzlies players had busy stat lines tonight: Gay lead the team with 20 points, 8 rebounds, 6 assists, and 3 blocks. Gasol flirted with a triple-double (okay, maybe flirted with a quadruple-double) with 16 points, 14 rebounds, 8 assists, 7 turnovers, and 3 blocks. Mike Conley had 16 points, 7 assists, and 5 steals. O.J. Mayo had 17 points off the bench. Marreese Speights (12-10) had a double-double. And in a game that contained multitudes, most of them balanced plenty of good plays with plenty of bad ones.

On the final Grizzlies possession, the ball went to Gay, who had scored the previous six points for the team, but the played didn't work as planned.

“Rudy was going to get the ball at the end,” Hollins said. “We wanted to get him the ball in the middle of the court, but didn't do a good job of executing. But he went and got the ball.”

Gay drove to the baseline and drew a double team, rising up at the end of the shot-clock for a mid-range jumper. The shot landed on the front of the rim and bounced up, where Dante Cunningham tipped it in with 0.2 seconds left, giving the Grizzlies the win — after a broken-up Nuggets in-bounds play — at 103-102, and provoking the ritual playing of the Gap Band at FedExForum.

Cunningham's locker is right next to Tony Allen's and when Cunningham came out of the showers, Allen was sitting there, his feet in a cooler, the box score laid out on top of the ice.

“What did Dante have? One offensive rebound?,” Allen said, looking down at the sheet and then slapping hands with Cunningham. “God damn it. That was a [expletive]. That should have a 'GW' [for “game winner”] next to it.”

And, while TV cameras and microphones surrounded Cunningham's locker for maybe the first time all season and Cunningham gave all the standard-issue quotes, teammate Jeremy Pargo bobbed happily around the media scrum, making faces and trying to get Cunningham to lose his cool and laugh.

Cunningham has been a very good signing for the Grizzlies, but this was his signature moment.

“He's our glue guy,” Gay said. “He can guard anybody. Get rebounds. Pressure the point guard.”

Nightly Number: The Grizzlies managed to win this one despite allowing 28 points off 19 turnovers, and two of these instances were what Hollins called “near killers.” Twice in the last three minutes, the Grizzlies got a stop and secured a defensive rebound only to lose the ball in transition. The first time, Marc Gasol threw an outlet pass in the direction of both Mike Conley and Tony Allen and somehow neither of them caught it. More costly was a sequence in the final minute, with the Grizzlies leading by one. Rudy Gay blocked a Corey Brewer lay-up attempt and Gasol grabbed the defensive rebound, but Conley lost the ball on the sidelines after Gasol's outlet pass and Nuggets point guard Andre Miller streaked in for a lay-up attempt that Brewer tipped in to put the Nuggets up one. If not for Dante Cunningham's game-saving tip-in, that would have been the winning play for Denver.

The Match-Up: It was a very up-and-down night for Rudy Gay and a very eventful match-up with Corey Brewer. Gay dominated the match-up in the first half, with 14 points and 7 rebounds as Brewer grabbed one board and didn't attempt a shot.

Initially the third quarter seemed like more of the same, with Gay opening the quarter with consecutive sequences in which he blocked a shot at the defensive end and followed with assists for layups at the other end.

But then, a few seconds later, Brewer exploded with his flurry of threes, adding two more later in the quarter en route to scoring 18 of the Nuggets' 30 points in the third. Meanwhile, Gay went into a funk offensively, shooting 0-4 in the quarter, with most shots missing badly.

Predictably, Brewer's scoring outburst provoked a lot of ire — at least on my Twitter feed — over Gay's defense. But, while I wouldn't say Gay couldn't have played him better — the middle of Brewer's initial trio of threes came, as Hollins pointed out, after Gay had lagged behind at the other end, arguing a non-call — this was more related to scheme than individual defense.

“He got hot and hit some buckets,” Hollins said, explaining that “they were attacking the basket with two shooters in the corners.” Initially, Gay was helping off Brewer — who isn't exactly Ray Allen — on Nuggets' drives, and getting burned. After the third three, Gay turned to the Grizzlies bench and made a comment about switching up the scheme to stay at home on Brewer.

For what it's worth, Brewer's next two threes came with Tony Allen on him — one on a cross-match in transition, the other with Gay out of the game — as did the two Andre Miller threes in the fourth quarter. But those realities about defensive schemes and match-ups don't fit into the “Allen is a great defender, Gay is a lazy defender” narrative some fans prefer. That narrative is often right, but it wasn't quite the story tonight. (Tony Allen's post-game take, with a smile: “[Brewer] just got lucky. I'm not gonna praise him.”]

In the fourth, both players were important offensively. Brewer scored 8 points, with two putbacks in the final few minutes to give the Nuggets leads. Gay had two assists early in the quarter, but played his best — despite missing the shot Cunningham tipped in — in the final couple of minutes, scoring six points on three straight possessions and blocking a Brewer lay-up attempt to keep the Grizzlies alive despite their late turnovers.

The Jacob Riis Report: Despite their getting down early, this game illustrated what Denver is all about. They're deep. They play with energy. They play uptempo. And they look for lay-ups (60 points in the paint) or threes (24 points from long-range). Even missing a couple of key players in Danillo Galinari and Nene, they have a bench full of players who can step up and make a difference. Tonight that meant Brewer (game high 26 points), Chris Anderson (5 rebounds in the fourth quarter), and rookie Kenneth Faried, who came off the bench for 18 points and 10 rebounds (5 on the offensive end) in 25 minutes. And the Grizzlies were fortunate the Nuggets only played Faried 25 minutes, because his combination of strength, quickness, and energy was too much for the Grizzlies' front line when he was in the game.

“He do got a lot of grit and grind in him,” Tony Allen said about Faried after the game. “He played good in a loss. That's the most important word: loss.”

With Cleveland rookie Kyrie Irving not coming to FedExForum until late April and Ricky Rubio's lone appearance so far a dud, Faried is the most impressive rookie I've seen in person so far this season.

Where They Stand: The win improves the Grizzlies to 17-14, the same record as both the Nuggets and the Houston Rockets. But since the Grizzlies currently hold tiebreakers against both teams, the Grizzlies find themselves in 6th place in the Western Conference.

Looking Ahead: The Grizzlies will host the Golden State Warriors Saturday night, who lost 110-87 in Oklahoma City Friday night and may be without top scorer Monta Ellis, who suffered a leg injury against the Thunder.