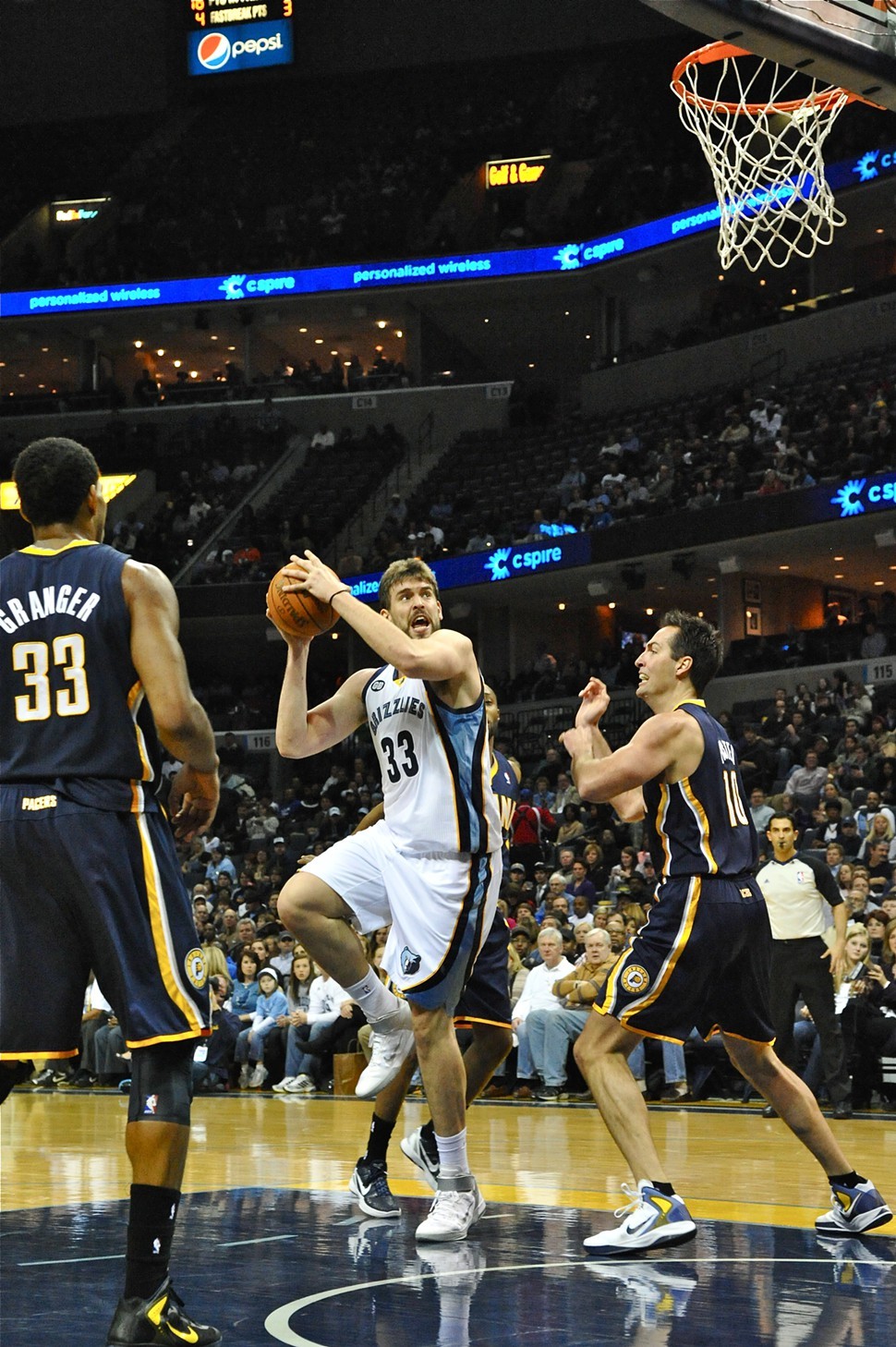 Over the next couple of days, I'm going to be putting up a series of snapshot posts breaking down the roster as we enter the season's second half. Let's start with the Grizzlies' current All-Star, center Marc Gasol:

(Note: Stats in these posts are drawn from a multitude of sources, with NBA.com's Advanced Stats site as the primary resource. Others used are: Hoopdata.com, ESPN.com, 82Games.com, BasketballValue.com, and TeamRankings.com.)

Gasol's season probably seems like a breakout to many, but it's really more of a rebound. Two years ago, while Zach Randolph was making the All-Star team and Rudy Gay was scoring around 20 points a game, I was telling people that Marc Gasol was actually the best all-around player on the team. And when he missed most of the season's final month and the Grizzlies' playoff hopes dissolved, his value was underscored.

Last season, Gasol's performance was down, something that was mostly forgotten when he came up big in the playoffs.

This season, Gasol is mostly back to where he was in '09-'10, with primary indicators like his Player Efficiency Rating, scoring and rebound rates, and on-court/off-court stats all returning to what we might now considered to be his norms.

But beyond just playing better, Gasol has stepped up in the absence of Zach Randolph by playing more, a sharp decline in his foul rate and seemingly better conditioning abetting a minutes increase from 31.9 per game last season to 38.1 so far this season, fifth highest in the league.

That better conditioning has also helped Gasol re-emerge as a major force on the defensive end, where his 2.2 blocks (fifth overall) and .97 steals (third among centers) per game only begin to tell the story. With great court-awareness, a tremendous motor, and a better ability to defend pick and rolls and step out to harass shooters than you'd expect from someone his size, Gasol sometimes plays team defense like a bigger Shane Battier. And his defensive rebound rate, in particular, is up this season.

While he's not quite the physical monster that fellow All-Star centers Dwight Howard and Andrew Bynum are, Gasol's joined them as the only members of the 10 rebound/2 block club at the season's mid-point, while showcasing a more developed all-around game — acting as a secondary playmaker (including averaging better than 5 assists in the final five games before the break) and making more liberal use of his excellent mid-range touch.

If there's a blemish on Gasol's record in the first half, it's the career-low 49% shooting percentage. But that deserves some context. I'd say it's at least partially the result of taking over Randolph's duties as the team's #1 post option, meaning Gasol's been more likely to draw the other team's best frontcourt defender — and double teams — and that there's been more onus on him to create shots. And it's also the result of the team using Gasol's mid-range game more. After taking 21% of his field-goal attempts from mid-range last season, Gasol's mid-range attempts are up to 32% this season, while his accuracy on those shots is also up, from 39% to a team-best 44%.

You would assume that, with Randolph scheduled to return in the next week or so and Marreese Speights moving to a bench role, Gasol's hefty workload will decrease. And it probably will. But I wonder how much. The reality is that the Grizzlies tend to fall apart whenever Gasol heads to the bench — particularly on the defensive end, where a Randolph/Speights pairing seems the most problematic.

Even with Randolph back, in the middle of tight playoff race, will the Grizzlies be able to afford to give Gasol much more rest?