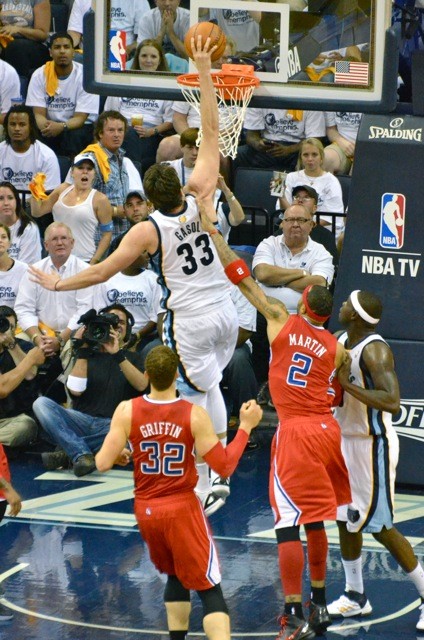 The roar that went through FedExForum when Zach Randolph walked to the bench late in the first quarter was one of relief as much as excitement. Facing elimination on their home floor in the fifth game of this first-round series with the Los Angeles Clippers, the Grizzlies had spent the better part of a week in the wilderness. The team's biggest offensive advantage against the Clippers and one of the twin pillars of the team's identity — the two-man post attack of Randolph and running buddy Marc Gasol — had been mysteriously missing.

But when Randolph took his first breather the Grizzlies led 35-22 and he and Gasol had combined for 27 points on 12-14 shooting. This was a return to the inside game more ferocious than any reasonable fan's wildest hopes. They attacked Clippers star Blake Griffin — a dynamic scorer but mediocre defender — relentlessly, happily feeding whichever post scorer Griffin guarded. As much as the upcoming Van Halen concert being advertised around the arena, this was a reunion show, and mixed in with the palpable relief in the building was a mix of gratitude (“We missed you guys so much!”) and frustration (“Why did it have to come to this?”).

That first quarter was a thrilling display of offensive execution — eight of the post duo's 12 made field goals were either assisted or off offensive rebounds; this was not an iso show — matched by staunch defense, especially from Tony Allen and Gasol on the Clippers' stars, Chris Paul and Griffin, respectively.

The first quarter was reminiscent of the series-opening explosion early in Game 1. And, troublingly, so was the rest of the game.

Asked about going away from the post game in the second half, where Gasol and Randolph were 0-7 from the floor, Lionel Hollins shot back, “If they took seven shots and made none that should tell you why we went away from it.”

But that wasn't really it. As in Game 1, the Clippers made adjustments. They pushed Randolph and Gasol further out. They pressured ball-handlers full court — forcing the Grizzlies deeper into the shot clock before they were able to begin a play, allowing less time feed the post. They worked harder to deny entry passes. And the Grizzlies struggled, once again, to counter these adjustments.

As in Game 1, an explosive first quarter helped build a big lead that the Grizzlies couldn't quite hold.

This time, the Grizzlies lead by a high of 24 points — 75-51 — with 3:02 to play in the third quarter. Over the next 8:48, the Clippers went on a 24-6 run to cut the lead to 81-75 midway through the fourth quarter. Gasol and Randolph were on the bench for much of this Clippers run and managed only one field-goal attempt between them in this stretch. Two of the Grizzlies' three field goals during this Clippers run were long jumpers from Marreese Speights.

O.J. Mayo, forced to play extended minutes at point guard in the third quarter after Mike Conley got his fourth foul, struggled terribly with Paul's pressing defense. Mayo had two turnovers, two missed shots, and a goal-tending call in the final three minutes of the quarter. (Mayo has now shot 3-20 with 10 turnovers in his past three games, and you have to wonder if the point guard duties are negatively impacting his shooting.)

Meanwhile, Chris Paul and reserve shot-maker Mo Williams were tag-teaming the Grizzlies, scoring 21 of the Clippers' 24 points, including all of their field goals. (And, if you're wondering, yes: Tony Allen was on the bench for most of this Clippers' run. Allen, curiously, played only 17 seconds in the fourth quarter.)

Unlike Game 1 — which was fresh in everyone's mind as the lead dissipated — the Grizzlies were able to hold on this time. The lead never got below six, with Mike Conley and Rudy Gay scoring just enough on drives to enable the victory.

After his three-quarter nightmare in Game 4, Gay was more of a secondary player for most of Game 5, but also — perhaps not coincidentally — a more efficient one. Gay's first two shots were long jumpers — both misses — and he got an earlier-than-usual but deserved yank in the first quarter. But he settled down as the game wore on, going 6-12 the rest of the way, with nine of his remaining field-goal attempts — and all of his makes — from inside 15 feet. Gay's jumper has been a mess for most of this series, but he's been pretty good from 15 feet and in and, tonight, he shot less frequently while staying within that range more often.

Gay also figured into perhaps the most unlikely — and, as a result, redemptive — play of the night. With Clippers' forward Reggie Evans torturing the Grizzlies with four offensive rebounds off missed free throws in the two games in Los Angeles, Gay pulled off this trick late in the fourth quarter, snagging a missed Randolph free-throw and then completing the ensuing possession with a driving lay-up to seal the game.

Though the team's defense was sharp all game — holding the Clippers to 80 points on 37% shooting —the Grizzlies got some help in finally holding a lead. The Clippers nearly imploded in the late third quarter, getting four technical fouls in the span just over a minute — though Mayo only converted 2-4 on technical free-throws and the Clippers' run came immediately after the series of techs, something else that created some Game 1 deja vu.

Possibly this conflagration got the Grizzlies out of a groove. Or so Hollins thought: “Offensively, we lost our poise in the third quarter,” Hollins said. “They were fussing with the officials and getting technicals, and we were getting into it with them and kept committing fouls.”

More important — not just for this game, but potentially for Friday's Game 6 — were a couple of in-game injuries to the Clippers' two best players. Griffin suffered a sprained knee late in the third and, though he played through it, he wasn't effective, missing his only shot and grabbing only one rebound in nine fourth-quarter minutes. Paul was apparently affected by what was thought to be his pre-existing groin problem but was reported post-game as a hip issue. Again, Paul played through it, but wasn't effective, shooting 1-2 with one assist in the final quarter.

And along the way, the Clippers simply missed some shots. After making a series of shots to bring his team to within six, Williams then missed his next three attempts, with Paul, Randy Foye, and Caron Butler also missing jumpers late. For most of this series, the Clippers have been making tough shots, especially late in the game. Wednesday night, the shots weren't falling as frequently.

Looking ahead, this win not only keeps the series alive, but gives the Grizzlies some additional reasons for hope: The return of the post game, at least temporarily. A more reigned-in Rudy Gay. Their best overall defensive performance — with Tony Allen and Quincy Pondexter both doing good work on Chris Paul even before Paul's injury. And those new injury questions for the Clippers.

But this win also leaves some doubts: The Grizzlies may have found their post offense, but they lost it again after the first quarter. And you can bet the Clippers are going to really apply pressure at the point, especially when Conley is out of the game. Either Mayo needs to handle this pressure better, or the Grizzlies will have to try something else, and without great options.

But it's still a series. Late in the game, an announced sellout crowd erupted into a loud, spontaneous chant of “See You Sunday” — when a Game 7 would be held in Memphis, if the Grizzlies can win Friday in Los Angeles. Even 11 years into this enterprise as an NBA city, Memphis continues to encounter franchise firsts. A first home Game 7 would be wild. That's possible now.