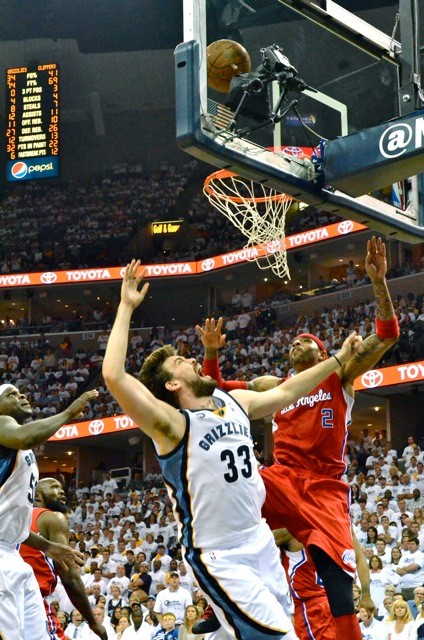 After posting my Game 7 story early Sunday evening, I had to put it all away — absent a reluctant trip to Monday's final media session — until we wrapped on this week's paper yesterday afternoon.

But, with that out of the way, I sat down Tuesday afternoon, before my weekly appearance on The Chris Vernon Show, and went through the last 15 minutes of the game again. This gave me not only a different look at the action than I got from my upstairs media seat, but the ability to pause, rewind, re-watch, etc. And four things jumped out to me as major factors in the Grizzlies' struggles, particularly on the offensive end, where the team mustered only 16 points on 4-18 shooting in the final quarter:

1. The Arenas/Haddadi Substitutions: The Grizzlies used lineups at the end of the third quarter and at the beginning of the fourth quarter that they hadn't used in the series to that point, with Marc Gasol and Hamed Haddadi paired at the end of the third and Haddadi and Gilbert Arenas paired to start the fourth. And re-watching confirms that the Haddadi and Arenas substitutions really hurt the team.

Arenas hadn't been effective in his limited minutes all series, of course. But, in fairness, Lionel Hollins had played Haddadi important second-half minutes in two other games — 4 and 6, I think — and gotten good results from this move. But it didn't work in Game 7, and I think it had a lot to do with the situations in which Haddadi was placed. Haddadi is a quality backup center when he sticks to within five feet of the hoop, but in this game he was routinely forced to handle the ball on the perimeter — usually after running a pick-and-roll with O.J. Mayo, in which Mayo was trapped — which, unsurprisingly, resulted in turnovers and low-percentage shots.

2. Fatigue was Real: In his post-game press conference, Hollins cited fatigue as a factor in his late-game substitutions, and that certainly seems legitimate. On the game, the four players who logged the most minutes — Rudy Gay (40), Mike Conley (40), Zach Randolph (39), and Marc Gasol (37) — were all Grizzlies. Chris Paul (35) was the only Clipper to top 30 minutes. The Clippers' superior bench play was one of the stories of the series and it was definitive in Game 7. There are a couple of times in the fourth quarter where Conley, playing with flu-like symptoms, looks like he's going to collapse. The play before Randolph controversial trip to the bench in the middle of the quarter, he was jogging back on defense while Kenyon Martin was streaking past him for a dunk. On the crucial play late when O.J. Mayo got a steal and had a chance to cut the Clippers lead from six to four, both Chris Paul and Reggie Evans tracked him down to contest his shot. Not a single other Grizzlies player even crossed half court.

3. Gasol and Z-Bo Played Only Five Minutes Together: The immediate focus during and after the game was on the time Randolph spent on the bench in the fourth. More important, I think, was that Randolph and Gasol played only five minutes together in the final quarter. What makes the Gasol/Randolph post game so special, even with a limited Randolph, is how well they play as a tandem and how hard it is to defend both at the same time. The Grizzlies took a one-point lead into the quarter and were outscored 27-16. In the first four of the five minutes Gasol and Randolph were on the floor together — before a final minute when the team was forced to foul and send the Clippers to the line — they played them even. My biggest “Monday morning quarterback” take: Fatigue be damned; with the season on the line, I would have put them both out there for the quarter and lived or died with it.

4. Mayo and Conley Were Worthless Offensively: Even though I think the team should have put Gasol, Randolph, Gay, and Allen out there for the quarter, I'm not at all convinced that would have been enough. You needed a point guard too, and Hollins was left without a decent option: Arenas was ineffective all series. Mayo had been ineffective since Game 2. And Conley, who had been the team's most consistent player all series, was a dead man walking in Game 7. Those guarded combined to shoot 0-9 with one assist in a combined 18 fourth-quarter minutes. Not sure you overcome that.

The Non-Factor: One thing that I don't think was a factor down the stretch in Game 7: A lack of coaching focus on the post game. Zach Randolph had made comments after the game about the team not calling post plays down the stretch and these comments have been given a little play in the local media. Obviously, I wasn't in the huddles, but I can watch film, and there doesn't seem to be much evidence that the team wasn't putting a focus on trying to work inside. Quite the contrary. If the Grizzlies didn't do a good job exploiting their post offense in the fourth quarter of this game, it seems to have had a lot more to do with personnel, execution, and decision-making than it did with strategy or play-calling.

Randolph and Gasol combined for five field-goal attempts and six free-throw attempts in their combined 17 fourth quarter minutes, but I can point to at least five other offensive possessions in the quarter that could or should have resulted in shot attempts for one of the two:

*Two possessions in which Gasol drove to the basket and was stripped, resulting in a turnover.

*A possession where Randolph got the ball, posting Reggie Evans on the left block. No double team came and Randolph could have turned to face and gone one-on-one against Evans. Instead, he chose to make what was, theoretically, a good basketball play: Feeding Conley as he cut into the paint. Of course, Conley had been missing layups the whole game, and that's what happened here.

*A possession where Randolph was posting Evans on the right block, with Gay and Mayo spotting up on the weak side. Normally, Conley and Gasol would be involved in the play with Randolph. But this time, early in the quarter, it was Arenas and Dante Cunningham. Evans fronted Randolph, Nick Young sagged off Arenas, and Kenyon Martin sagged off Cunningham to discourage a lob. Arenas had nowhere to go with the ball. Cunningham flashed to the free-throw line to get it, but, unlike perhaps with Gasol, he wasn't able to make a play. Instead, Cunningham pitched it out to Mayo, who went one-on-one with a rotating Martin, who bottled Mayo up and forced a contested jumper. Miss.

*A possession where Randolph pinned Evans in front of the rim early in the shot clock and called for the ball, just as Mayo was coming off a high pick from Gasol. Mike Conley routinely zips low bounce passes to Randolph in these situations. Mayo either didn't recognize or looked it off. He rose up for a 17-footer instead. Miss.

If there's anything surprising about the fourth quarter, it's how little Rudy Gay was involved. Gay had scored 10 points on 4-7 shooting in the third quarter. Discounting a desperation three at the very end, he only had one shot in the fourth: A good shot (10-footer) that he missed badly. And he didn't really touch the ball much. Re-watching it, it's unclear who's to blame for this disappearing act — Gay for not being more assertive, the guards for rough decision-making, or a strategy that, contrary to belief, might have been too focused on working inside.

And that's a wrap on that. I'll return later today — or perhaps tomorrow — with a quick look at the roster as we head into the off-season and thoughts on the direction the team could or should take.