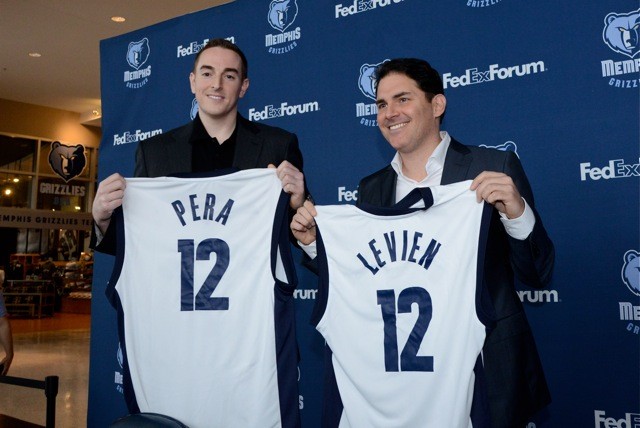 At 2:30 on Monday afternoon, only hours after being introduced as the new Chairman and controlling owner of the Memphis Grizzlies, 34-year-old Robert Pera was ready for game time. Not his new team's home opener against the Utah Jazz later that night, but his own. Pera, wearing full Griz workout gear, was exiting the Westin Hotel across the street from FedExForum, entourage in tow, on his way to the arena's practice court to put up some shots. Not ten feet away, departing Grizzlies owner Michael Heisley — not invited to the public press conference and recently disinvited to speak to fans before the game — was having a “last supper” of sorts, alongside his wife, right-hand man Stan Meadows, and other confidants. Heisley was not aware of Pera's presence — the two had only spoken twice and not since the sale closed — and Pera seemed similarly oblivious. An hour later, while Pera was still on the practice court, hoisting up halfcourt shots and working on his turnaround jumper, Heisley was quietly saying goodbye to team employees.

The contrast between the two men on a day of head-spinning change for the Grizzlies organization seemed profound, much more so than just their 41-year age difference. It was also an exchange of excitable for calm. Logorrheic for terse. (After Pera's one-liner statement to fans before tipoff, NBA commissioner David Stern reclaimed the microphone to speak for us all: “That's it?”) Assertive for deferential.

It's been said — Stern echoed the sentiment in his pre-game press conference and I believe it to be true — that ownership sets the tone for an entire organization. That, in addition to luck and still-relevant market advantages, the NBA is about management. If fans want a good reason to be hopeful about the Grizzlies' future in the “Pera era,” the significant increase in local participation is at the top of the list, but the prospect of better management is next in line.

The Grizzlies are coming off the two best seasons in franchise history, but this success has obscured some real problems in an organization that has, for the length of Heisley's tenure, flirted with dysfunction. It's an organization that has too often been penny wise and pound foolish, pointlessly bickering over rookie-contract incentives while paying a premium every time they've re-signed or extended one of their own major players. As a result, they've muddled into a contending core via some luck, some high draft picks, and some smart gambles by incumbent general manager Chris Wallace, but keeping the group together is becoming financially unviable.

Heisley, often engaging and certainly committed to winning, had nonetheless fostered too much of an organizational free-for-all, with decision-makers competing for his ear — and then competing to get their sides of the story out later. The cheerfully combative Heisley seemed to personally thrive on noise and chaos, but I'm not so sure the organization did.

Pera and Levien inherit a staff full of good people who have been working under imperfect circumstances, all of whom are capable of being part of something better. But I won't be campaigning for anyone to keep — or lose — their jobs. I'm just campaigning for a stronger organization. One that's more cohesive, more progressive, more functional, and more intellectually diverse. One with more discernible long-range planning. In his first public statement after assuming control, Pera promised “a best-in-class organizational culture.” To make this happen he's deferred to the clearly bright, capable, and highly regarded Jason Levien, a former agent and executive with the Sacramento Kings who takes an unprecedented organizational role as CEO and Managing Partner, overseeing all aspects of basketball and business operations.

Certainly Levien overshadowed Pera all day on Monday, dominating the opening press conference and shepherding Pera through the motions of game night. And with that Pera seemed perfectly content.

Big questions remain, among them how much is Pera the visionary leader guiding the franchise and how much is he a willing vessel — for Jason Levien to get control of a team, for local minority owners to jettison Michael Heisley and further cement the Grizzlies in Memphis without shelling out the full price themselves. And how much does it matter? This already had a chance to be the best season in franchise history. Now, even more so, it promises to be the most interesting.

A version of this column appears in the November 8th print edition of The Memphis Flyer.