Postgame Notebook: Grizzlies 93, Rockets 85 — Tony Turns the Water Off and the Bench is Big

A Mike Conley three-pointer at just under the two-minute mark averted a possible collapse and the Grizzlies held on to extend their current winning streak to four following their opening night loss to the Clippers. 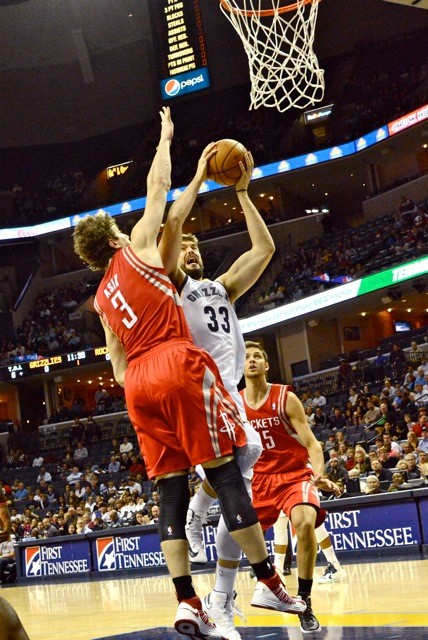 I asked in my game preview whether Rockets center Omer Asik could singlehandedly corral the Grizzlies post game and the answer, tonight, was mostly yes. The huge and very disciplined Rockets' defender altered everything around the basket in an opening quarter that saw the Grizzlies shoot 8-25, and two days after dominating the Milwaukee Bucks, the Grizzlies' three-man post rotation combined for a limp 27 points on 10-34 shooting. This isn't the first time we've seen Asik bottle up the Grizzlies' post game in this building, but in the past it's been off the bench and alongside another great frontcourt defender in former Bulls teammate Taj Gibson. This time, playing a career-high 40 minutes, Asik essentially did it on his own, and with the Grizzlies shooting 6-19 from three-point range, offense was a struggle for most of the night.

But if the Grizzlies' post players couldn't duplicate their Wednesday night feats, the team's bench could as the Grizzlies got yet another strong boost from their reserves.

The Grizzlies started the fourth quarter with a one-point lead and a lineup that featured the four rotation bench players (Jerryd Bayless, Wayne Ellington, Quincy Pondexter, and Marreese Speights) alongside Zach Randolph, and that group was finally able to amp up the team's energy and get into a groove, rattling off a 16-4 run in the middle of the quarter to build an ultimately insurmountable 12-point lead. Randolph, feeding off his own offensive rebounding, scored the first five points in this stretch, and then everyone else got into the act: Ellington hit a three and then followed that with a fastbreak layup off a Pondexter steal and Bayless feed. Bayless set up Speights for a long jumper and then capped with run with a fastbreak layup off a Pondexter steal and feed.

"I have a comfort zone with [the bench] so I'm not trying to feel around and change the rotation," Hollins said. "The rotation has pretty much been the same since we started the season. Our bench has been absolutely magnificent in every game but the first game. I keep saying, in order to do anything special, we have to have our guys come off the bench and do their jobs."

Man of the Match: Rudy Gay was the leading scorer with a game-high 21, and this time on a decent shooting night (9-19). Zach Randolph continued his double-double streak (15 and 14), but I'm giving this to Jerryd Bayless, who sparked the bench unit with 12 points (4-8 from the floor, 2-4 from three), 3 assists, 3 steals, and only 1 turnover. After struggling from long-range in the preseason, Bayless has now connected on a three-pointer in every regular-season game (7-14 overall) and his doing a solid job of protecting the ball, pushing the pace, and getting the team into their offense. He's also proven to be a fiery player, exhorting the home crowd on a few occasions tonight.

Nightly Number: If lackluster post play and great bench play both go against what has been the franchise norm in recent years, this was otherwise classic Grizzlies basketball: The Grizzlies forced 20 turnovers with help from 14 steals and ended up with a -11 turnover differential on the game, which, along with an 18-8 offensive rebounding advantage helping the team overcome a shooting disparity. Same as it ever was.

The Match-Up: Tony Allen vs. James Harden was the Main Event, and it didn't disappoint. The crafty Harden was able to bait the Grizzlies into a few fouls, going 9-10 from the line, but otherwise struggled. Allen was terrific on Harden in the first half, allowing one lay-up in the first quarter. Harden's only other basket in the half came after Allen picked up a couple of fouls on Jeremy Lin and Harden got past Quincy Pondexter for a dunk on the first possession after Allen went to the bench. 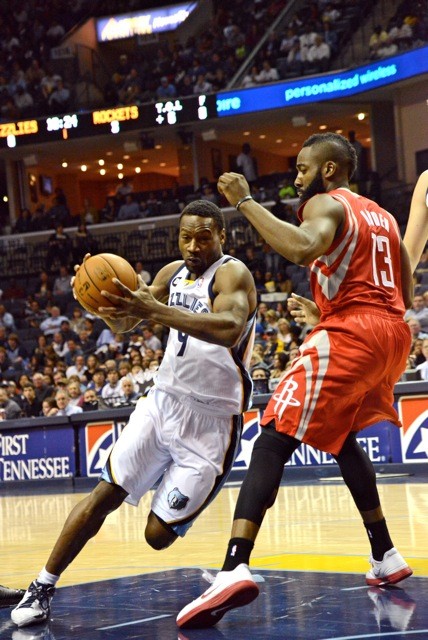 Then, in the third quarter, Allen really turned the water off, holding Harden scoreless while forcing turnovers that the Grizzlies were able to convert into points.

Allen's offense (3-9 tonight, and way too many early-in-the-clock jumpers) can be frustrating, but when he handcuffs the league's leading scorer — who finished with 18 points but on 4-18 shooting — it's more than worth the tradeoff.

Elements of Style: It was Military Appreciation Night, which gifted us with Zach Randolph in an American flag headband, which gave the Grizzlies the sartorial edge over Omer Asik's huge knee-pads.

More memorable, though were the first two classic Tony Allen bench celebrations of the season during the fourth-quarter run from the bench. On a forced turnover, Allen ran down the baseline doing spirit fingers before finding Jerryd Bayless to slap five. Later, after the Bayless fastbreak layup built the 12-point lead and the Rockets called a timeout, Allen streaked to center court searching for a teammate with whom to reenact Iceman King Parsons' finisher.

The Jacob Riis Report: The Rocket are both better and more interesting following the Harden trade, but I'm not buying them as a playoff contender, not in the West. The team lacks a real second scorer to take the pressure off Harden, and we're starting to see the results. There's no viable post scorer and the bench is thin and young. Not this year.

Tweet O’ the Game: I can't get Willie Nelson out of my head every time I see Z-Bo with the headband. — @TigerBlueBlood

Rockets announcer and former three-point sniper Matt Bullard seen rocking out to Freedom, the Millington Naval outfit that served as the pre-game house band. Apparently Bullard has a taste for Southern boogie jams. And who among us doesn't like a little freedom rock now and then?

Where They Stand: The Grizzlies improve to 4-1 and were, pending late-night action, tied with the San Antonio Spurs atop the Southwest Division. The 4-1 start is the franchise's best since moving to Memphis.

Looking Ahead: One of the biggest and one of the most compelling games of the year is up next when the defending champion Miami Heat bring their explosive small-ball to town Saturday to face up with the Grizzlies' traditional, post-based game. It's an early 5 p.m. tip on Sunday.

I heard speculation from a Grizzlies employee before the game about Michael Heisley possibly having interest in buying the Milwaukee Bucks — which would be close to his home in the Chicago suburbs. Then, during the game, ESPN.com's Marc Stein reported as much.

The Grizzlies extended their franchise-record regular-season home winning streak to 13.