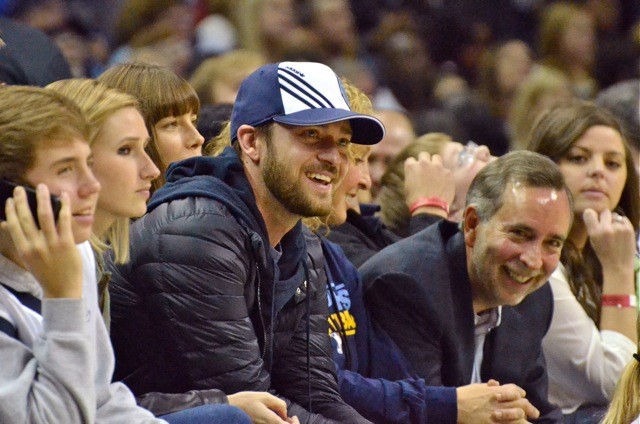 The Lead: The Grizzlies overcame erratic bench play and prolific Lakers three-point shooting for an impressive victory that put the team back atop league-wide standings at 9-2.

After taking a 9-8 lead about three-and-a-half minutes into the game with a step-back three-pointer from Rudy Gay, the Grizzlies never again trailed. Memphis took a 16-point lead into the second quarter, but the Lakers went on a 15-2 run, led by three-pointers from Antawn Jamison, Chris Duhon, and Metta World Peace. The Lakers cut another 16-point Grizzlies lead down to 5 midway through the fourth quarter off back-to-back Kobe Bryant three-pointers, but with Bryant trying to take over the game, Tony Allen tightened up his defense and forced Bryant into bad long-range misses on the next two possessions to hold the lead. In the final two minutes, Mike Conley calmly sunk a step-back 16 footer and then a pull-up 20-footer to seal it.

To a man, the Grizzlies' starters played about as well as a unit as we've seen, with Allen and Quincy Pondexter tag-teaming to keep a quality defender on Bryant for most of the game. 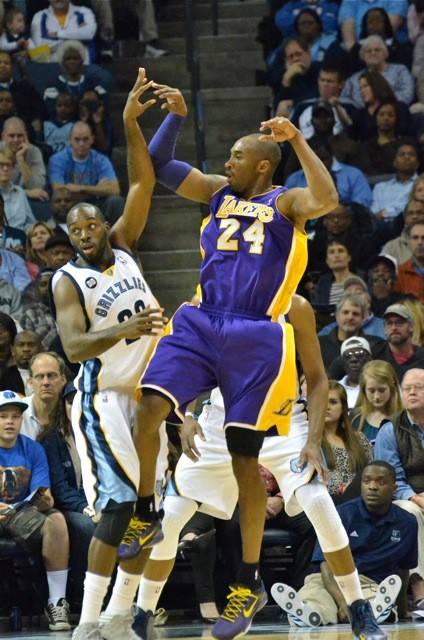 Man of the Match: You could make a case for any of the starters here. Zach Randolph extended his season-long double-double streak with 17 and 12, including his best assist of the season with a low-post, behind-the-back pass to Marc Gasol for a baseline layup. Gasol was exquisite operating out of the high post again, finishing with 14 points, 5 rebounds, and 8 assists. Rudy Gay put together an all-around game with 21-8-5. And Conley's late-game heroics polished off a 19 point, 6 assist, 4 steal effort. But I'm giving this one to Tony Allen.

Kobe Bryant may have scored 30 points, but Allen — with a crucial assist from Quincy Pondexter — made him work for it, harassing Bryant into 7-23 shooting. Meanwhile, Allen was supplementing his elite defense with tough, smart, and unusually efficient all-around play. Allen has been a bit of a disaster offensively this season, shooting under 35% coming into the game and often disrupting the team's flow in the first quarters by too often searching for or settling for shots.

Allen again launched it on his first touch tonight, connecting on a 20-footer for the games first basket. But after that he settled down, either swinging the ball or pump-faking and driving on most perimeter touches, resulting in 12 points on 5-8 shooting. Allen also grabbed three important defensive rebounds in the fourth quarter. All things considered, probably the best all-around game Allen has played this season.

Nightly Number: Even in good times, we've grown accustomed to the Grizzlies being a pretty bad passing team. Over the previous five seasons, here's where the Grizzlies have ranked among the 30 NBA teams in assist ratio, per ESPN.com:

But the Grizzlies were up to 17th heading into tonight's game and had 23 assists on 38 made baskets tonight. While Mike Conley and especially Marc Gasol have been terrific as the team's primary set-up men (14 combined tonight), traditionally low-assist forwards Rudy Gay and Zach Randolph got into the mix tonight. Gay registered his third five-assist game in 11 tries, after having only five such games in 65 contests last season. And Randolph notched back-to-back highlight assists in the second quarter, with that aforementioned bounce feed to Gasol preceded by a fastbreak alley-oop to Rudy Gay. 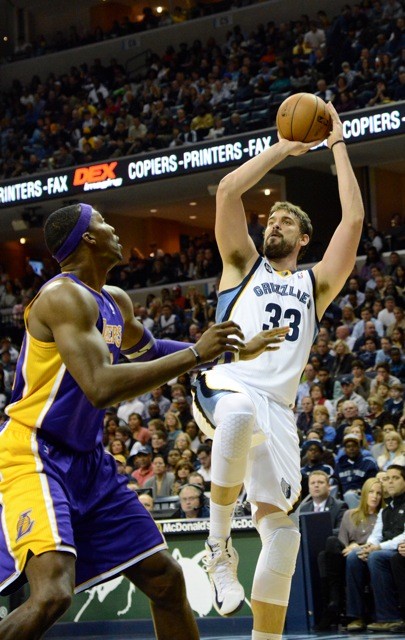 The Match-Up: With Andrew Bynum taking himself out of the conversation due to injury, tonight's game featured a head-to-head battle of what many (most?) close NBA observers would consider the league's two best centers in Dwight Howard and Marc Gasol. Here's how the stat lines played out:

Now, that stat comparison probably overstates Gasol's match-up victory a little bit. You have to see Howard in person to appreciate how devastating a defender he can be, the way he alters or discourages shots in a way that isn't captured in his shot-block and rebound numbers. You saw that especially early on, as when Mike Conley shot one lay-up attempt straight into the air to try to avoid Howard. And Howard's presence in the paint had a lot to do with the Lakers 6-13 three-point shooting in the fourth quarter, especially the way attention paid to Howard freed up bench players Antawn Jamison, Jodie Meeks, and Chris Duhon for open looks.

But, still, Gasol was terrific, on both ends. He continued his season-long brilliance passing out of the high post, notching a game-high 8 assists. He adjusted to Howard's post defense by stepping out for back-to-back 20-footers in the third quarter, and he battled Howard physically the whole game. Howard may still be better due to his overwhelming athleticism, but Gasol has asserted himself as the most skilled center in the game.

Elements of Style: Gasol's best highlight of the night? How about his incredulous reaction to being called for a palming violation in the final minutes, after which he retreated down the floor, looked at the official, and crossed his heart as if to promise that he hadn't done it.

The Jacob Riis Report: The Lakers are obviously still figuring things out. After a poor-shooting first half, Pau Gasol sat the entire fourth quarter, with new coach Mike D'Antoni electing to spread the floor with Antawn Jamison as a stretch four. Despite the loss, this decision worked out okay with Jamison having a strong game with 16 points and 7 rebounds and better-than-expected low-post defense on Zach Randolph. But Gasol wasn't alone in scoring in single digits for a second consecutive game, both losses; the same can be said of Howard. And, with Steve Nash out, Bryant went into Hero Mode in the second half to try to mount a comeback.

Before the game, when asked what he expected to be different about the Lakers since the coaching change, Lionel Hollins was dismissive of the question. “Kobe, Kobe, Kobe,” Hollins said. “I don't care who they have coaching. Kobe's going to be the featured player.”

The Lakers have a lot of questions to sort out, from getting Steve Nash back healthy, to installing Mike D'Antoni's system, to potentially making some roster moves to help in that regard, but despite the tough start, there's still championship upside on this team. 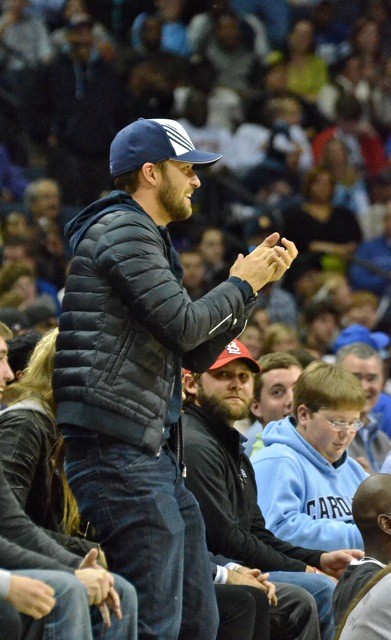 Tweet O’ the Game: The amazing thing is that down the stretch Tony Allen kept his cool while Kobe lost his. That says a lot about both teams. — @PeterEdmiston

Arena Action: New minority owner Justin Timberlake made his season debut, sitting courtside for the first half alongside new wife Jessica Biel. Timberlake, a notorious Laker fan, was wearing a Grizzlies cap, cheering the home team, and chatting it up with Mike Conley in game. He even got up to dance along with the Grizzlies Grannies and Grandpas. Timberlake and Biel moved up to one of the lower-level suites for the second half, but stuck around for the whole game.

Where They Stand: The Grizzlies improved to 9-2, the best record in the NBA at the moment and the best start in franchise history.

Looking Ahead: The Grizzlies continue their season-long five-game homestand Monday, welcoming the Cleveland Cavaliers to FedExForum.

Announced Attendance: 18,119, the second sell-out of the season.

Darrell Arthur made his first game appearance since May 15, 2011, when the Grizzlies were eliminated by Oklahoma City in the second round of that season's playoffs. Arthur's seven-and-a-half minutes weren't particularly eventful — he grabbed an offensive rebound and knocked down a mid-ranger jumper — but it's a start. “My body felt well,” Arthur said afterward. “I had about two or three weeks of practice. I was anxious to get back out there.”

The Grizzlies are now 7-0 this season when topping the 100-point mark.

Zach Randolph now has a double-double in every game this season.