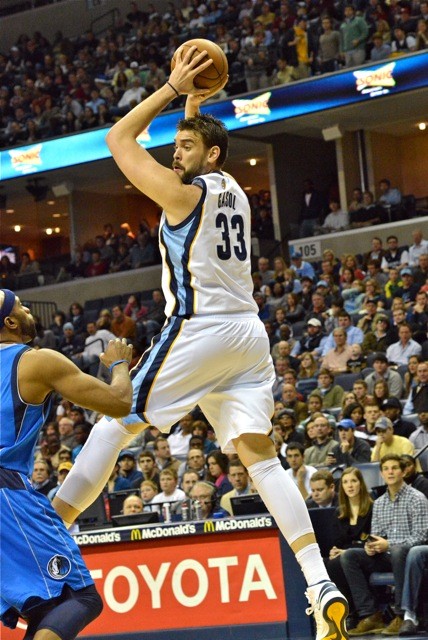 The Lead: On the night of O.J. Mayo's return to Memphis the script didn't change. The Grizzlies continued to terrorize on defense, play erratically on offense, and win.

Tony Allen cut off O.J. Mayo's water, holding the Mavs leading scorer to 10 points on 3-11 shooting (with one of those points coming in the few seconds when Mayo was on the court by Allen wasn't), and the Mavs weren't able to make up the lost scoring, especially with 6-21 three-point shooting and 24 turnovers.

Overall, in this 3-0 homestand, the Grizzlies have held opponents to 77.7 points per game.

The Mavericks never led, but they did threaten, cutting an 11-point second quarter Grizzlies lead to only one at halftime when an isolation-happy Grizzlies offense managed only two points in the final three minutes of the half. The Mavs later cut a 17-point Grizzlies lead in the late third quarter to only three with a 21-7 run.

At that point, clinging to a one-possession lead, the Grizzlies brought all five starters back and sealed the game with four of their 17 offensive rebounds and 8 of their 22 second-chance points. The first two possessions out of the timeout — a Tony Allen tap rebound of a missed Mike Conley jumper that Rudy Gay turned into a hoop-and-harm short banker and a classic Zach Randolph and-one putback off a missed Rudy Gay three — pushed the lead back to nine. Later with the lead 88-82 and under two minutes to play, Marc Gasol grabbed consecutive offensive rebounds and hit a 22-footer in one back-breaking 47-second possession.

Man of the Match: Tony Allen has been doing a number on opposing scoring guards all season, but this was a showcase performance. He was matched up with Mayo for all but about 30 seconds of Mayo's 35:21. Mayo only had one made field-goal through three quarters and finished with 10 points on 3-11 shooting. The mere 11 field-goal attempts in more than 35 minutes while the Mavericks offense was otherwise struggling is maybe the most impressive thing of all. Allen allowed Mayo no space. There were stretches on the floor where the Mavs seemed to almost give up on getting Mayo the ball.

“I treated it as a regular opponent,” Allen said after the game. “I studied him, 15 minutes worth of film on his last three games. I know he doesn't like pressure. If I saw him try to get the ball early, I pressed up full. He loves to go left, I tried to distract his left hand as much as I can. And I know he uses screens well, so I tried not to get screened. That's pretty much what my game-plan was.”

Surprising — or maybe just funny given the rich backstory too complicated to go into here — was not how well Allen played, but how much, notching a season-high 34:49 and guarding Mayo every second he was on the floor.

“That was my plan going in,” coach Lionel Hollins said after the game. “[Tony Allen] was going to guard him when O.J. was in the game. O.J.'s the catalyst for that team. He's their leading scorer. They go through him to get in the flow. They had some other people score, but it wasn't the same as when he is playing. We held them to 40% shooting and 76 field-goal attempts.”

Here's where I should say that I think this is exactly how Allen should be used; as a designated defender for elite wing scorers. Let me play big minutes in those match-ups when he's been effective. In match-ups where wing defense isn't as crucial, pull those minutes back in favor of getting more offense at the position. But Hollins hasn't been quite as focused on Allen's usage against even better scoring guards. Sure felt like he didn't want Mayo to go off during his homecoming.

“Coach don't ever talk to me about playing time,” Allen said afterward about the arrangement. “I just stay ready. It was just shocking, to be out there every time O.J. was”

“That was your season-high in minutes,” a reporter pointed out.

Allen holding Mayo under his average was no surprise, but what were the odds Allen would match Mayo in scoring (10 each) and top him in field-goal attempts (14 to 11)? 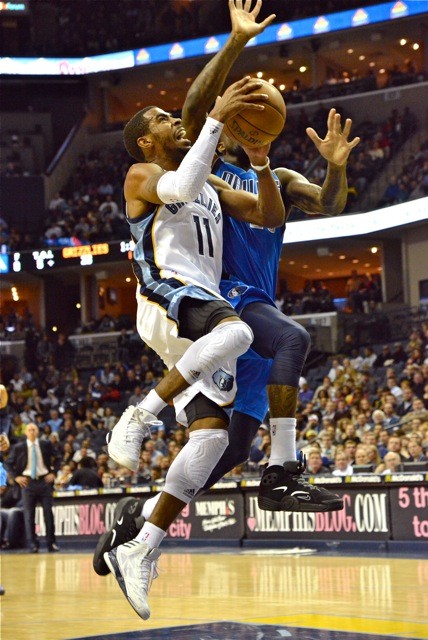 Nightly Number: The Grizzlies scored 29 points on 24 Mavs turnovers. Credit Mike Conley for much of this. Conley only shot 2-10 but played a terrific floor game, with 11 assists, 4 steals, and only one turnover.

The Match-Up: Tony Allen vs. O.J. Mayo was obviously the match-up of the game, but we've covered that. Also interesting was the Big vs. Small match-up up front. With Elton Brand out, Dallas was already playing small with Shawn Marion starting at power forward, and ended up going smaller, playing center Chris Kaman only 18 minutes.

Can't criticize the coaching move given that Mavs coach Rick Carlisle had his undermanned team competitive until very late, on the road, on the second night of a back to back. And, as I suggested in my game preview, Marion was effective, with 14 points and 11 rebounds on 6-11 shooting. Slender back-up center Brandon Wright also acquitted himself well, with 12 points on 5-6 shooting off the bench. But the Grizzlies bigs were, predictably, too much, with Zach Randolph and Marc Gasol both registering double-doubles while each shooting 50% or better.

Elements of Style: So much fun stuff in this one, so let's make a Top 5 list of memorable bits of in-game business:

5. Lionel Hollins and Dahntay Jones Sideline Collision: An out-of-control Dahntay Jones almost knocked Lionel Hollins over the scorer's table in the fourth quarter, and Hollins appeared to have some unkind words in response. Asked about it after the game, Hollins, smiling, said he told Jones, “Merry Christmas and happy holidays.”

4. Q-Pon Fastbreak Dunk: Maybe it's time to re-evaluate Quincy Pondexter's athleticism. Midway through the second quarter, Mike Conley stole the ball from Chris Kaman and dropped Pondexter a pass in transition. Pondexter took off a few feet further back than I expected and hammered home a huge dunk over two Mavs defenders. I didn't know he could jump that far.

3. Tony Allen Gives Brandon Wright Some Dap: Midway through the third quarter, Mavs center Brandon Wright is at the free-throw line and Tony Allen is standing by the scorer's table. As Wright missed the first free throw, Allen saunters by him and reaches out to slap him five, which Wright unthinkingly reciprocates. It was like a silent, free-throw version of Allen's classic “He Wit Us” bit.

2. Mosterized: Pondexter's big dunk would have been more memorable if Marreese Speights didn't top it with the probable Grizzlies Dunk of the Year in the third quarter. Speights caught a Mike Conley pass at the top of the key and rather than rise up for his usual free-throw line jumper, he rumbled down the middle of the lane for a shocking power dunk on what felt like the whole Mavs team. The disbelieving celebrations this inspired from Conley and Tony Allen were almost better than the dunk itself. Sure, Speights missed the subsequent free-throw and the Mavs immediately went on a big run, but still. (Somebody tweeting at Chris Vernon during the game came up with “Mosterized.” Reveal yourself and I'll give you credit.)

1. Darrell's Shoe D: In the first quarter, Darrell Arthur lost his shoe after an offensive possession. Typically, players will stop to put their shoe back on in this situation, but Arthur picked his up and ran back down the court — on shoe on a foot, the other in his hand — and played defense, not only helping harass Brandon Wright into a miss, but drawing a foul from Mavs rookie Jae Crowder while fighting for the loose ball.

Arthur insisted after the game that it wasn't the first time he'd played defense with a shoe in his hand, saying that it had happened a couple of times in college.

I asked Tony Allen if defending while holding a shoe was part of his lengthy defensive resume, but he said he'd never done that. “That's why I keep my shoes tight,” Allen said.

The Jacob Riis Report: The Mavs are fading, but kudos to Rick Carlisle for keeping this roster competitive without Dirk Nowitzki, who looked good shooting before the game and will presumably be back soon. I suspect Mayo's production will continue to fall but think he'll settle into being a solid second scorer in the Jason Terry mold when Nowitzki comes back. I predicted before the season Mayo would average 16 points a game for Dallas. I might bump that up a point or so, but not more.

Where They Stand: The Grizzlies improved to 18-6 and maintain third place in the Western Conference.

Looking Ahead: The Grizzlies took off after this one and will play a road game against the Rockets Saturday night.

The Grizzlies have now held opponents to less than 100 points in 23 consecutive games.

Lionel Hollins and Marc Gasol both, unprompted, mentioned the team's offensive struggles in their post-game appearances. So, even in winning, this is obviously a big concern.

“We played our game offensively,” Hollins said, with a slight rueful tinge. “We had spurts of playing really smooth and spurts of being ragged”

“We would like to play better offensively,” Gasol said when a reporter prompted him to praise the team. “Move the ball better. Screen better. Make it easier.”

Later, when another reporter asked about the team “clicking,” Gasol said, “Offensively, we're not clicking the way we want to.”

I asked Gasol about this afterward and he said, “Teams are trying to take the paint away, sending so many guys at us and forcing us to take jumpers.” Grasping for answers, he suggested, “Don't settle. Keep executing,” but also said, “I wish I knew exactly what it was. If I did, we would do it on the court.”