The Grizzlies finally found the intensity level they needed Wednesday night against the Sixers, but they found it down 88-73 and with under 8 minutes left in the game, a confluence of time and score in which effort would have to be married with near-perfect execution to complete a comeback, and near-perfect execution was not there.

Mike Conley and Zach Randolph, who had been lackluster or worse all night, led a 9-2 Griz run, scoring or assisting on every point, while the team defense found the right mix of urgency and cohesion, holding the Sixers without a field goal for more than four minutes in the middle of the quarter.

A three-point play and subsequent steal from Randolph lead to a fastbreak that would have cut the Sixers lead down to 6 with five-and-a-half-minutes to play, but Tony Allen killed the momentum with a familiar but ill-timed missed lay-up, the first of a string of miscues that sapped the Grizzlies' momentum: A forced post feed to Randolph that was picked off. Wayne Ellington missing his first three-point attempt in his 25th minute. Consecutive layup attempts (from Ellington and Randolph) blocked by Sixers center Spencer Hawes. And then a Marc Gasol pass sailing through Allen's hands.

When Sixers swingman Dorell Wright hit a three-pointer with Allen draped over him on the next trip down, the Sixers were back up by 11 with about three minutes left and hope was pretty much lost.

The Grizzlies were playing without Rudy Gay, who was on an ill-defined absence. (The official team line was “personal reasons,” with the suggestion that it was travel-related and that he would be back tomorrow.) But that was not excuse enough in what was, arguably, the worst loss of the season. The team got a dreadful offensive performance from Conley (3-17 shooting), who couldn't get anything to drop around the rim, and allowed the Sixers entirely too many easy, open jumpers, with Wright (28 points on 8-11 shooting), and Hawes (20 on 9-14) in particular, torching the Griz from the perimeter.

Considering the context — playing at home, after a three-day break, coming off a season-high 25-point loss in Houston, against a sub-.500 Eastern Conference team that would seem to lack good frontcourt defensive match-ups for Gasol/Randolph — this was probably the worst loss of the season so far.

Man of the Match: Marc Gasol was brilliant in the first quarter, wearing out Sixers center Lavoy Allen and then the rest of the Sixers defense as the Grizzlies scored 29 points on 62% shooting and Gasol scored or assisted on 10 of the team's 13 field goals. (The team shot only 32% for the rest of the game.) He wasn't as prolific or as effective the rest of the way, but Gasol's 18-8-8 line still wants Man of the Match honors in this one. 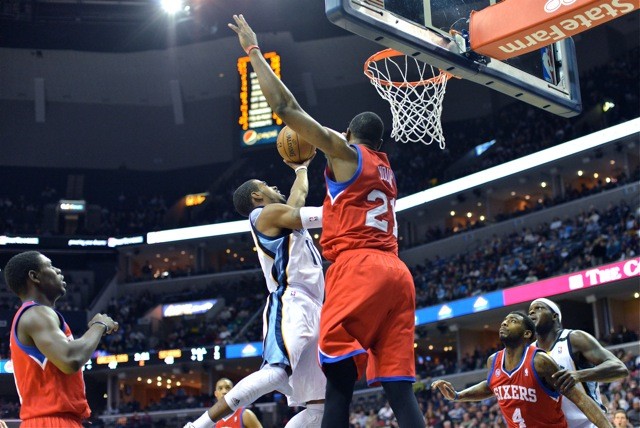 Nightly Number: Too many jump out, so I'll mention a few: The Grizzlies won the turnover battle (-4) and hit the offensive boards (+7, mitigated by missing a lot more shots), resulting in taking 19 more field goal attempts than the Sixers. And they still lost by double digits at home. The Grizzlies were also outscored 16-2 on the break, converting only one of six transition opportunities. The Sixers also had 12 blocks, with four of those coming against Zach Randolph.

The Match-Up: With Rudy Gay out, it was a match-up of three-point-shooting role players at small forward, with Dorrell Wright (5-8 from three) besting Quincy Pondexter (3-7). More significant, though, may have been the imbalance from would-be bench scorers, with the Sixers' Nick Young notching 12 points in 21 minutes while the Grizzlies' Wayne Ellington managed only 2 points in nearly 30 minutes.

The Jacob Riis Report: Not taking anything from the Sixers, who played hard and made shots, but this felt more like a bad performance from the Grizzlies. I think the Sixers might be a top three team in the East with a fully healthy Andrew Bynum, but as long a Bynum's out it's hard to see them having the horses to be much more than the .500-esque team they currently are.

Where They Stand: The Grizzlies fall to 18-8 and are clinging to the four seed — half a game up on the surprising Golden State Warriors in a now brutally tough Western Conference.

Looking Ahead: The Grizzlies have two days off and then host the Denver Nuggets — to whom they've already lost twice — at FedExForum on Saturday.