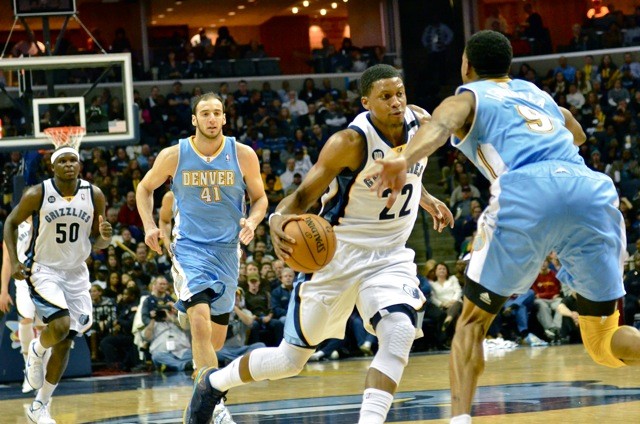 The Lead: With 12 minutes left to play, the Grizzlies seemed to be in the most precarious position they've faced all season. They were down four to a Denver Nuggets team that was both catching up with them in the playoff standings and on the verge of securing a tiebreaker by winning the regular-season series between the two teams.

They'd just suffered a potentially deflating and — more importantly — potentially serious injury to a key player, when Quincy Pondexter knocked knees with Wayne Ellington near the end of the third quarter and Pondexter had to be carried to the locker room.

And the poor offense that had sent the team tumbling from the ranks of legit contenders seemed to be getting worse still, with only 53 points on 34.8% shooting through three quarters.

Searching for something, Lionel Hollins sent out five players who had never seen the floor together before: Jerryd Bayless, Wayne Ellington, Darrell Arthur, Marreese Speights, and Hamed Haddadi.

“It was about trying to get some energy,” Hollins explained later. And it worked.

This unlikely lineup gave the team a big boost, going on a 15-9 run over the next 6:45 and transforming the energy in the building from low to near-playoff-level. (Big Hamed Haddadi dunks have a history of doing that.)

“We were able to energize the crowd and energize ourselves, because we were just playing in mud,” Hollins said. “We were just moping around.”

It started instantly with a 40-second sequence that tied the game: A Shane Battier Memorial Baseline Jumper from Speights. Arthur, playing the three, stealing the ball from Corey Brewer. And then Bayless finishing in transition with a dunk. After that, Bayless and Speights connected on a baseline alley-oop. Haddadi flushed one over Kenneth Faried. Arthur took advantage of his mismatch by posting Brewer and hitting a short baseline jumper. Ellington spotted up for a three.

It was a reminder that, as poor as the Grizzlies offensive execution has been of late, nearly as troubling has been absence of what has been the team's trademark intensity. Offensive execution remains a big concern, but better and more consistent energy would alleviate at least some of it.

With the energy raised, a closing unit featuring three well-rested starters (Rudy Gay, Mike Conley, and Zach Randolph) with two holdovers (Jerryd Bayless and Wayne Ellington) peeled off a 10-0 run to put the game away. 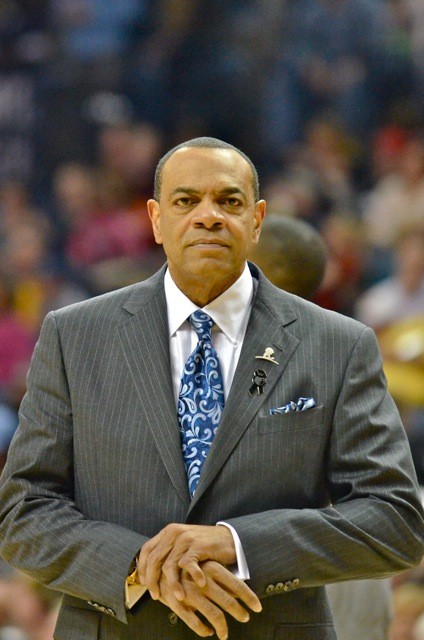 “We needed a win like a man needs air when he's underwater,” Lionel Hollins said afterward.

The badly needed victory comes with a bitter aftertaste, though, given Pondexter's injury. The team reported it during the game as a “sprained MCL,” which doesn't sound that bad, but that's a tentative diagnosis. We won't know for sure how serious the injury is until Pondexter has an MRI tomorrow.

UPDATE: Pondexter tweeted this Sunday morning: "Thanks for all the prayers. MRI went well, just a MCL sprain. Hope to be back on the court in a few weeks #GrizzNation. God bless"

I don't think that quite counts as official word — players often embrace the most optimistic end of a projected injury timetable — but it suggests that Pondexter may be able to return this season.

Man of the Match: Leading the way in that definitive 10-0 run was Rudy Gay, who took over the game after re-entering midway through the fourth quarter.

Gay scored eight of the 10 points in a 2:21 stretch, bracketed by isolation scores — the first a drive, the last a pull-up — on Danilo Gallinari. In-between, Gay scored an assisted layup off a Zach Randolph feed, stole the ball from from Andre Miller and overpowered Corey Brewer for a bucket, and helped force another Nuggets turnover.

Gay finished with a game-high 19 points to go with 6 rebounds.

Nightly Number: In a night where the Grizzlies offense struggled mightily for three quarters, the Grizzlies were able to convert enough defense into offense to stay alive, scoring 30 of their overall 81 points off 17 Nuggets turnovers.

The Match-Up: A night after scoring a season-high 39 points, Danilo Gallinari only scored 7 points on 2-8 shooting against the Grizzlies. A lot of credit goes to Tony Allen, who was back in stopper mode, keeping Gallinari from even getting a field-goal attempt up in six first-quarter minutes, then guarding both Andre Iguodala and Andre Miller when Gallinari went out.

Also spending time on Gallinari tonight was Darrell Arthur, who bolstered his credentials as an ace defender against stretch fours before adding a new line by moving the small forward in the third quarter and doing good work on Cory Brewer.

You don't necessarily want Arthur guarding ball-dominant slashers, but against most small forwards he looks like he can hold his own defensively. Assuming Pondexter misses at least some time, using Arthur at the three looks like a spot-minute option depending on the match-ups.

Even more likely, of course, is going smaller. And one of the things that made the fourth quarter so odd is that the Grizzlies transitioned from their biggest lineup of the season (Arthur-Speights-Haddadi frontline) to one of their smallest (Conley-Bayless-Ellington perimeter). 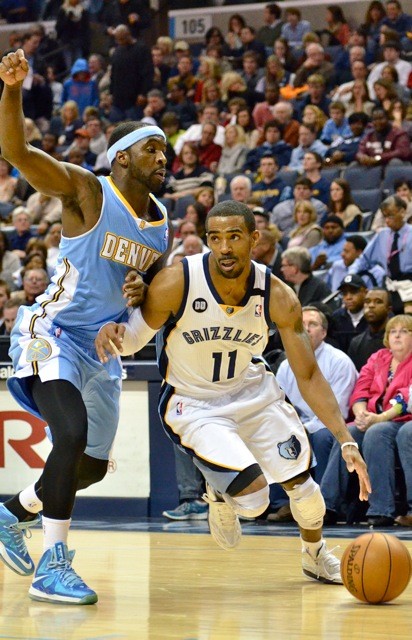 Elements of Style: Nuggets center JaVale McGee is someone you always want to keep an eye on. At least twice tonight, he started running toward the Grizzlies bench at a timeout before catching himself and re-routing back to his teammates. He also had six blocks, including two massive, memorable ones. The first was a transition block on a Rudy Gay dunk attempt. The next was a swooping rejection of what looked to be a wide-open Mike Conley lay-up. Many Grizzlies fans seemed appreciative of the Nuggets playing McGee fewer than three minutes in the fourth quarter. As it is, McGee had 12 points, 9 rebounds, and 6 blocks in only 22 minutes.

Tweet O’ the Game: Is this Game 7 vs the Clippers? RT @FlyerGrizBlog: Griz starting fourth with this: Bayless-Ellington-Arthur-Speights-Haddadi — @bharris901

Where They Stand: The Grizzlies improved to 19-8 and maintain a slim lead over the Golden State Warriors for fourth in the Western Conference.

Looking Ahead: The Grizzlies hit the road for five of their next six games, starting with an afternoon game Monday at Indiana.

Announced Attendance: 17,707, just a few hundred shy of what would have been a surprising sellout.

If Pondexter is out for an extended period of time, you have to think the Grizzlies might look to a D League call-up or some other kind of short-term signing. The Grizzlies are carrying the minimum 13 players, with three of those (Hamed Haddadi, Josh Selby, and Tony Wroten Jr.) not really playing, and Pondexter is the only small forward on the roster behind Rudy Gay.

I tweeted during the game that Mike Conley looked tired and was later informed by a Grizzlies employee that he'd been sick earlier in the day and had to take an IV. Conley confirmed this after the game, saying he suspected food poisoning and that his status had been in doubt this morning. Though his jumper was short and he lacked his usual burst, Conley and back-up Jerryd Bayless (who played well) combined for 11 assists and only one turnover.