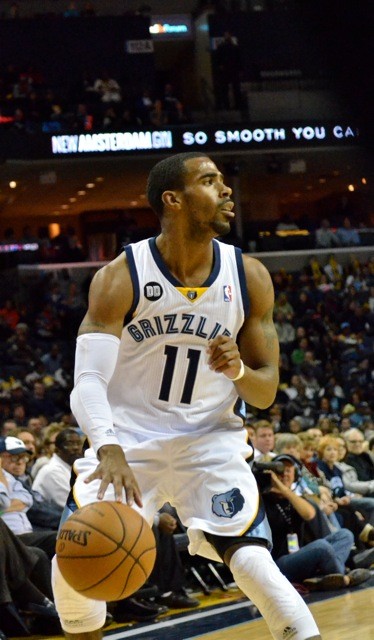 If ever there was a game that backed up my now oft-stated assertion that as Mike Conley goes, so go the Griz, it was last night in Boston, where the Grizzlies got a double-digit road win despite Zach Randolph and Marc Gasol combining for 11 points on 4-15 shooting.

But Conley combined a season-high 23 points (on 8-15 shooting) with nine assists and only one turnover, all while playing 44 minutes due to a first-quarter Jerryd Bayless ankle sprain. The team also got good games from Rudy Gay (19-6-5, though Paul Pierce lit him up early on), Tony Allen (15-5, on 6-8 shooting), and reserve bigs Marreese Speights and Darrell Arthur (a combined 20-9 on 8-13 shooting).

Mitigating the good vibes: The Celtics are really struggling right now. They'ed gone 2-7 in their previous nine games, with six of those seven losses in double figures. And, offensively, though the Grizzlies' performance looks good at a glance, there were again problems down the stretch. After scoring 25 points in each of the first three quarters, the Grizzlies managed only 18 in the fourth, with much of that padded by late free-throws. The Grizzlies had more shot-clock violations (2) than made field goals (1) in the game's final nine minutes. They seemed to be playing tight and too conservatively; running down the clock and getting tough, contested, often forced shots as a result.

A couple of lineup wrinkles: For the third game in a row, following Quincy Pondexter's injury, the team used Darrell Arthur at small forward and were able to extend a lead with that lineup. Arthur contributed in an unlikely fashion, hitting 2-3 from three-point range after going 0-13 to that point in his career. (Though I wonder how many of those 13 have been desperation heaves at the end of a shot clock or game clock.) I have a lot more to say on this subject, but will save it for tomorrow's game preview.

Tony Wroten also got into the game after Bayless' injury — for a few seconds in the first half and then for a couple of minutes in the second. It's too little time to make much of a judgement. Wroten committed a turnover and also notched a basic assist swinging the ball to Speights for an open mid-range jumper. It was not an easy assignment for the rookie, on the road in Boston, with Rajon Rondo pressuring him. If Bayless misses time, I'd love to see Wroten get more of a chance to contribute in the next few games.

Overall, the win improved the Grizzlies to 20-9, becoming the eighth team in the league to notch 20 wins and one of five that still hasn't hit double-digit losses. The Grizzlies cling to a slim lead over the Golden State Warriors for fourth in the West.