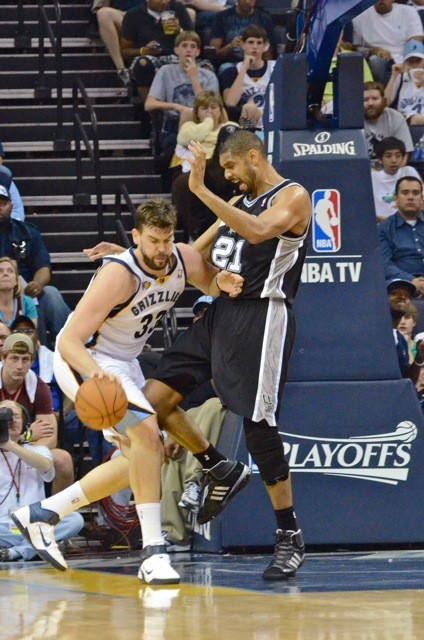 The Grizzlies return home for a big game tonight. They're 2.5 games back of the San Antonio Spurs in the Southwest division and after getting off to strong 4-1 start in January, will face a tougher test against the Spurs.

1. Is Tim Duncan Wearing Down?: Duncan went large — 27-15-4 —in the previous meeting this season between the Griz and Spurs, a 99-95 overtime loss in San Antonio on December 1st. But after a brilliant start to the season, Duncan has been trending down a little. His month-by-month production:

Maybe the 36-year-old future Hall of Famer is wearing down. Maybe he's conserving himself for the post-season. Maybe November was a bit of a fluke. Maybe it's just random. Regardless, the Grizzlies will hope the trend continues tonight.

2. Kawhi Leonard is Back: One difference tonight will be the return of Spurs small forward Leonard, who was not available in the previous meeting. As a rookie, the sturdy, athletic Leonard proved to be a tough defensive match-up for Rudy Gay, who averaged 14 points on 33% shooting against the Spurs last season. Gay was strong in the first game, but may face a stiffer challenge tonight.

3. The Conley-Bayless Backcourt: The Grizzlies' moribund December offense has improved in January. One reason for that seems to be the success the team's had using Mike Conley and Jerryd Bayless together in the backcourt, often in the fourth quarters, often with Bayless in place of shaky-shooting Tony Allen.

Head coach Lionel Hollins experimented with this look quite a bit in the preseason and seemed to like its potential for more ball-handling and playmaking and to free up Mike Conley for more catch-and-shoot looks. But the returns on the defensive end weren't good when the regular season began and Hollins went away from it quickly.

Perhaps searching for something to energize the offense, he's started deploying it again — 38 of the 96 minutes Conley and Bayless have been on the floor together have been in the past five games — with much better results. As with his astute use of Darrell Arthur at small forward — spotting him in situations where he can be successful and keeping him away from difficult match-ups — credit Hollins here for adeptly picking his spots with this backcourt.

Presumably, we'll see it more tonight with the Spurs pairing small guards Tony Parker and Gary Neal in three of their six most used lineups.