The Grizzlies look to get back on track tonight against the 15-24 Sacramento Kings. But tonight's game isn't about match-ups or stylistic contrasts, it's about the Grizzlies fixing themselves.

And the issue of the day isn't on the court anyway, it's all the off-court intrigue currently festering around the team. So, today, let's make that the subject of the usual three points: 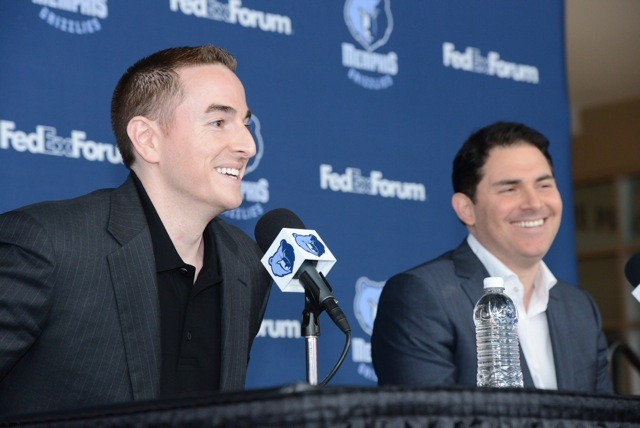 1. The Pera Meeting: The Commercial Appeal reported yesterday that majority owner Robert Pera met with Mike Conley and Marc Gasol while the team was in Oakland to face the Golden State Warriors earlier this month, with the heavy implication that this meeting has been internally disruptive.

I'd say the details are very much unclear. Who instigated the meeting? (It was initially characterized as an invitation from Pera but was later softened to something more neutral. I've heard it two different ways: One that Pera asked for the meeting, and another that Conley and Gasol asked for it.) What was talked about? (I heard, unsurprisingly, that Gasol and Conley made a case for keeping the current core together for the remainder of the season.) To what degree was it actually disruptive?

There's certainly a chance that this meeting may have been unwise, counterproductive, or poorly staged, but even if it was at Pera's invitation — which, again, is very much unclear — I think some of the initial reaction to it was curious. I see nothing “weird” or perplexing about it. In fact, the potential rationale would seem pretty obvious.

This Grizzlies are facing very serious organizational decisions in the near future. It's a near certainty that Conley and Gasol will be here next season, and, for various reasons, they're probably the only core figures you can say that about. It's not surprising that new ownership might want to take their pulse as part of their decision-making process.

2. Please Talk (To Us): There's been a lot of complaint from our daily paper in the past few days about the lack of public comment from the new Grizzlies ownership and management. And while I agree that this relative PR void has been an issue, it's not hard to sense more than a whiff of concern-trolling here. Has the real issue been that Robert Pera and Jason Levien haven't been talking or whom they haven't been talking to (or through)?

Levien did a segment on The Chris Vernon Show — full disclosure, a show I'm a regular guest on — yesterday, which probably wasn't what the complainants had in mind when they demanded a public airing. And, on the show, Levien said … not much of anything.

What did people expect?

What's he supposed to say about the prospect of a Rudy Gay trade? If the team does eventually trade Gay, they obviously can't discuss it until it happens. And even if they don't expect to trade Gay, they're not going to publicly shut the door until the trade deadline passes.

As for Lionel Hollins' status, for whatever reasons — maybe good ones, maybe not — the new regime clearly hasn't made a decision to bring him back. And, as far as anyone can tell, they haven't ruled it out either. Would it be easier for everyone if there were more clarity on the subject? Probably so, but public comment follows internal decision, and that decision apparently hasn't been made.

3. An Unfortunate By-Product of Timing: I think the jury is very much still out on the team's new regime, but I also think they should be evaluated on what they actually do — which, so far, isn't much — rather than how well they court the media.

And the biggest problem right now is related to when the deal between the Pera group and Michael Heisley was completed. A lot of the distraction and disruption of the moment is an unfortunate by-product of timing. Changes were always going to happen and evaluations were always going to be made after an ownership change. Rudy Gay trade rumors were almost certainly going to happen regardless — they'd been prevalent even before the change.

If Pera and Levien had taken control of the team in May or June instead of in November and all of this were taking place during the off-season, not nearly as much would be made of it.

As to the unfavorable comparisons between Heisley and Pera/Levien, I've seen this coming for awhile and have written about it on a few occasions, but confusion and misinformation lingers, so let's try this again.

The fiscal cliff the Grizzlies are heading toward didn't suddenly emerge when the franchise changed ownership. The problem comes from a combination of having three max-type long-term contracts and the more punitive luxury taxes in the new collective bargaining agreement, and it's been sitting on the calendar — summer of 2013 — ever since the new CBA was ratified.

Heisley knew this and was prepared to act on it, sooner or later. How do we know? He told us.

Last May, right after the Grizzlies' series loss to the Los Angeles Clippers, Heisley acknowledged this, telling the Commercial Appeal, "We can't be in the luxury tax business. We've got to make some financial decisions. That's without question.”

The franchise subsequently had some substantive trade discussions about Gay, including, according to one source, with the Golden State Warriors near the draft, and, according to another source, some much more minor conversations with other teams regarding Randolph. None of that should be at all surprising to anyone.

Instead, the team ended up keeping both and crossing the luxury tax line to start this season. (Tax, it should be noted, is calculated based on the roster you end the season with.) Maybe they didn't like the deals that were out there. Maybe, knowing an ownership change was coming, Heisley wasn't concerned about a down-the-road tax decision he wasn't likely to have to make. Maybe he just, reasonably, didn't want to make a major shake-up on a roster someone else was soon to acquire. Maybe — as I urged then and still feel now — he felt that if ever there were a season to go into tax territory it's this one, with a potential contending roster and with elevated tax rates still a year away.

Regardless, those financial decisions Heisley warned everyone about were still looming. And circumstances were going to necessitate a move, either before the end of the 2012-2013 season or before the beginning of the 2013-2014 season. This remains true today, for a new ownership and management group that, like the one before it, is exploring ways to avoid the cliff but hasn't actually taken the inevitable action.