Rudy Gay to Toronto? — Five Deals That Might Make Sense 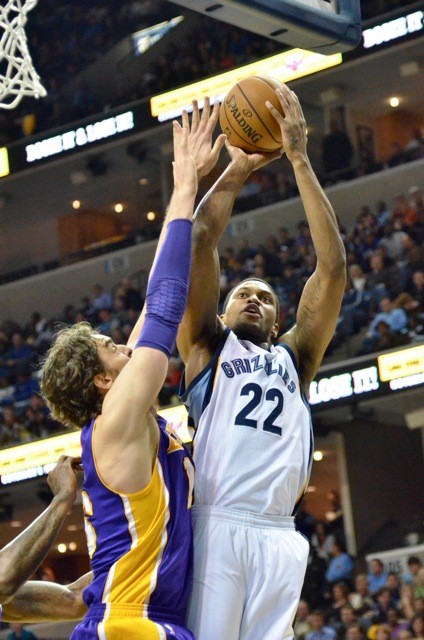 The Rudy Gay trade scuttle quieted down for a few days after last week's deal between the Grizzlies and the Cleveland Cavaliers lessened the financial imperative for the Grizzlies to make a move this season. But that trade did nothing to remove the long-range need for the Grizzlies to correct their salary trajectory, and that, in concert with the Grizzlies' shooting limitations, meant an in-season Gay trade had to still be an option.

Monday night, just as the Grizzlies were mounting a comeback in Philadelphia, the Rudy Gay Trade Machine got revving again, with a Marc Stein report that Toronto, long-rumored to have interest in Gay, was in “active trade discussions” with the Grizzlies. And that report got some back-up via Yahoo's Adrian Wojnarowski, who reported Tuesday night that the Grizzlies are “determined” to move Gay “as soon as possible” and are looking for a third team to involve.

I wrote this about the Raptors as a potential trade partner in my Rudy Gay Trade Opus:

Toronto Raptors: Toronto has shown an interest in Gay in the past, but there's no good deal to be made here. Any one-on-one deal — like this — would have to include the $10.5 million expiring contract of Jose Calderon, and that's too much for the Grizzlies to invest in a back-up point guard in a season when they're still trying to make some post-season noise. A better bet would probably be a multi-team trade with Calderon or even Andrea Bargnani going somewhere else, but I haven't come up with any good scenarios along those lines.

In truth, I was too fatigued at the time to try to dream up multi-team scenarios involving Toronto, but now that there are actual reports that such ideas are being discussed, it seems more purposeful.

(One note on the Trade Machine madness to come: Made-up trades are fun, but the point here is more to think about the conceptual framework of viable deals. In most of these cases, you can come up with variations on the theme.)

As far as the notion of Toronto as a solo trade partner, there's a deal to be made if the Grizzlies just really wanted to deal Gay this season and didn't have better options. It would involve Calderon's expiring contract, which would secure the Grizzlies the financial flexibility for next season that they have to have.

And it would involve one or two of three future assets: Rookie swingman Terrence Ross or emerging big Ed Davis or a future pick. (Toronto could owe their 2013 first-rounder to Oklahoma City, which, unless I'm missing something, means they couldn't trade a first-rounder until 2015.) The Wojnarowski piece implies the Grizzlies would get two of the three, “a young Raptor player” (presumably Davis) and a future pick, but that Ross has been “deemed untouchable.” That could be a hard line, or it could be posturing. It doesn't seem to make a whole lot of sense for the Raptors to have signed DeMar DeRozan to a big extension and pursue Rudy Gay and not be willing to deal Ross. Then again, I'm not sure how it makes sense to want to pair DeRozan and Gay to begin with, and they apparently want to do that.

The big question with the Raptors, it seems to me, whether we're talking about a direct trade or a three-or-more-team scenario, is whether Toronto is willing to give up two of those three assets, along with Calderon's contract, to acquire Gay. I'm guessing the answer to that could determine whether there's a deal with Toronto good enough to warrant moving Gay now instead of waiting until this summer.

Calderon and two of those three assets would make a pretty good package going forward. The problem for the Grizzlies is that they're trying to thread a needle of fixing their long-term salary structure while maintaining some semblance of contention this season. As to the latter, downgrading from Gay to Ross on the wing is pretty steep, and with Jerryd Bayless breaking out of his slump and Tony Wroten developing, backup point isn't enough of a need to warrant having Calderon in a $10 million salary slot to be Mike Conley's backup, despite the fact that Calderon's adept passing and excellent three-point shooting would certainly be helpful. As for Davis, if he's a fourth big, that only adds so much value. And to the notion of Darrell Arthur going out with Gay in a deal, there's a legitimate debate to be had as to whether Davis is really an upgrade over Arthur as a third big.

Instead, a deal with Toronto that would accomplish both short- and long-term goals for the Grizzlies would almost have to include a third (or fourth?) team. And, with Andrea Bargnani's value being very sketchy, it would almost certainly include either Calderon or Kyle Lowry as a core asset going out.

With that in mind, let's speculate on potential three-team trade partners in two different kinds of deals:

The list of current playoff contenders who actually need point guard help is pretty slim, with one obvious candidate and one likely candidate:

Boston: After losing Rajon Rondo to a season-ending injury, the Celtics could definitely be in the market for point guard help and have lots of wing assets to deal, most notably Courtney Lee, who has been a Grizzlies target on multiple prior occasions, including as recently as this summer, all of this even before two of his former agents (Jason Levien and Stu Lash) ended up in the team's front office. There's also Jeff Green, who is a better positional fit. But both players have contracts a little — or, in Green's case, more than a little — out of line with their production. (I do think Lee's a better player than he's shown in Boston this season.)

Boston would seem likely to be more interested in Lowry than Calderon, but the difference in Gay's salary ($16.5) and Lowry's ($5.8) is so large that it's difficult to envision a deal that wouldn't require the Grizzlies to take back a bad contract such as Green, Landry Fields, or Amir Johnson (which maybe isn't really that bad).

Something like this, with the Grizzlies getting Lee and Johnson along with — and this would be a necessity — a pick from one or both of the other teams could work. It would leave the Grizzlies undersized at small forward, but it would also clear enough space now for the Grizzlies use their Marreese Speights trade exception to potentially add another player without going back into the tax.

For the Celtics to take Calderon probably means the Grizzlies taking Green, and would require more sweetener for the Grizzlies. Something like this, with a pick from somebody if possible.

Utah: The Jazz could also use some point guard help in their playoff push, though they're a hard team to get a read on. Any deal, for Calderon or Lowry, would likely involve the Grizzlies taking back Marvin Williams. His value relative to his contract might even be more imbalanced than Gay's, requiring additional good assets. I see Utah deals as a longshot, but so few playoff contenders really need point guard help that they have to be considered.

These kinds of deals — using Calderon primarily as an expiring contract — are a little trickier. Here you'd be talking about teams that value Calderon as a mechanism to shed salary — except the Grizzlies want to shed salary too. The key question here is for the Grizzlies. Are they willing to take back a mid-level “bad” contract in order to accomplish two goals?: Obtaining payroll flexibility under the tax threshold for next season and adding a desired asset or two.

If so, I see three teams that it could make sense to deal with, all teams pretty much out of the playoff race that could — should — be looking at a major rebuild.

Orlando: The Magic have an expiring asset — shooter J.J. Redick — that would be great for the Grizzlies. They also have eight first-round picks in the next five years. Would they be willing to package one of those picks with Redick in order to add a proven young asset (Davis or Ross?) and shed some salary (Al Harrington or Hedo Turkoglu?). Would the Grizzlies be willing to add a mid-level salary like Harrington (two additional years) or Turkoglu (who has a buy-out this summer) for the next season or two in order to get Redick and add back a pick? I think the answer should be yes for both. If it is, you could do something like this.

Phoenix: A similar question here, with the Suns also owning eight first-rounders over the next five seasons and also having a player — Jared Dudley — that would be a great fit for the Grizzlies. Something like this, with a future Suns pick coming to Memphis, might make some sense.

Dallas: The Mavs don't have the wing shooter the Grizzlies would prefer, but Shawn Marion has held his value pretty well and would make a viable short-term Gay replacement while becoming a potentially useful trade chip as an expiring contract starting this summer. Would clearing Marion's $8 million for next season be valuable enough for Dallas to chip in a first-round pick? Something like this. Vince Carter could also easily factor into this scenario, with Ross out and Davis in.