The Lead: The lead story of this game is not the game itself, it's the news that came prior to tip, that Marc Gasol would not play. This news was followed by a one-liner press release from the team:

The Memphis Grizzlies today announced that center Marc Gasol re-aggravated an abdominal tear on March 22 at New Orleans and will be out indefinitely.

That may sound bad, and it's certainly not optimal, but I'd caution against freakouts. As the release implies, Gasol's been playing hurt the last couple of weeks, and still playing well. There had already been signs and adjustments. Gasol was not jumping the tip in recent games to save wear and tear. And he would wince some after physical plays (such as the two charges he took against the Thunder). I wondered if the Randolph-heavy offensive game plan against the Thunder was related to that the injury.

As for sitting him now, my sense is there's a cause/benefit aspect: How important is the remaining playoff positioning and how do you weigh that against the value of rest and treatment for an injury that won't be going away before playoff time?

Both before and after the game, coach Lionel Hollins suggested it was a day-to-day thing. Others I talked with suggested Gasol would likely miss multiple games. But no one seems to think this endangers his availability for the postseason.

With Gasol out and Zach Randolph coming off the bench after being late to shootaround, the Grizzlies started Ed Davis and Darrell Arthur up front. The Celtics were also shifting lineups, with Kevin Garnett and Courtney Lee both out with ankle sprains.

The result was an out-of-character contest for this particular match-up. On the season, both Memphis and Boston are elite defensive teams (second and fifth, respectively) who play at a slow pace (28th and 19th) and are mediocre offensively (20th and 22nd). 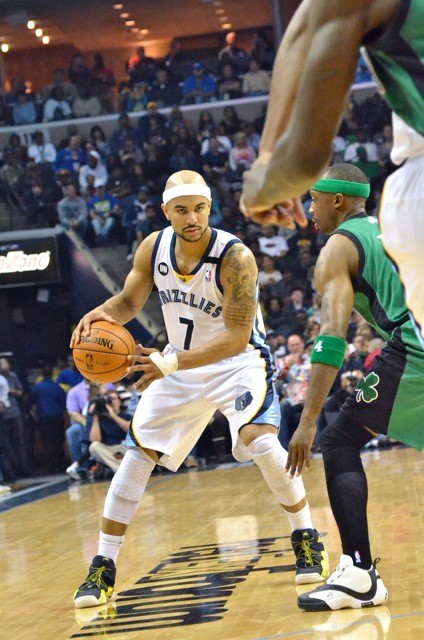 But with defensive anchors Gasol and Garnett out, the game had a “Dad's not home, let's jump on the bed” feel to it, at least for a while. It was a fast-paced, high-scoring, oddly casual-feeling game full of memorable and/or odd bits of action. Unlike earlier in the week against Oklahoma City, this didn't have a “playoff atmosphere.” It had a “relaxed, fun, regular-season game atmosphere.”

And, so, we got a classic Paul Pierce-Jerryd Bayless shootout. We got Zach Randolph grabbing a defensive rebound and taking it coast-to-coast. We got a Tayshaun Prince transition block flashback followed by an Olajuwon-esque post move. We got Tony Allen doing Tony Allen stuff. (This celebration was choice, but I liked when he wandered off the bench after a charge call went against the Grizzlies and reached down to touch the floor to demonstrate where he claimed the Celtics defender had been.) We got Doc Rivers riding a young referee ruthlessly. We got Bayless getting clothesline tackled at center court by Pierce and then losing his mind for a minute a little later, shoving Jordan Crawford under the basket for a tech. We got Jordan Crawford. Good times all-around.

But then it tightened up. It's all fun and games until the Celtics reserves — guys like Shavlik Randolph and Terrence Williams and one of my very favorite journeymen, D.J. White — make an unlikely run and Marc Gasol is sitting on the bench in a suit.

The Grizzlies played smaller and faster without Gasol, and, against the Garnett-less Celtics, it worked out offensively. But they sure missed Gasol's defensive presence when the Celtics scored 33 points on 56% shooting in the fourth quarter. The Grizzlies lead by 21 with seven minutes left to play. The Celtics then went on a 23-6 run to make it only a four-point game with under a minute to play.

In a game that lasted more than two-and-a-half hours without an overtime, it was like a great concert with one encore too many. But the Grizzlies made all their free-throws down the stretch to hold the Celtics off, which at least kept the final encore from being a sad trombone solo.

Man of the Match: After hitting the overtime-forcing three against the Thunder, Jerryd Bayless returned to FedExForum to come off the bench for a season-high 30 points. He was shot-searching like a rich man's Jordan Crawford early on en route to a 20-point first half. Among his pull-up and spot-up bomb-throwing, he also peppered in another of his increasingly standard halfcourt oop dunks.

Honorable mention goes to Darrell Arthur in his second game back from injury. Arthur said after the game that he's still far from 100 percent, with back and knee issues. But this was the best game he's had in a while — remember, he was slumping even before his latest injury issue — scoring 18 points on 8-14 shooting, with 7 rebounds. Arthur's mid-range jumper was in fine form and his power dunk in transition was the play of the night. He also did a pretty good Marc Gasol impression with a clutch running hook late in the fourth.

Nightly Number: Classic possession basketball for the Grizzlies, who got 20 more field goal attempts than the Celtics, a result of hitting the offensive boards (16) and taking care of the ball (only 8 team turnovers).

The Match-Up: Am I allowed to say Ed Davis vs. Shavlik Randolph? A veteran journeyman from dread Duke, Randolph seems like he should be past his NBA expiration date, but he was a big factor in the Celtics late comeback. In a three-and-a-half minute stretch after Randolph entered the game and before Davis exited, Randolph scored a basket, drew a foul on Davis, blocked one of Davis' shots, and grabbed three rebounds as the Celtics knocked five points off the Grizzlies lead.

Davis had a decent game overall — 11 points, 8 rebounds, 5 blocks, one of which was on Randolph in the same sequence — but his struggles around the rim against Randolph and D.J. White in the fourth was disappointing. 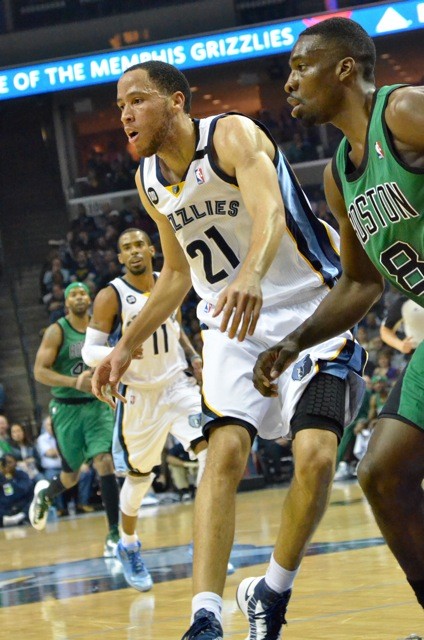 Arena Action: Let this be a lesson to young people everywhere: Sometimes when you bang the bongo hard enough, people in positions of power will hear you and respond.

A few weeks ago, I expressed appreciation for “the Bongo Lady” — a fan who brought a special kind of joie de vivre to the new “bongo cam” bit during games. I suggested a bongo-off between “the Bongo Lady” and Tony Allen. Well, we didn't get quite that, but, perhaps just as good, we got Allen appearing on the big screen, mid-cam, to give voice to us all, asking, “Where's the Bongo Lady?” And there she was! Bongo-ing her heart out. Salute to the game operations staff for making dreams come true.

Lots of Celtics green in the house tonight, but more creative was a gentleman at center court in a Mauldin #21 jersey. Mauldin, South Carolina, is Kevin Garnett's home town. Garnett moved to Chicago for his senior year, so this guy was taking it back to junior year of high school for his Garnett appreciation. Maybe he's a member of the Official Block Family.

Making an appearance between the first and second quarter: The mechanical horse thingy that's featured in the Broadway musical War Horse. This was a promotion for The Orpheum, which is bringing the play in for its 2013-2014 season. I mention it because I'd never seen it before and it was pretty cool. Also, I'm a rare fan of the Steven Spielberg film version.

Where They Stand: The Grizzlies improved to 47-22 and are a half game behind the Clippers and a game behind the Nuggets in the dogfight for the 3-4-5 seeds in the West. Truthfully, even before Friday night's bad loss in New Orleans, the third seed was looking like a tough get. The Nuggets are playing too well and their remaining schedule is too comparatively easy. And if Denver keeps #3, that pretty much locks the Grizzlies into #5 because the Clippers will be a division winner. But, in that scenario, homecourt advantage in a potential series with the Clippers could still be in play. If it remains tight, the April 13th game at FedExForum between those two teams could be huge.

Looking Ahead: But, before then, the Grizzlies will hit the road for a quick Eastern trip, facing the Wizards on Monday and the Knicks on Wednesday.

Zach Randolph was in a good mood after the game. It was a double-win day for him, with the Grizzlies beating the Celtics and his Michigan State Spartans beating the Tigers in the NCAA tournament.

The Grizzlies started the second half with Tayshaun Prince and Zach Randolph up front together. Even with, arguably, better frontcourt than wing depth, I'm guessing Prince could see a decent bit of time as a small-ball four if match-ups are favorable and Jerryd Bayless is shooting well.