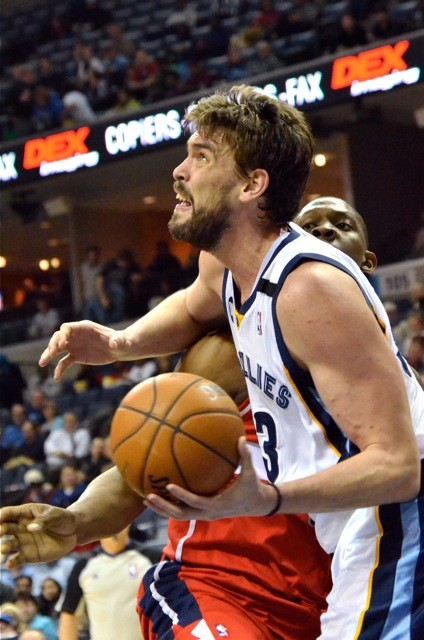 Marc Gasol's Defensive Player of the Year campaign continued last night with another strong demonstration of his all-around value on that end of the floor.

With Gasol as its hub, the Grizzlies have had the second-best defense in the NBA this season. But, on Saturday night against the Celtics, with Gasol sitting out his first game with an aggravated abdominal tear, the Grizzlies gave up 106 points on 51% shooting to the Boston Celtics, a team with a 22nd-ranked offense playing without three rotation players (Rajon Rondo, Kevin Garnett, and Courtney Lee).

But the other two did enough. John Wall went supernova, scoring 47 points on 13-22 shooting (including 19-24 from the line) in probably the most dynamic performance from an opposing player this season. He scored on Mike Conley, on Tony Allen, on Jerryd Bayless. But, as good as Wall was, the X-factor for the Wizards may have been center Emeka Okafor, who scored 21 points on 9-15 shooting in Gasol's absence. Twice in the final two minutes the Grizzlies cut the Wizards lead to four and both times it was Okafor who answered, first by overpowering Ed Davis on the left block to draw a foul and then by hitting an open free-throw line jumper.

It was a listless loss, the team's fourth in a row on the road, and it kept the Grizzlies from capitalizing on a rare loss by the Denver Nuggets, whose winning streak was snapped in New Orleans. (The Nuggets were also playing without their best player, Ty Lawson.)

It leaves the Grizzlies a game behind both the Nuggets and the Los Angeles Clippers with 12 games to go. That's a tight race, but the confluence of having the toughest remaining schedule of the three and being without their best player for what I'm assuming will be at least a couple of weeks has the team trending strongly toward that fifth seed.

If there's a choice between fighting for seeding and maximizing Gasol's health for the post-season, however, then I think sitting Gasol is the right — if perhaps unavoidable — decision.

There were other trends or counter-trends from last night's game worth exploring — Zach Randolph's limitations, Mike Conley's increasing confidence, Jerryd Bayless' high-volume shot-taking, Quincy Pondexter's three-point shooting, Tayshaun Prince's versatility, and the mystery of what to expect and how to use Darrell Arthur and Ed Davis come playoff time. But I'll have to table that for now. I'll try to get into some of those issues before tomorrow night's game in New York.