Take Five: Linked Observations the State of the Griz

Five quick-ish and related observations on where the Grizzlies stand today:

1. The Race for #3: With the Dallas Mavericks beating the Los Angeles Clippers in overtime last night, the race for the third seed remains very tight with the Grizzlies, Clippers, and Nuggets all tied in the loss column at 23. Here's how the schedules for all three teams set up the rest of the way:

Grizzlies:
at Knicks
Rockets
at Wolves (back to back)
Spurs
at Blazers
at Lakers
at Kings
Bobcats
at Rockets
Clippers (b2b)
at Mavericks
Jazz

Notes: 5/7 home/road split with two back-to-backs and 9/12 against teams currently in the playoff race. Grizzlies are difficult to project based on how they've played without Marc Gasol and the uncertainty of his return. If the team gets back on track, 8-4 seems like a reasonable finish, which would get them to 55-27, but it could easily be a little worse if their defense continues to flounder without Gasol. The “Hollinger Playoff Odds” on ESPN.com has them projected at 54-28.

Notes: 5/6 home/road split with two back to backs and 6/11 against teams currently in the playoff race. But not included among those playoff-caliber opponents are the Hornets, whom the Clippers still play on the road twice. The Hornets have beaten both the Grizzlies and Nuggets in the past week, so the Griz will hope they can continue to play sleeper. I'm feeling a 7-4 finish against this schedule, which would also land the Clippers at 55-27, which is where ESPN also has them projected.

Notes: 6/4 home/road split with one back to back and 8/10 against teams currently in playoff race. Denver has to play better teams on average but with more rest and more games on their near-insurmountable home floor. Like the Grizzlies, there's mystery here about the availability of their most important player, point guard Ty Lawson. I'm saying 7-3 the rest of the way, which would put the Nuggets at 56-26. ESPN has them at 55-27.

2. Getting There Without Gasol: As I noted yesterday, the Grizzlies' defensive performance has plummeted in two games without Marc Gasol in the middle. The Grizzlies, in recent years, have made a habit of thriving in the face of adversity, rolling along in the absence of Rudy Gay two seasons ago and without Zach Randolph last season. Gasol missed only two games total in those two seasons, but the Grizzlies' precarious playoff hopes did fall apart the season before when Gasol missed most of the season's final month. Overall, over the past four seasons, the Grizzlies have registered a 174-126 record but are 7-10 without Gasol in the lineup. That's still a too-small sample size to draw many conclusions, but it should surprise no-one if losing Gasol proves to be a bigger hurdle than losing Gay or Randolph. Gasol is a more versatile player at a position where talent is more scarce. He's the foundation of the team's defense and, at least since the Gay trade, has been the co-director of the team's offense (with Mike Conley).

His absence is a big problem and you have to wonder, in retrospect, about his workload. Gasol apparently suffered the initial abdominal tear on March 6th and re-aggravated it on March 22nd. In the 10 games linking those two dates, Gasol played 37 minutes or (usually) more eight times. The team has been mum on specifics about the game plan with Gasol the rest of the way. No one seems to think the injury will keep him out of the post-season, but it needs rest if it's going to improve at all before that point. Given that, my best guess is that Gasol would be held out for at least a couple more weeks. But, as long as he's going to give it a go in the playoffs, I do think we'll see him again in the regular season — even if it's just in limited minutes in the final 2-4 games. 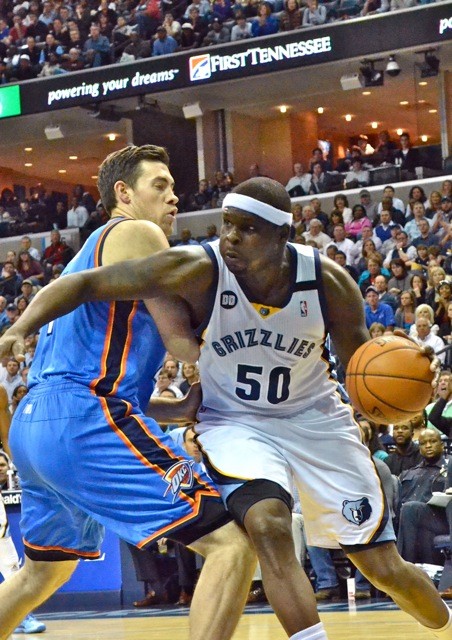 3. The New Z-Bo Reality: One school of thought when the Grizzlies traded Rudy Gay was that it would move Zach Randolph back to his rightful place as go-to scorer. But, in reality, the Gay trade has had an amazingly minimal impact on Randolph's role or production:

Instead, Randolph has shared the scoring burden relatively equally with Marc Gasol and Mike Conley (and, lately, Jerryd Bayless), while the offense itself has been run through Conley and Gasol with Randolph as more of a finisher/“garbage man”/secondary option. The one game recently where the Grizzlies ran their offense primarily through Randolph was against Oklahoma City. The result was 23 field goal attempts and 7 turnovers up against six made field goals and zero assists.

With Gasol out the past two games, Randolph's production actually declined rather than increased, scoring 25 points on 9-21 shooting across both games. Now, that's only two games and there were mitigating circumstances, especially against Boston, where Randolph came off the bench to start the game after missing shoot-around earlier in the day. On the other hand, both teams were missing their primary frontcourt defenders (Kevin Garnett and Nene) and the match-ups were seemingly favorable for Randolph.

I don't want to sound too much of an alarm here. Randolph is still an elite rebounder, a good scoring option, and, when he really wants to be, a better defender than his reputation. But we've got a full season of evidence now and there's no reason to expect Randolph to carry the team offensively the way he did two years ago. (Randolph has hit the 20-point mark only once in his past 18 games.) Randolph still shoots well from mid-range (40% since the Gay deal) and is still a huge factor on the offensive boards, but he doesn't draw double teams as readily as he once did and isn't as strong a finisher in the paint (52% in the restricted area since the trade, down from 58% before and 61% at his peak two years ago).

The version of Randolph the Grizzlies will have this post-season is very likely to be the one they've had all season: Better than last spring's post-injury model but well short of the previous spring's pre-injury model. In other words, an effective cog in a balanced attack but not the alpha dog. And that makes Gasol's return all the more crucial.

(I've been asked a lot lately about Randolph's fate this summer. I don't want to get into off-season speculation too heavily when there are more pressing issues to deal with, but I will say this: My hunch, for now, is that Randolph's value as a member of the Grizzlies — both on and off the floor — will be more substantial for the remainder of his current contract than his value as a trade commodity.)

4. The Small-Ball Option: With Gasol out, the Grizzlies have played a good bit of “small ball” with Tayshaun Prince at the four flanked by one of the team's bigs. Those lineups played 17 minutes against Washington and were +8 in a game the Grizzlies lost by double digits. Against Boston, those lineups also played 17 minutes, going +2. Since deploying Prince at the four to close out a game against Portland a few weeks ago, the Grizzlies have used this look a decent bit — although the absence of Darrell Arthur had a big hand in this — and have had a lot of success with it. Of the five lineups with Prince at the four that have spent at least 10 minutes together on the floor, all have been positives, most hugely so. (For what it's worth, that includes two lineups with Gasol, two with Ed Davis, and one with Zach Randolph.)

A lot of this success is a credit to Lionel Hollins for spotting these lineups judiciously, but Prince's ability to rotate up and provide an approximation of Gasol's ball-handling and playmaking from the frontcourt is another facet of a versatility that's made Prince such a good fit even without adding much three-point shooting. How much this look is used in the playoffs will depend on match-ups, but it gives the team an extra option in Gasol's absence or if his minutes are limited. Especially if Jerryd Bayless and/or Quincy Pondexter are playing well.

5. Tonight's Game: The Grizzlies head to the Garden tonight to face the New York Knicks. Gotham's squad floundered for a good while after the All-Star break but have now won five in a row. Carmelo Anthony (29 points per game during the current streak) and J.R. Smith (23 ppg) will stress the Grizzlies defense if the post-Gasol malaise continues at that end. With Tyson Chandler out with a strained neck, the Grizzlies will again face a team without its center and defensive anchor. My guess is we'll see a lot of small-ball tonight, with Tayshaun Prince playing the four and defending Carmelo Anthony. Also keep an eye on: Clippers at Hornets and Nuggets at Spurs.