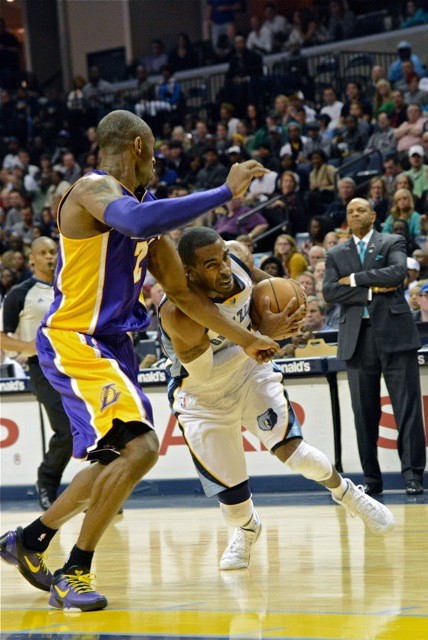 Weekend Recap: The Grizzlies split weekend games against Los Angeles Lakers and Sacramento Kings — both two-point contests — to complete a 2-1 West Coast road trip. Given the franchise's history along the Pacific that's a good trip no matter the circumstances.

Each game was marked by a semi-controversial non-call at the rim and near the end of the game. In the Lakers game, it was Mike Conley driving in to tie and being smothered up by Dwight Howard. In the Kings game, it was Marc Gasol blocking DeMarcus Cousins' drive. Did Howard get Conley with the body? Did Gasol get Cousins on the wrist instead of the hand? Even after a few in-game replays both non-calls looked inconclusive to me. So much of basketball officiating is about judgement calls and I thought both of those non-calls were, at minimum, defensible.

Of wider note, Mike Conley continued his recent scoring trend, notching 46 points on 18-33 shooting, leading the team in both games. As for his being featured late, we'll get to that in just a minute.

On the other side of the ball, Marc Gasol continued to bolster his Defensive Player of the Year case. Against the Lakers, Gasol had eight defensive rebounds, three steals, and two blocks while helping hold Dwight Howard to 9 points on 3-7 shooting. In the second half, as the Grizzlies were overcoming poor early shooting to get back into the game, Gasol strung together a series of terrific defensive plays. Against the Kings, Gasol notched five blocks, with two coming in the final 20 seconds to seal the game: The first was on Cousins. On the second, Gasol swallowed up Marcus Thornton and snatched away his attempted game-winner at the buzzer.

On the downside, Zach Randolph struggled over the weekend, shooting 11-30 over two games and often struggling to finish shots over defenders in the paint. Randolph is averaging 13 points on 43% shooting over his past 10 games and seems to be creeping into the playoffs in distressingly similar form to his limited post-injury performance last spring.

Playoff Race: With the Grizzlies splitting and Denver winning it's lone game over the weekend, the Nuggets inched another half game up on the Grizzlies in the race for the #3 seed. The Nuggets poured 132 points on the Houston Rockets despite playing without its two leading scorers on the season, Ty Lawson and Danilo Gallinari. The Grizzlies are a full game back of the Nuggets with five games to go and the Nuggets have the tiebreaker. There's still a chance of finishing ahead of them, but the odds are looking increasingly bleak. As for the Clippers, they secured their first Pacific Division title with a win over the Lakers yesterday, but the Grizzlies are still a game up on them in the race for homecourt advantage in a potential first-round series. This Saturday's FedExForum battle between the teams looms larger with every passing day.

The NBA schedule is dormant today in deference to the NCAA championship game, so the standings will hold steady.

Rudy Gay Trolling: Mike Conley missed two chances to take the lead (a step-back mid-range jumper over Steve Blake) or tie it up (the drive denied by Dwight Howard) in the final five seconds against the Lakers, which gave at least a couple of national NBA writers what must be a distressingly rare opportunity to chirp reflexively about how the Grizzlies miss Rudy Gay's late-game shotmaking.

Might Gay have gotten and made the final shot in that game? Sure. He's done it before. But let's allow a few facts to add some context here:

In tight games this season — games decided by five or fewer points or in overtime — the Grizzlies were 4-7 prior to trading Rudy Gay. In close games since the trade, they've gone 6-1.

Or, to be more specific on this contrast, per NBA.com, here's a comparison of both overall team offense and “clutch” offense before and after the trade:

So, the Grizzlies' team offense has improved and the “clutch” offense (last five minutes, game within five points) has dramatically improved since removing the urge to rely on the late-game Rudy Gay shot-making abilities some think the Grizzlies can't live without.

Before missing those two shots against the Lakers, Mike Conley had, of course, made the game-winner against the Spurs. Against the Kings, Conley hit a nine-foot runner with 30 seconds to play for the go-ahead bucket.

Is there reason to be concerned about the reliance on Conley in recent games for closing offense? Maybe, but only in the sense that, with this team, no-one should be the kind of designated closer Gay was treated as. But all four of those Conley attempts were good shots and he made 50% of them. I also suspect featuring Conley so strongly of late is partially a result of his own strong play and partially a result of other team factors: Zach Randolph's relatively poor recent performances, Marc Gasol's match-up with Howard in the Laker game, Jerryd Bayless' absence against the Kings.

The Grizzlies' “final play” offense is something worth monitoring as the offense continues to evolve post-Gay, but I don't see any real reason to question the play-calling or execution over the weekend.

Will Barton's Big Night: No Grizzlies relevance here, but of local note is former University of Memphis star Will Barton's huge night — 22 points, 13 rebounds, 6 assists, and 3 steals off the bench — in Portland's Sunday loss to the Mavericks. Barton has not had a particularly good rookie season and this performance could easily be a late-season mirage, but Barton has talent and his biggest obstacle to forging a good pro career is probably physical development. He needs to get stronger, but could also look to the slower-than-thought development of the similarly sleight Corey Brewer for inspiration. He's got enough talent that, as with Brewer, speed and energy could make him a good pro even if he remains something of a wisp.