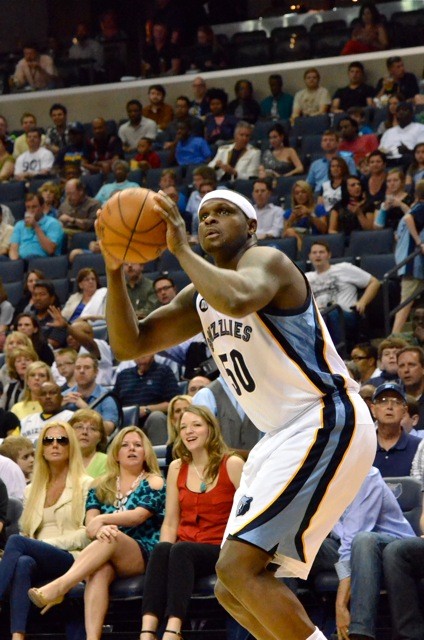 The Grizzlies kept hope alive for a few hours last night with an 86-70 win over the Utah Jazz at FedExForum, but that hope for homecourt ended when the Los Angeles Clippers squeaked out a road victory on what could have been the last night of NBA basketball in Sacramento. Now, the first round playoff series rematch between the Grizzlies and Clippers will open Saturday night in Los Angeles before returning to Memphis for games three and four next Thursday and Saturday. The series schedule (all times central):

Game Recap: After trading baskets with the Jazz in the first half, the Grizzlies brought down the hammer defensively in the third quarter — something we've seen quite a bit this season — holding the Jazz to 13 points in the quarter and building a lead that was never seriously threatened. The best news came up front, where Zach Randolph had his best game in months, with 25 points on 10-20 shooting and 19 rebounds in only 32 minutes. Randolph didn't face the most stout defenders in Utah's Al Jefferson and Paul Millsap, but his energy and relentlessness were encouraging nonetheless. It was a nice, confidence-boosting performance to enter the playoffs on. Off the bench, both Ed Davis (nine rebounds and four blocks in 22 minutes) and Darrell Arthur (5-9 shooting in 16 minutes on a flurry of mid-range jumpers) did what they do best well, and both at the same time. We haven't seen that occurrence enough in the regular season, but a repeat might win a playoff game.

Final Record and Attendance: The win pushed the franchise record victory total to 56. As Grizzlies VP, John Hollinger, noted on Twitter last night, only once before since expanding to a 16-team playoff field, in 126 prior occurrences, has a team hit the 56-win plateau and not had homecourt in the first round. (Team in question: The 1998 San Antonio Spurs.)

Last night's announced attendance, 16,777, pushed the final season average to 16,624, continuing a four-year upward trend and nearing the franchise best from the inaugural season at FedExForum. The final attendance averages since the Forum opened:

Playoff Preview Schedule: My Grizzlies cover story from this week's Flyer is now online. In it, I write about how the team has evolved since the mid-season Rudy Gay trade and what the state of things are entering the postseason. I single out a handful of playoff “x-factors,” and I look at five figures whose postseason performance could be particularly relevant to their future with the team. If you're in Memphis, however, I would encourage you to read it in newsprint form, where the layout on this one is, I think, particularly engaging.

But I'm not done. I'm planning a mammoth, two-part, series-specific preview. The first half will post later this afternoon, with the second part coming tomorrow morning.