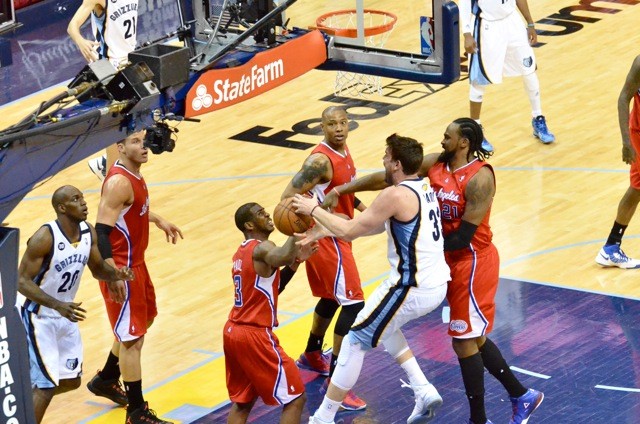 The big trains from Memphis kept rumbling along Saturday afternoon at FedExForum, as Zach Randolph and Marc Gasol combined for 48 points and 22 rebounds on 61 percent shooting to lead the Grizzlies to a 104-83 victory over the Clippers that sends this series back to Los Angles tied at two games apiece.

Fitting their city's pro wrestling heritage, this was a classic tag-team affair.

Randolph got it going early — in more ways than one. Randolph's 16 points on 8-11 shooting in the first half came with 10 attempts at the rim. How has Randolph's game transformed since his middling production in Los Angeles? Randolph credits the home-court eruption to “getting the ball in the right spots, being aggressive, going a little faster instead of waiting for the double team.”

Gasol echoed this, saying the team had to get Randolph the ball in the right spots instead of getting it to him in isolation situations and asking Randolph to simply go get shots.

In the second half, the team made a clear choice to emphasize Gasol, and he responded with 18 points and 6 rebounds on 7-9 shooting in the half, all of his second-half shots, in contrast to Randolph, coming on short or mid-range jumpers. Gasol's three quick makes early in the third quarter helped keep the Clippers from building any kind of lead, and Gasol hit a couple of back-breakers later in the quarter: A 23-foot catch-and-shoot make off a Tayshaun Prince in-bounds pass, with .6 seconds on the shot clock, to tie the game at 60, and then a 13-foot baseline jumper off a Tony Wroten feed with .2 seconds on the clock to end the quarter and give the Grizzlies a two-possession lead going into the fourth. What does Gasol present to opposing defenders?, Randolph was asked later. “Trouble,” he responded.

And it wasn't just Randolph and Gasol's scoring. They combined for more offensive rebounds (seven) than the Clippers' entire team (five). The most important sequence in the game might have come midway through the fourth, when Gasol contested Blake Griffin at the rim, forcing a miss, securing the defensive rebound, and starting a fastbreak that ended with a drop-down assist from Randolph to Tony Allen, who finished at the basket despite a Griffin foul and hit again from the line. The Grizzlies were up 10 at the time and the sequence made it a 13-point game with 7:14 to play instead of the 8-point game it might have been if Griffin had converted over Gasol. From that moment, the Grizzlies blew the game open.

“We haven't accomplished anything yet,” Gasol said after the game. “But we've gotten a little bit better every game, and we have to continue to do that.” 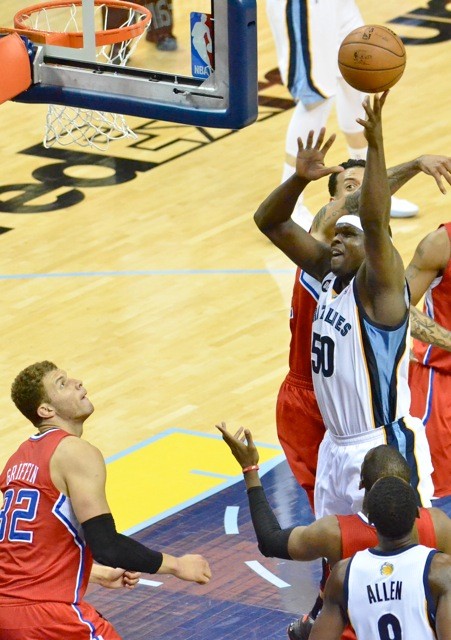 One key to this improvement has been the gradual emergence of supporting players around the Mike Conley-Randolph-Gasol fulcrum. (Conley had 13 assists and only two turnovers after a 10/0 performance in Game 3, and his straightaway three that pushed the lead to 16 midway through the fourth felt like a game-ender.)

After returning from witness protection in Game 3, Quincy Pondexter was again strong in Game 4, giving the team a 10-point boost and playing strong defense in nearly 29 minutes off the bench. And this time, Tayshaun Prince joined in. After a dreadful first three games of the series, veteran starter Prince knocked down a 17-foot baseline jumper for the game's first score and continued to be aggressive and effective. Prince put up a 15-6-3 line in 37 minutes, and his ballhandling — both to bring the ball up floor and to initiate sets — seemed to be called on even more.

“I'm not that great of a coach,” Lionel Hollins said with a laugh, when asked after the game if the team intentionally put the ball in Prince's hands more to get him out of his early series slump. “We do like Tayshaun handling the ball and taking pressure off of Mike [Conley]. Multiple ballhandlers and versatility makes the game easier.”

Jerryd Bayless continued to struggle since Game 1. He went scoreless in nine first-half minutes, missing open jumpers badly, and was benched in the second in favor of an entirely acceptable four-minute cameo from rookie Tony Wroten Jr. But Bayless' fading role may have as much to do with the series' defensive match-ups as with Bayless' lack of offensive production. The defense of Tony Allen and Quincy Pondexter — both of whom can guard Jamal Crawford on the wing and also switch onto Chris Paul — is simply more valuable in this series.

That the Clippers' bench badly outscored their Grizzlies counterparts — 43-16 — in this big Grizzlies win just underscores how silly that “match-up” point is. The Clippers got a total of two points from three of their starters in this one, with two top-five Defensive Player of the Year finishers (Allen and Gasol) effectively shutting down Chauncey Billups and DeAndre Jordan. The Grizzlies won the match-up of rosters, which always proves decisive. 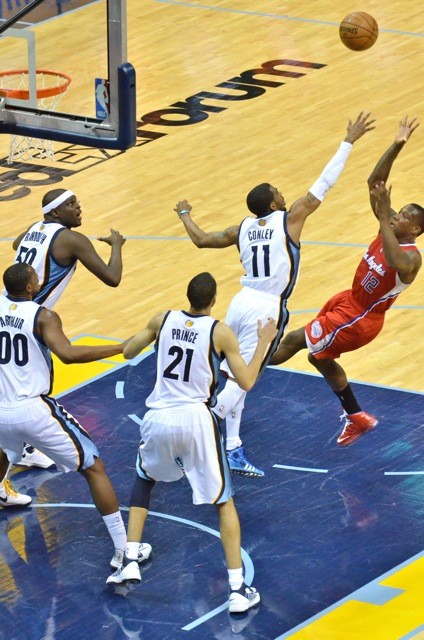 For a while, it looked like Chris Paul was going to take over this game. Paul scored eight points on 4-5 shooting in the last three minutes of the first half, giving the Clippers a one-point lead with a driving lay-up in the 23rd minute and 59th second of the half after the Grizzlies had lead — by as much as 12 — for 23 minutes and 47 seconds of the half. Three of Paul's four baskets in this stretch were right at the rim.

Meanwhile, the Grizzlies' offense was falling apart, scoring 13 points on 6-18 shooting in the second quarter and going to the right baseline on five of seven trips — two Allen baseline cuts, two Prince right block posts, and a Conley baseline cut — and coming up empty each time during a scoreless four-minute stretch.

Paul, who usually saves his ball-dominating, shot-hunting heroics for the fourth quarter, seemed set on seizing control, and the expectation — or, at least mine — was that this play would continue after the break, but it wasn't to be. Rotating Conley, Pondexter, and Allen on him, the Grizzlies held Paul to only five points on 1-5 shooting in the second half. And Paul couldn't find the help he needed. Griffin was effective in stretches. He scored eight early for the Clippers, finding open looks from mid-range too easily. In the second half, as the Grizzlies were executing a Gasol-heavy game plan, the Clippers tried to counter by getting Griffin looks on the move. It worked for a while, with Griffin scoring seven points in the first half of the third quarter, every attempt from within five feet. But, as with so much of Griffin's play in the series, it proved unsustainable, and with Paul and Griffin muzzled, the Clippers fell apart.

For the moment, at least, these two home games exorcized a lot of demons for the Grizzlies. Paul could muster no second-half heroics. For the second game in a row, Eric Bledsoe's impact was minimal. And, this time, the Grizzlies owned the fourth quarter, winning it 33-16.

If Thursday's Game 3 was a sellout in name only, this was a hard sellout, with standing fans ringing the top of FedExForum and rowdiness to spare. Now, the Grizzlies head to Los Angeles in good spirits but with much left to accomplish. And, with the injury to Russell Westbrook, star point guard of the Western Conference favorite and probable second-round opponent Oklahoma City Thunder, making a second-round series seem more winnable for whoever comes out of this series, these games seem to have even more at stake.

But if the ultimate outcome of this series hangs in the air, one tangible thing was accomplished at FedExForum this afternoon: A Game 6 in Memphis — Friday night, time to be determined — has been secured. The only question is whether the Grizzlies will then be fighting for their playoff lives or trying to close it out.