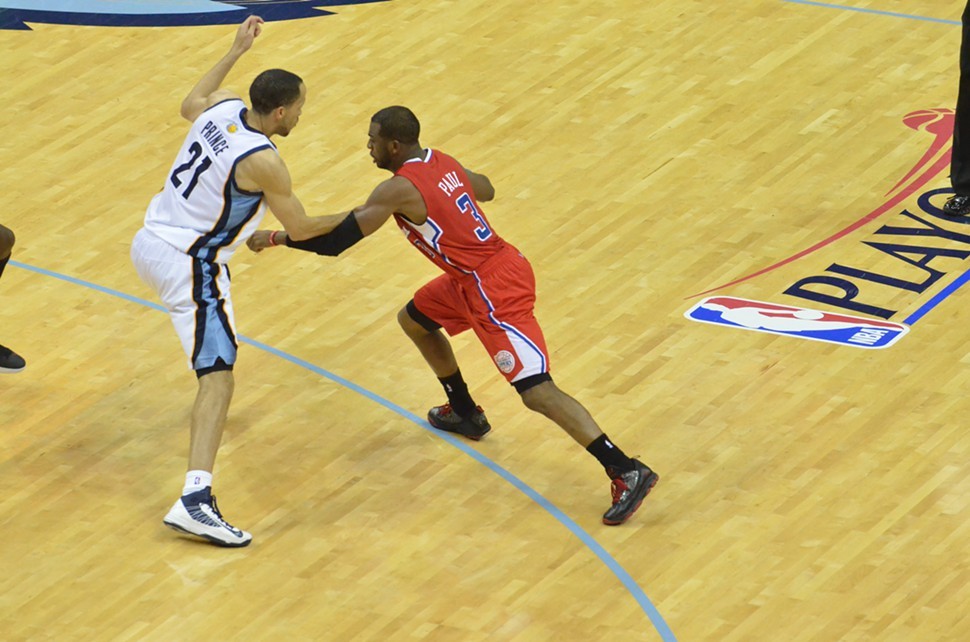 A high-stakes Game 5 between the Grizzlies and Clippers tips tonight at 9:30 p.m., Memphis time. Here are 10 takes ahead of the action:

1. Homecourt vs. Trendlines: The central mystery of Game 5 is whether what we've seen so far is simply about homecourt advantage or whether the series is evolving in a more linear way. The Clipper optimist would say both teams have merely held serve on their home floor. That these two teams are fairly evenly matched, that homecourt has been the tipping point, and that now the Clippers have a 2-to-1 homecourt advantage in a best 2-of-3 series. Could be.

But the Grizzlies optimist would counter that what we've really seen is a solid, direct trend, with the Grizzlies growing stronger each game. Consider these trendlines:

2. First Game Fluke?: An extra bit of evidence to the “trendline” theory of this series: Game 1, increasingly, looks like an outlier, not in terms of performance, which is impossible to predict, but in terms of roster usage on the Grizzlies part.

“Foul trouble” — which is not predictable — played a role in the Grizzlies' rotations, but impacted the two teams equally in the Zach Randolph/Blake Griffin match-up, where each played 25 minutes. Elsewhere, the Grizzlies did things in that game that weren't totally explained by fouls and that haven't and almost certainly won't be repeated: Austin Daye getting first-quarter minutes. Keyon Dooling playing more minutes (18) than Tony Allen (17). Jerryd Bayless' good shooting prompting 30 minutes of court-time even though his defense was problematic and the team was a -11 when he was on the floor.

Quite literally, the Grizzlies team that played in Game 1 is not the same team that's played since or will play in Game 5. Unfortunately for the Grizzlies, that game counted.

3. Fouls, Physicality, and Z-Bo: Zach Randolph played better in the two games in Memphis, but perhaps more significantly he played more. In Los Angeles, Randolph seemed intent to wrestle Blake Griffin, resulting in early fouls that limited him to 56 minutes in the two games. In Memphis, instead of hand-to-hand combat, Randolph found a better balance between fluid and physical, and with the games also seemingly called a little more loosely, Randolph was on the floor for 74 minutes and it all worked perfectly to his advantage.

Through four games, Randolph has outplayed the younger, more celebrated Griffin, which has been surprising given their regular seasons. Per 36 minutes, Griffin has averaged 19 points and 7 rebounds on 46% shooting, and the Clippers have been -8.1 with him on the floor. Randolph, by contrast, has averaged 21 points and 9 rebounds per 36 minutes on 56% shooting and the Grizzlies have been +10.2.

There was a legitimate expectation that Randolph would step up his production — if not his efficiency — in the post-season, but so far he's done more than could reasonably have been hoped given his post-All-Star break regular-season fade.

After the All-Star break, Randolph took about 69% of his field-goal attempts in the basket area, but converted only 49% of them:

But in the playoffs, through four games, Randolph has concentrated his attempts more in the paint (up to 78% of his attempts in the basket area) and significantly boosted his success rate (up to 65%):

Part of this is how well Randolph has played, but another part of it is usage. Randolph is leading the team in scoring so far in the series, but the offense is primarily moving through Conley and Gasol, and that's the best path for the Grizzlies. This means getting the ball to Randolph in close, in positions to quikcly catch and shoot or drive rather than a heavy diet of pause-button isolations.

If Randolph continues to produce at this level — and Griffin can't elevate his disappointing post-season play to match it — then the Grizzlies should be in good shape.

The Grizzlies have changed — and obviously improved — their defense on Paul generally and his pet pick-and-roll specifically as the series has progressed. While the complexities of team defense and the pick-and-roll are endless, I've noticed three specific changes that seem to be bearing fruit.

The most obvious and perhaps significant is that the Grizzlies have changed who's guarding Paul. In Game 1, small guards Conley, Keyon Dooling, and Jerryd Bayless had the assignment, with Tony Allen switching onto Paul for maybe a possession or two during the game. In Game 2, the Grizzlies switched Allen onto Paul for the last couple of possessions of the game. But, back in Memphis, the Grizzlies generally went bigger on Paul, with Pondexter and Allen logging heavy minutes on him in the second halves and even Tayshaun Prince switching onto him a couple of times.

Those guarding Paul now seem to be playing his right hand even more than before, funneling him left into post defenders who are stepping up even more aggressively. In Game 4, especially, you could see the Clippers responding to this by sometimes setting picks far out beyond the three-point line to give Paul more space and a head of steam to attack the paint, and the tighter help defense on Paul also seemed to yield more open three-point shots in the second half. The Clippers went cold though — 2-15 from three in the second half of Game 4 — and that, as much as anything, fueled what became a blowout.

5. Three-Point D Coming Through, So Far: As indicated above, this is a good trend for the Grizzlies I would worry about from a Memphis perspective. I wrote about it in my series preview: The Grizzlies had the best three-point defense in the NBA after the Gay trade, while the Clippers were, overall, a slightly above-average three-point shooting team in the regular season. So far, at least, that battle has tended to tilt in the Grizzlies favor:

But, again, I suspect the Grizzlies got a little lucky in Game 4. If shutting down the lane on the pick-and-roll continues to yield open long-range looks, it wouldn't be a shock if the Clippers started connecting back in Los Angeles. But given how fearsome Paul is, maybe that's a gamble worth taking.

6. Will the Clippers Make Significant Lineup Adjustments?: Where the Grizzlies seemed to be searching in Game 1, they've increasingly settled down into a fairly static rotation. One of the positive aspects of their inferior depth, perhaps, is having fewer opportunities to second-guess or muck things up.

The Clippers, with a deeper bench that they need even more, may be the ones searching now. Over the series, the Grizzlies' starting unit (+16.1 per 48 minutes) has badly outplayed their Clipper counterparts (-13.1), and have been especially stingy on the defensive end (allowing 90.8 points per 100 possessions).

By and large, the Clippers seem to be at their best when Paul and Griffin are flanked by more dynamic bench players, with starters Chauncey Billups, DeAndre Jordan, and Caron Butler giving the team, generally, far less than the bench options.

While I don't think we'll see a starting lineup change for the Clippers, I do wonder if we'll see an even sharper shift toward the likes of Eric Bledsoe, Jamal Crawford, and Matt Barnes tonight. If things go poorly for the Clippers early, I suspect you'll see more three-guard lineups and maybe even more full small-ball, with four perimeter players around Blake Griffin — a configuration the Clippers didn't use much in the regular season. The Clippers tried both of these gambits in the second half of Game 4.

The emergence of Quincy Pondexter allows the Grizzlies to match up pretty well with three-guard alignments, where they can put Pondexter on Paul, Allen on Crawford, and Conley on Bledsoe or Billups. (Incidentally, the “but then we'd have to put Conley on Billups” talking point is now looking like the silliest bit of business in the series.) But going truly small forces Griffin to guard Gasol, and I don't know if getting a Zach Randolph-Matt Barnes match-up is worth that for the Clippers. Clipper line-ups are already trouble enough for Griffin in the fourth, where the need/desire to sit Jordan and his 39% foul shooting enables the Grizzlies to put Gasol on Griffin down the stretch.

7. A Workable Wing Rotation: A Game 4 tipping point for the Grizzlies seemed to be the play of their wing rotation — Allen, Prince, and Pondexter — which has been the big question for most of the series. None of these players did all that much in the blowout Game 1 loss. Allen showed up strong in Game 2, and has been steady since. (Allen has boosted his defensive rebound rate from 13.9 in the regular season to 22.1 [!] in this series, which has been a key factor against the Clippers.) Pondexter emerged in Game 3 and backed up his play in Game 4, where Prince finally — finally — joined in. With all three playing well at the same time, the floodgates opened for the Grizzlies.

These staggered arrivals may be a subtle reason for the series trendline in the Grizzlies' favor. But whether all three will travel back to Los Angeles in this form is an open question.

8. Who Spells Conley?: A small thing at this point, but the only real lineup question left, unless Lionel Hollins throws an unexpected curveball tonight. Keyon Dooling's availability is still questionable. Jerryd Bayless got the early call in Game 4, but couldn't get a jumper to fall. Tony Wroten acquitted himself pretty well in a brief second-half run, but I have a hard time imagining Hollins throwing him back out there in this situation.

I would expect Bayless to get the primary call when Conley's on the bench, but the real reason he's been limited in this series is defense, not offense. Even when Bayless was making shots in Game 1, the team struggled with him on the floor and has givin up 127 points per 100 possessions when Bayless has been on the floor in the series. Asking Bayless to guard Paul or Crawford given the current stakes is probably asking too much, as might be handling against Bledsoe's pressure. Spotting Bayless against Billups is hard to do unless you start him (an idea I bounced around earlier in the series). It's a tough spot for a player who was so good in the second half of the regular season, but such are the match-ups. My best guess would be to keep Prince on the floor when Bayless is at the point and try to match him up defensively with Billups or Bledsoe if possible.

9. Marc Gasol's Jumper: With Randolph so strong in the paint, Gasol's mid-range game completes the high-low dynamic that drives the Grizzlies offense at its best. The biggest difference between Gasol's offensive play in Los Angeles and in Memphis was that, at home, he spent less time on the low block and more time torching flat-footed, paint-bound defenders (namely Jordan and Ronny Turiaf) with short and mid-range jumpers: 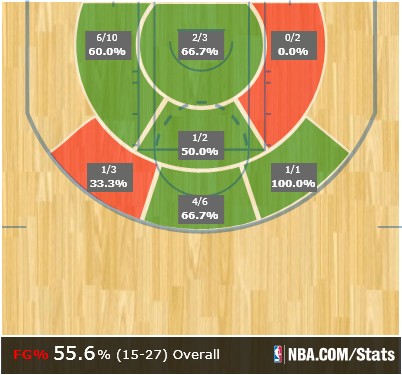 Gasol is the only player carrying a truly heavy minutes load — 41 a game — and the Grizzlies defense has allowed 135 points per 100 possessions when Gasol's been on the bench. The Grizzlies need him in the game to feel good about their chances. If Gasol's "jumper" keeps dropping, the Clippers are in trouble.

10. Is This the Series?: Let's end with the obvious: The winner tonight becomes a strong favorite in this series. An honest assessment still gives the Clippers the edge, but I tend to trust the trendlines, so I think the edge is pretty thin. If the Conley/Randolph/Gasol trio are effective and aren't disrupted by serious foul issues tonight, I like the Grizzlies' chances.