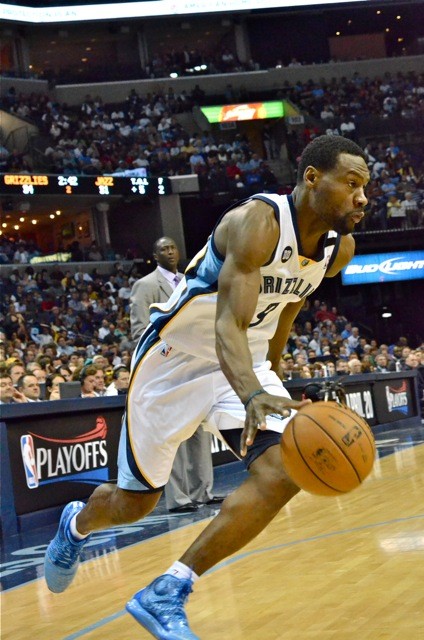 With six seconds left in a decided game, Tony Allen stole the ball and did what you're not supposed to do, streaking down the floor for a needless exclamation dunk, then soaking in the boos it provoked. Seconds later, according to the Twitter feed of Commercial Appeal beat writer Ron Tillery, Allen walked by the scorer's table and yelled, “First team, all defense [expletive].”

Was Allen taunting his opponent or the fans in Oklahoma City? I doubt it. More likely, his target was some mix of the basketball gods, himself, and his coach. He was letting out some frustration and reasserting something that seemed to have been forgotten. And he did it with his game before he did it with words.

In Game 1 of this series, Allen — by acclamation one of the two or three best perimeter defenders in the league — played only 21 minutes in a game in which his team gave up 60 of 93 points to two wing players in Kevin Durant and Kevin Martin. He sat for most of a fourth quarter in which his team gave up 29 points and watched a nine-point lead evaporate as Durant made a series of big plays down the stretch.

Afterward, his coach, Lionel Hollins, explained that Allen was too short to guard Durant now. Using other defenders on the Thunder's brilliant star, the Grizzlies had surrendered 35-15-6 on 13-26 shooting.

Through three quarters Tuesday night, it looked like more of the same. Allen had played only 13 minutes (and had shot 1-7) while Durant already had 26-9-8 on 7-14 shooting. But this time, Allen not only played the fourth — 10 and a half minutes of it — he was the primary defender on Durant for most of those minutes.

Durant scored 10 points in the fourth, but seven of those came early in the quarter and the other three came on a hoop-and-harm drive during a brief moment when Allen was on the bench. In the final seven minutes of what was, at the time, a one-point game, Durant did not score on Allen, who seemed to make him more physically uncomfortable than Tayshaun Prince or Quincy Pondexter had. And with Allen mostly corralling the Thunder's top scorer, this time it was the Grizzlies who notched a big, come-from-behind fourth quarter.

Durant is an unfathomably talented scorer and is capable of excelling against any defense or defender, but Allen's shutdown performance in these crucial minutes were a reminder that, despite protestations to the contrary, Allen can guard Durant as well as or — more likely — better than any other option the Grizzlies have.

After a rough Game 1, Conley struggled again in the first half of Game 2. His jumper still wasn't falling, and he looked tentative when he turned the corner on defenders and had a chance to drive, as if league-leading shot-blocker Serge Ibaka was spooking him.

But Conley gathered himself for a massive second half, scoring 19 points on 8-12 shooting after the break and hitting the game's biggest buckets in the final minutes — a go-ahead three-pointer with less than than two minutes to play and then a cool 18-footer nearly a minute later to give the Grizzlies a two-possession lead.

With Conley going large and Thunder sixth man Kevin Martin (2-11 shooting) cooling off, the Conley/K-Mart Correlation swung the Grizzlies way this time. It remains to be seen what will happen if both are good (or bad) in the same game. (Derek Fisher, who scored 19 points on nine field-goal attempts, stepped up to give the Thunder a second scorer.)

But if Allen and Conley were closers, Marc Gasol got them there, scoring 17 of his 24 points in the first half, as the team wobbled around him.

If Game 1 against the Thunder seemed like a mash-up of Games 1 and 2 against the Clippers, this one continued to accelerate the first-round pattern. Now instead of returning home down two but with confidence to compete, the Grizzlies return home 1-1 with a three-day break before Saturday's Game 5 and, for the moment at least, in control of the series.