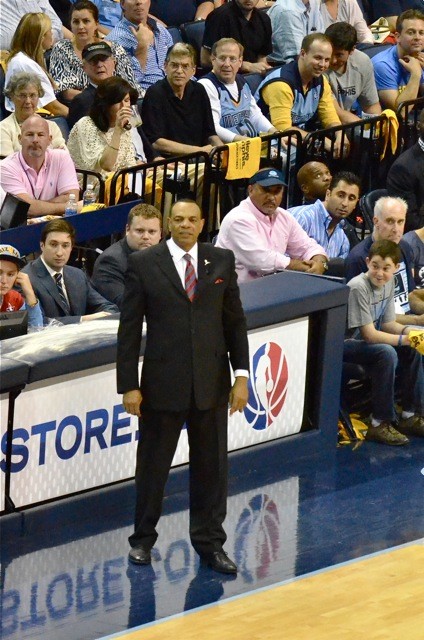 1. A Potential Farewell: The best season in Grizzlies franchise history could end tonight, and even if the Grizzlies win this one, they'll be facing steep odds with a Game 5 in San Antonio. So, by all means, “believe,” but also know that the odds are fairly strong that this could be the last home game of the season for the Grizzlies. As such, it could be the last Grizzlies game, period, for any or all of three figures central to the franchise's signature team. In order of likely departure: Lionel Hollins, who enters this summer a coaching free agent with other likely suitors driving his asking price — in terms of money and years — upward. Tony Allen, who is also a free agent this summer. And though both Allen and the team would prefer his Memphis tenure to continue, there are no guarantees. Finally, there's Zach Randolph. He's under contract next season and likely to return, but the size of his deal ($17.8 next season) and the age difference between him and fellow core pieces Mike Conley and Marc Gasol necessitates the team at least entertain trade options this summer. There are no guarantees, so home fans may want to pay proper respects tonight, win or lose.

2. Conflicting Trajectories: The Grizzlies' pattern this postseason has been, by and large, to improve as each series has progressed. Even down 0-3, that's been the case in the conference finals as well. Game 1 was a debacle. Game 2 was a potential debacle that got turned around in the second half. Game 3 was a hot start that dissipated, but the Spurs didn't acquire their ultimate double-digit victory until the wheels came off in overtime. Follow that trajectory and tonight, at home, should be a tipping point for the Grizzlies. The problem, of course, is that this potentially too-little-too-late upward trajectory is fighting against the crosscurrents of 0-3 malaise, the tendency for both players and fans to sense ultimate hopelessness and pack it in.

3. Defending Parker and Ginobili: I don't have much in the way of tactical suggestion at this point in the series, but will reiterate what's probably my most consistent criticism of the Grizzlies: I think they could be leveraging their perimeter defense assets a little bit more than they are.

Watching the series, I've developed a couple of interrelated rules — which are, of course, difficult to follow one hundred percent of the time — for how the Grizzlies should use their best backcourt defenders against the Spurs most dynamic guards:

Flip it around like this: I don't like Jerryd Bayless on Parker and think using Allen on Danny Green or some other marginal ballhandler is a waste.

I don't know if adhering to these principles as much as is feasible would turn around the series, but I think it would help. 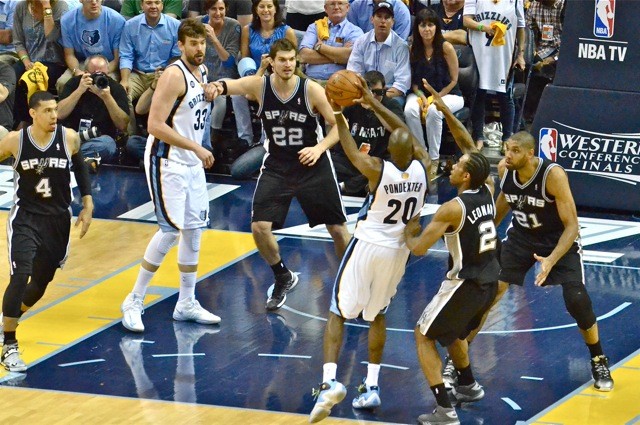 4. The Future is Now: When this season ends I'm going to do my usual roster breakdown, with quick takes on each player, on both the season they've had and their prospects heading into the offseason. This time, I think I'm going to list them in the order of most probable return. Spoiler alert: The top three names on that list are the ones who I think might have to lead the way if the Grizzlies are going to stay alive.

Randolph could always, as in Game 5 against the Thunder, break through with a big night. But with the Spurs' defense consistently rendering him a minor scoring factor, he may instead be merely a “decoy,” as he suggested at this morning's shootaround. Instead, the bet here is that Marc Gasol and Mike Conley will need to lift their play even more for the Grizzlies to extend the series.

Through three games, Conley is leading the Grizzlies in scoring at 17.3 points per game, but he's shooting only 40% from the floor with his assists down (5.3) and turnovers up (3.3) relative to his production in the earlier rounds. Gasol is beasting on the boards (nearly 12 per game), but his 14.3 points a game have come on 39% shooting.

The third mostly likely returnee for next season is Quincy Pondexter, who has had a breakout series of sorts, scoring 13 points a game while shooting 50% from the floor and 47% from three-point range (on more than six attempts a game) while leading Grizzlies wing players in minutes at 31.3 a game.

Of the 22 three-man units who have gotten at least 20 minutes together in the series, Conley-Gasol-Pondexer has been, by far, the most effective, yet it ranks only 11th overall in minutes. (Of the 10 who have played more, only one — Gasol-Pondexter-Bayless — has been a net positive.) Even in Game 3, with the success of this trio already getting notice, they were only the 13th most used trio (though Pondexter fouling out before overtime was a factor there). Only four of the dozen trios who played more minutes were a positive.

One way to get this trio on the floor together more, obviously, would be by moving Pondexter into the starting lineup. There's no indication that's about to happen. But even without it, the Grizzlies should maximize tonight one of the few things that's been working against the Spurs.