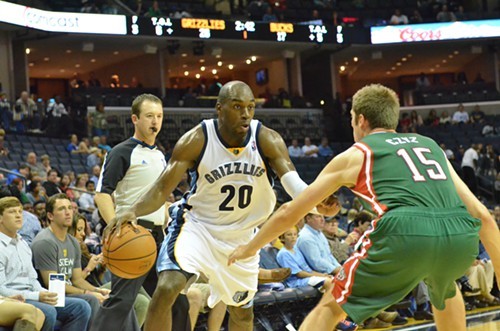 This week's Flyer is the Hoop City issue, an in-depth look at what to expect from Memphis' two major hardwood collectives this upcoming season: Frank Murtaugh had ten questions for the Tigers and I had ten for the Grizzlies.

Of course, I've been known to run a little long in my first drafts, so there were some questions that didn't make the final cut that I still think are worth exploring a little bit. Call these the "deleted scenes" from my print Griz preview piece, which maybe someday I'll re-edit with these and release as Grizpocalypse Now Redux (I admit, that may be the worst joke I've tried to make in these pages yet). Here's what got left out:

11. Is Marc Gasol going to score more this year?

Coming off a strong showing in this summer's Eurobasket, where he averaged 14 points a game while doing his usual high-post wizardry, Gasol talked a little bit about the faster pace at which the Grizzlies would be operating this season, and said that he felt like he was going to be less reluctant to take a shot this year. Like he was going to be able to take those shots we've been yelling at him to take for years now.

He also did this:

But look, I'll believe the New Improved Scoring Machine Marc Gasol when I see it. That's just not the way Gasol plays. He looks to make the perfect pass to set up his teammate for the easy bucket, even when he potentially has an open shot. On offense, he's a facilitator first. Asking him to start turning into a low-post scoring threat (which he can be when he wants to) or a volume shooter from the elbows (which he can also be when he wants to) is asking him to change the way that he approaches basketball—and I think he's been playing it long enough that it's a little late for that.

I'm not saying I don't think he'll score more points this year on average—but I think that's going to have more to do with the fact that Dave Joerger has explicitly said the Grizzlies' offense will feature Gasol and Mike Conley as the primary players than it does with Gasol suddenly becoming, well, Z-Bo-like on offense. I, for one, like Gasol's game just the way it is.

12. How much of a factor will Zach Randolph's age be this year?

In the original article, the main Randolph-related question was "will he be here at the end of the year." But I think there's another thing to talk about with Randolph that's even less fun to discuss. I'm going to end up branded a doom-and-gloom guy if I keep this up, but these are things that national writers are starting to talk about, most eloquently this piece by Tom Ziller at SB Nation. Zach Randolph isn't a young guy anymore. Sure, his game is physical in a way that lends itself to an extended career and a slow decline, but that doesn't mean that he's going to be able to keep churning out 20-10 averages on the season forever. At some point, he's going to have to start to adapt the way he plays basketball to what he's able to do physically, and it remains to be seen how well that transition is going to go.

The dirty little secret of Zach Randolph's rebounding numbers is that he gets so many offensive rebounds because he gets them on his own misses. The Z-Bound is legendary, and for good reason: Randolph has a unique ability to clean up whatever mess is going on under the basket and turn it into a putback. But as he ages, and loses what little lift he had to begin with, the Z-Bounds sometimes stretch into two or three self-OREBs before the bucket, and more and more often the jab-step jumpers from twelve feet out are getting stuffed into the courtside seats. That's not to say that Randolph is ineffective—he's clearly still the best post scoring option the Grizzlies have, and he's still the stuff of nightmares for opposing teams (especially Blake Griffin), and the Grizzlies need his cleanup abilities desperately. But the signs of decline are starting to creep in, barely perceptible. It'll be interesting to watch Z-Bo battle time the same way he battles opponents (though time is harder to put in a chokehold).

13. Who's going to start at small forward?

This one started generating chatter at the end of the Grizzlies' playoff run last year as Quincy Pondexter ramped up his play and his scoring output during the Western Conference Finals—seemingly the only Grizzly able to do so—while Tayshaun Prince struggled playing hurt. It's clear that Pondexter has continued to improve his game, and he's got his sights set on making a mark this year. (And why wouldn't he? He's a restricted free agent after this season. Between that and the Grizzlies' playoff chances, he's got every reason in the world to play harder than ever.)

I've used this phrase before, but it's clear that Tayshaun Prince is entering the "Elder Statesman" phase of his career. He was looking to get completely healthy headed into this preseason before a stomach illness wiped him out—rendered him incapable of practicing and playing and even made him lose a scary amount of weight. At this point, who knows when he's going to be in game shape, let alone healthy enough to go out and play well. But I don't think he's ready to retire. Prince played very well in the regular season for the Grizzlies last year (even if he did step in on a maddening number of wide-open threes and shoot 20-footers). It wasn't until he started to get banged up in the deep playoff run that he really started to struggle, and he was also still playing with a new group of guys in a new city, after years and years of being a Piston. Prince had a lot of factors stacked against him last season, and I, for one, having always been a fan of Prince's game from afar, was looking forward to seeing what he would do with a full preseason as a Grizzly under his belt.

Now, a good deal of that appears to have been lost. I don't think Prince will be the starting small forward on opening night at this point, but I do expect him to be in the mix at that spot once he's recuperated and ready to go. He's still Tayshaun Prince, after all, and even if his prowess has been diminished by age somewhat, he's still a good basketball player. But it leaves the starting small forward spot a wide open question. It could be Pondexter. It could be Mike Miller. It could be Tony Allen some nights, with Jerryd Bayless starting at shooting guard. This is another area where the Grizzlies' depth helps them: lots of rotation options to choose from.

The small forward battle will be worth keeping an eye on, though, especially as Prince gets healthy.