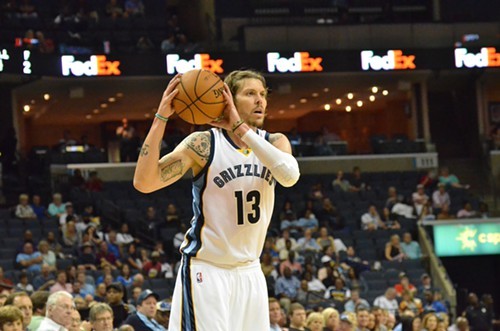 No, not the cheeseburger-and-tequila-fueled funeral dirge Neil Young album—tonight the Grizzlies are in San Antonio to face the Spurs to open the 2013-14 regular season with a rematch of last year's Western Conference Finals.

You may remember that that series ended in a 4-0 San Antonio sweep, as the Grizzlies ran into a buzzsaw of a team that (1) was determined to get back to the NBA Finals if it killed them and (2) completely prepared to take away every single advantage last year's model Grizzlies had over their opponents. The Spurs identified which Griz wings weren't perimeter threats, and simply left them completely open from long range while they crowded the interior and kept the Grizzlies' interior-oriented game from happening. It was brilliant strategic basketball, and the Grizzlies—whether it was through coaching strategy or simply the player-by-player matchups—were seemingly helpless to stop it from happening to them.

It felt like the Grizzlies were playing with house money at that point, anyway. No one expected them to get to the Conference Finals, and while I won't say that Russell Westbrook's injury is the only reason they made it past the Thunder (Scott Brooks' insistence on playing Zach Randolph's best friend Kendrick Perkins sure helped), they certainly caught some lucky breaks, as all teams must do to make it that far into the postseason. They went farther into the postseason than any Grizzlies team in franchise history (and, you have to remember, this is the only Grizzlies core lineup that's ever even won a playoff game to begin with).

The Grizzlies are coming in to tonight's game against the Spurs with a new head coach (though not someone with whom they're unfamiliar), with a completely overhauled bench, with at least one guy known around the league—especially known to these San Antonio Spurs—for his three-point abilities, with a new attitude on offense (that is, get into sets quickly and run everything through Mike Conley and Marc Gasol), and with every reason in the world to think that This Is The Year.

It's the year that they go to the NBA Finals, or they end up retooling for the next couple of years of the future. That's all. Not like there are any stakes or anything.

But none of those stakes apply to tonight. Tonight is just the first of 82 games, the beginning of a long journey. It's not make-or-break time tonight, though it feels a bit like a referendum: "Can they get past the Spurs now?" But don't make that mistake. The Spurs are going to be around at the end of the year, and so are the Grizzlies. They're going to play each other three more times before the playoffs. Tonight is important, especially as a tone-setter for the Grizzlies' tough month of November, but a little perspective will fend off the howling fantods of "oh my goodness they're going to be terrible this year" that will inevitably start popping up in comment sections if things go poorly for the Grizzlies tonight.

That said, it's a big game. And big games require talking points. So here are some things to watch for tonight.

Most obviously, the thing that sunk the Grizzlies against the Spurs last year was the lack of space in the lane—space that can only be created when the defense has to respect the shooters on the perimeter. When Tony Allen and Tayshaun Prince were on the floor together in last year's WCF, the Grizzlies struggled maintain spacing for Zach Randolph and Marc Gasol to operate. It certainly didn't help that Prince's effective field goal percentage (eFG%) was .380 and Allen's was .375, and it was that crowded lane that contributed to Zach Randolph going 16-53 for the series, meaning basically 30%.

Let me put it this way: the Spurs showed the league how to beat the Grizzlies. If the Grizzlies aren't able to flip the script this year, and force other teams' defenses to stretch out a little more and give the inside game room to operate, they're not going to be able to beat the best defensive teams in the league on a regular basis. Not unless the offense really has been retooled from the ground up. The Marc Gasol/Zach Randolph high-low (broken down excellently here by SB Nation's Mike Prada) doesn't work if neither guy can move.

On the other end of the floor, the Spurs' offensive rating—number of points per 100 possessions—for the Conference Finals was 108.9, meaning they were able to score very efficiently against the Grizzlies' world-famous (and rightly so) defense. That's what the Spurs do: they find a weakness and they pick at it until their opponent collapses. Against the Grizzlies, Tony Parker pick-and-rolled Zach Randolph to death, knowing he was probably the weakest link on the floor at guarding Parker. If the first P&R didn't work, they ran another one. If that one didn't work, they reset and ran another one. And so on, and so on, ad infinitum until the big fella was too worn out to back down Tiago Splitter on the other end of the floor. The Grizzlies are going to have to contain Parker if they're going to beat the Spurs.

My hope is that last year's Conference Finals were a master class for Mike Conley in how he can grow his game and take his career to the next level. Parker's quickness allows him to do things that Conley could also do. Becoming more Parker-like is a way that Conley can bring these new Conley/Gasol-focused Grizzlies to the Promised Land, and that starts tonight.

All in all, it should be an interesting game—on that serves as a good barometer for where both of these teams stand at the opening of the season, but not a final judgement on what they'll be able to accomplish over the next 81 games. We're going to learn a lot about how the Grizzlies have evolved over the offseason by seeing them face off the same team we saw them play last. Tonight's the night we get to see real basketball for the first time since May.