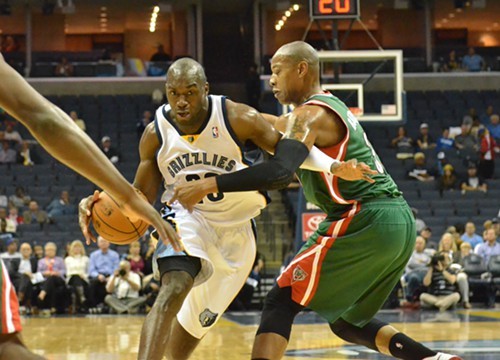 More information has come across the Twitter transom today about a contract extension for Griz wing Quincy Pondexter—the extension that was reportedly "unlikely" just last week. First was this report last night from the Commercial Appeal's Ron Tillery:

Griz expected to sign Pondexter to a 4-year extension tomorrow before deadline, per source. Ed Davis unlikely because sides are far apart


Later this morning, Chris Haynes of Comcast SportsNet NW reported in a tweet that the deal to which Pondexter has been signed is for 4 years, $14 million. If that's the case, that's somewhat less than Pondexter was widely anticipated to sign for. Most estimates had the deal being for at least two or three million more.

The extension of Pondexter comes on the heels of his great showing in last year's Western Conference Finals, and his continued development coming into the preseason this year. It's clear that Pondexter still hasn't reached the ceiling of his game, and has room to improve even more over the next four years. And, if not, this contract is certainly a good deal for the Grizzlies, and it's not likely to cause any salary cap issues going forward.

As for Davis, I think it's safe to say that the Grizzlies haven't seen enough from him yet this season—preseason games and one real game in which he played eight minutes—to know whether they wanted to commit to him at whatever price his representatives were asking. If Davis has a great year, that will turn out to be bad for the Grizzlies' hopes of keeping him. If he doesn't, it'll probably turn out to have been the right call.