Way Out West: Road Tripping with the Free-Falling Grizzlies 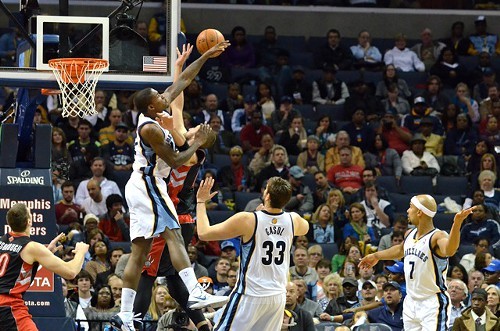 The Grizzlies are going away for a while, and hopefully while they're off on the West Coast trying to figure themselves out, they can manage to win a basketball game or two.

Honestly, at this point, sitting 3-5 after getting drilled by the Pacers in Indiana and the Toronto Raptors—returning Rudy Gay and all—at FedExForum on Wednesday night, is better than they deserve to be. There have been a lot of games that haven't been very close, and there have been a lot of people booing the Grizzlies as they wrap up another 3rd quarter trailing by 20 (and, honestly, one can see their point), and a lot of crowds streaming out of FedExForum early because the Grizzlies are down big and not going to mount a comeback. The team, meanwhile, has looked good in one game (the win over Golden State) and bad in every other one, whether it's the starting five wandering around listlessly, out of position, bricking jumpers, or it's the all-bench lineups we've seen a little too much of, running down the court and passing the ball to a season ticket holder in the third row. They toughed out an overtime win over the Detroit Pistons, they managed to beat the Boston Celtics after trailing, and they came out, played an 8-man playoff rotation, and put the screws to the Golden State Warriors, who were on a SEGABABA and who are also just plain old bad at beating the Grizzlies because of matchups.

That's a really long paragraph that actually doesn't say much. Truth is, I have no idea why the Grizzlies are playing so poorly, and neither does anyone else, not really. Sure, you can point to specific things—turnovers—and specific players—Marc Gasol—and you can say it's the fault of the coach—and he's certainly not blameless—or the fault of the front office, who messed with the formula for the Grizzlies' success by replacing Lionel Hollins with Dave Joerger. But not of those, in isolation, is the problem.

And so here we are. Watching a 3-5 basketball team that can't hang on to the ball and doesn't look much like they care, with a coach who thinks he can play a 12-man rotation, in a town full of people who just want to know why it can't be the way it was.

Nothing can ever be the way it was. Heraclitus said that, not me. Do I think there's a segment of Grizzlies "fans" who are a little excited by the Grizzlies' struggles, because they thought the front office was stupid for getting rid of Hollins? Yep. Are those people going to be able to fix this now, and does their Internet outrage make anything any different? Nope.

This is the team we have now, and this is the coach we have now, and the window on this team is closing, and closing quickly. You could make the argument that the time for this group of Grizzlies to win a championship has already passed, and you wouldn't be crazy. I don't agree with you, but it's a sound argument. At any rate, that's what they need to realize, and why they need to be playing hard. Because this might be the last shot they get. Tony Allen, Zach Randolph, Tayshaun Prince, and Mike Miller are not going to get younger. They're in a position to contend right now. Marc Gasol is in the prime of his career—a prime that he will never get back. Mike Conley is still improving, but he will never get this season back. These Grizzlies are wasting time out of their short lives and shorter careers, jacking up jumpers and failing to rotate on defense and then sitting around in the locker room complaining about how they don't know what's wrong like they didn't just sit out there and watch themselves get seal-clubbed by a crappy Eastern Conference team.

Obviously Dave Joerger is not innocent in all of this. The lineups and rotations haven't made any sense yet. You can't go through an NBA season with an 8-man playoff rotation, but you also can't just keep throwing guys off the bench into lineups that haven't ever played together before when you're down because you're "looking for a spark." Be more intentional about substitutions. Find the guys who are going to play hard and play well and play them. Just because there are 12 guys on the team who can play minutes doesn't mean all 12 of them should play minutes.

I don't know what the problem is here, behind closed doors. I don't know whether it's a trust issue among the players on defense—that's what Tony Allen said it was after Wednesday night's loss—or if the team doesn't buy into what the coach is doing—that's what several media members were saying after Wednesday night's loss—or if all of the Grizzlies' veteran players simultaneously got too old at the same time—which has been floating around the NBA blogosphere for a little while now. It's probably a little bit of all of those things. 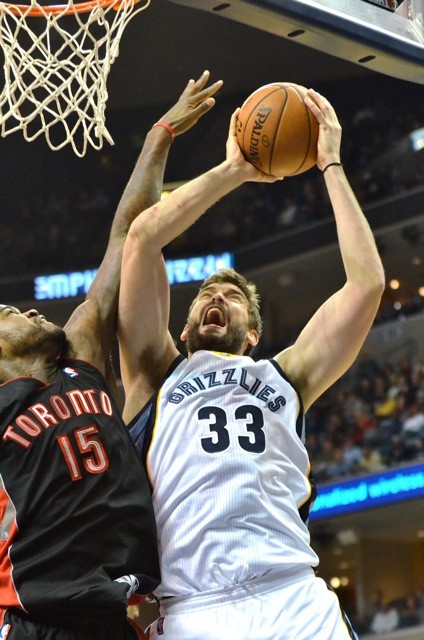 What I fear is a lost season. I'm not panicking yet, and I'm not ready to say pull the plug on this season and retool for next year, but I'm starting to study the maps for how to get there. Bring on the chaos, the change, the churn. Anything is better than watching the Grit And Grind Grizzlies go out and get their heads beaten in by bad basketball teams. I'd rather sit there and be like Philadelphia and watch Tony Wroten (gee, remember him?) rack up triple doubles on a team designed to lose as many games as possible than watch the Marc Gasol/Mike Conley pick and roll get beaten by 20 by Rudy Gay and DeMar DeRozan, who are like J.R. Smith without the field goal percentage or the MDMA usage. We're not there yet, but don't kid yourself: that is one of the possible outcomes here.

Which brings me to the road trip that starts tomorrow. I'm not looking for the Grizzlies to go 4-0 or 3-1 on this road trip that takes them through four games in six nights (that's a FOGASINI, for those of you playing along at home) at the Lakers, Kings, Clippers, and Warriors. 3-1 would leave the team at 6-6 coming home, which feels like a bit much to ask at this point. I'd settle for 1-3 and a team that looks like it gives a crap about whether they win or lose basketball games, and that doesn't get down big to a crappy team, spend a lot of energy to get caught back up, and then get blown out again (which seems to be the emergent pattern so far in the 2013-14 season).

Friday night's game is at the L.A. Lakers, led by former Grizzly and Lionel Hollins favorite (he started in front of Tony Allen for longer than anyone but Hollins was comfortable with) Xavier Henry and former Grizzly—and what do we think of Pau now? Are we still mad at him?—Pau Gasol and a bunch of nobodies who are somehow 4-6 instead of 1-9. It'd be a great time for the Grizzlies to get back on track, and try to find some sort of an identity, but for that to happen, the groups of players on the floor are going to have to find some sort of cohesion, and they're also going to have to be left on the floor long enough to do so. So far this season we've seen neither.

With any luck, the Grizzlies will win that one, that momentum will carry over into Sunday evening's game against the Sacramento Kings, and from there it won't much matter whether the Grizzlies beat the Clippers and Warriors before they head home so long as they look better. I'm still very much a believer in process over results this early in the season—and the Grizzlies look like they've yet to develop a process.

They'd better find one, quick, because you can't step into the same river twice, and if they're not careful, the Grizzlies are going to sink in this year's Western Conference before they've ever had a chance to compete.