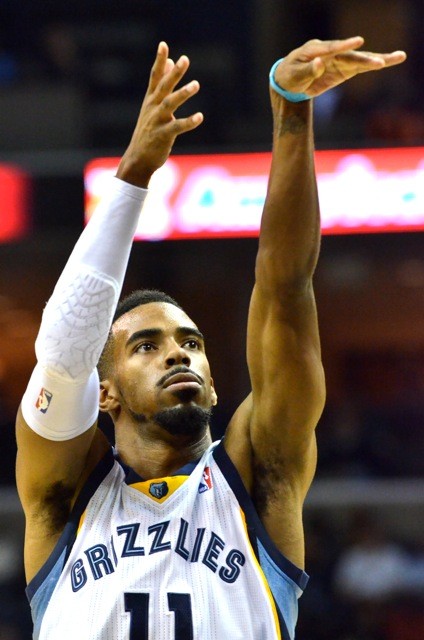 If I'm honest, that wasn't the outcome I expected last night: the Grizzlies went into Los Angeles and defeated the much-hated Clippers pretty much from beginning to end, and they did it without Tony Allen for most of the game. The Grizzlies were able to exploit mismatches against the Clippers' frontcourt as Zach Randolph, Marc Gasol, and Kosta Koufos—the only bigs who played any time for the Grizzlies—combined for 59 points and 33 rebounds. It was a solid road win for the Grizzlies, who are now 3-0 on their West Coast road trip, with 4-0 very much in play, as they face the Golden State Warriors again on Wednesday at Oracle Arena. Herewith, some thoughts:

Zach Randolph has been great. In all three games on the road trip so far, both Zach Randolph and Marc Gasol have put up really good numbers—and Gasol has gotten more engaged and more "Marc Gasol-like" as the trip has gone on—but the star of the show, even when there are other players (Gasol and Conley) contributing just as much to the Grizzlies' success, is Z-Bo. He was in top form again Monday night in Los Angeles, putting up 26-15 (along with 2 blocks and 2 steals). Even though the Clippers began the game doubling him every time he touched the ball, he still put up 13 points and 6 rebounds in the first quarter.

When Randolph is playing at this level, the rest of the team can breathe a little easier, and everything goes better. Whether this is just some sort of phase or whether this is really the level Z-Bo is going to be operating at this year remains to be seen, but either way, Randolph's play has been a pleasant surprise so far this year. I'm willing to admit publicly that I wasn't sure he had these kinds of numbers in him on a nightly basis this season.

Marc Gasol looks like he's finally starting to get back in the swing of things, after spending much of the opening weeks of the season walking around in a Eurobasket-and-paella induced coma. Gasol's return to form couldn't have come at a better time for the Grizzlies, as his defense has started to round back into form after an abysmal start that saw him (1) out of position all the time and (2) seemingly not worried about it. At the same time, Gasol has started to be more aggressive on offense—especially when it's clear that he has a mismatch, as was the case last night when he was being guarded by Byron Mullens—and his set shot from the elbow, though it hasn't falling at the rate it did last year, has finally started to look right, and will surely start dropping soon if he keeps taking them.

In all three of the games on this road swing so far, Gasol has flirted with a triple-double, putting up 18-8-8 against the Lakers, 19-8-9 against the Kings, and 23-9-8 against the Clippers last night. Suffice it to say, when Z-Bo is averaging 25.3 and 12 on a road trip, and Gasol is averaging 20-8-8, the Grizzlies are doing just fine, thank you very much. I wouldn't be surprised if Gasol ends up with at least one triple-double this year; he'd be the first Grizzly to do it since his brother Pau.

Kosta Koufos had a very, very good game against the Clippers last night. Joerger seems to have settled on a frontcourt rotation of Gasol, Randolph, and Koufos for the moment—which works, but probably not all season with Gasol playing 40 minutes—and Koufos' skillset pairs excellently with either player. Koufos played 18 minutes against L.A. and racked up 10 points, 9 rebounds, 2 assists, 2 steals, and 4 blocks, and shot 100% from the floor. When he's playing at this level, I'd love to see Koufos get more on the order of 25-28 minutes so Marc Gasol can reduce his minute load to something more like 32 per game instead of 40. Keeping Gasol and Randolph fresh all season long was a major reason for acquiring Koufos in the first place.

Mike Conley is playing the best basketball of his career right now, and he's played some good basketball before. Seriously, his game is at a whole new level this year, and it's a beautiful thing to watch. The Grizzlies' ball movement, in general, has been absolutely beautiful on this road trip, reminding me of some Spurs teams in the past. Just breathtaking basketball, and Conley is the only one who has been playing this well from the beginning of the season.

...not the smartest defensive move Tony's ever made. It didn't appear to be intentional—my assumption is that Allen expected Paul to pass, jumped to block the pass, and then was surprised when Paul started to drive, at which point it was too late to stop whatever karate move he was doing there—but it was ruled a flagrant-2 nonetheless, and Allen was sent to the locker room early. (And honestly, while I don't endorse kicking Chris Paul in the face, once I saw that Paul wasn't injured, I didn't really feel too bad about it.)

The Grizzlies managed to do a good job defending anyway, even when Mike Conley picked up his third foul while it was still the second quarter. A lot of that was Quincy Pondexter, who didn't put up great numbers, but still stepped up alongside Jerryd Bayless to take on one of the tougher assignments around.

Who didn't play was just as telling as who did: Ed Davis racked up another DNP-CD. I understand why—the Z-Bo/Gasol/Koufos trio has been absolutely unstoppable the last three games, and the Grizzlies desperately needed to get something like that going so they could start to cohere as a team—but I can't fight the feeling that Davis is going to have to play some, if only to reduce the minute load on the other three bigs. One hopes that not playing on this trip will be a motivator for him rather than just making him mad, but that remains to be seen. If he's going to insert himself in this rotation, he's clearly going to have to be better.

There were lots of other things going on in this game—Tayshaun Prince being mostly a disaster on offense but playing excellent defense on J.J. Redick, for one thing (Redick shot 3-13 from the field and 1-7 from 3, which... isn't very good)—but those are the highlights.

As I said in the beginning of this piece, 4-0 on this road trip is very much in play given that the Warriors are a very favorable matchup for the Grizzlies—they were a good matchup when the Grizzlies were playing terrible ball, so it stands to reason that the way the Grizzlies' Big Three (Conley/Gasol/Randolph) are playing, the matchup is only that much more favorable.

As it stands, the Grizzlies are 6-5, and there's no way they're going to return home below .500, which seemed unthinkable just last week, when everyone—including me, I'll be the first to admit it—was worried that this Grizzlies team had problems that were going to take a long time to address. It looks like they're starting to come around, and it couldn't have come at a better time.