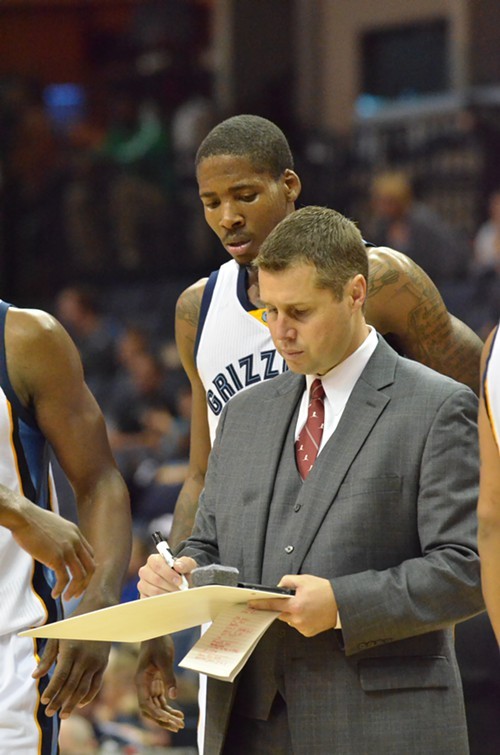 You want to know what Colonel Kurtz sees at the end of Apocalypse Now when he utters those words? Highlights of last night's Grizzlies-Bulls game at FedExForum. The Grizzlies were missing Marc Gasol (and Quincy Pondexter) and the Bulls were missing Derrick Rose and Luol Deng, and as a result they played a disjointed, ugly game of runs in which the Grizzlies took more field goal attempts than the Bulls, didn't make a single 3-pointer, and only scored six points in the first eight minutes of the third quarter.

I'm not really willing to blame the ugliness of this game—especially on the Grizzlies' end—on the injuries. The Grizzlies just played a game Saturday night where they hung 120 on the Denver Nuggets and did it while looking pretty comfortable on offense. Part of last night's problems were caused by the Bulls' defense. The other part was this putrid Grizzlies offense that pops up from time to time this season, incapable of doing anything.

Watching the game last night (and I watched from home, instead of from my usual spot at the Arena Formerly Known As The Grindhouse) was incredibly frustrating to me. Jerryd Bayless is going to play backup point guard that badly, and coach Dave Joerger still isn't going to just put Nick Calathes out there? What was he going to do, turn the ball over 20 times? The Bulls concentrated a lot of defensive effort on not letting Mike Miller do anything. As a result (and also because he only attempted one 3 and it didn't go in) he ended the night with 2 points and 2 assists in 16 minutes. Jon "Jonny Basketball" Leuer didn't play in the second half because of back spasms—and I was almost relieved to hear that he wasn't 100%, because he played the first half like he'd had one of his feet amputated at shootaround.

It was a bad loss. No way around that. The Grizzlies should've beaten the Bulls last night, and they didn't.

One Thing I Liked

There was only one redeeming factor last night: Mike Conley. Conley played 36 minutes—including almost all of the second half—and did his best to will the Grizzlies to a win, just like he's had to do all year long. He ended up with 26 points, 6 rebounds, 9 assists, and 6 steals, and he got drilled every time he went to the rim, sometimes without anything being called. And yet he just kept on going. Conley's heroic effort, especially in light of how much he's struggled since returning from injury, was wasted last night because the rest of the team couldn't match his effort, his intensity, or his heart. And that's a bummer.

Mike Conley has been the best player on the team all year long, and it's not even close. It's a shame that he's having such a great year because no one else around him can or will. He deserves better than that.

• When can we start talking about Tony Allen's Trick-to-Treat ratio this season? Every previous year, the rap on Tony was that he's a brilliant defender and a terrible offensive player. This year, he's scoring on cuts to the basket, he's jacking up terrible three-pointers (presumably because he made 3 of them in the season opener against the Spurs, but since then he's only made 2 others), he's trying to do too much on offense and he's helping off everybody who isn't an All Star level player, allowing spot-up guys and scrubs to have huge games against the Grizzlies. I don't know what the deal is—and I'm certainly not questioning his effort, just his effectiveness—but the Grizzlies need the Tony Allen of last season to come back. This year's model has looked off to me. (While we're ranting about Tony Allen, can the Grizzlies stop running that play where they kick out to TA in the corner for three? Please?)

• In their last five losses, the Grizzlies have made 4, 16, 20, 22, and 13 more field goal attempts than their opponent, respectively. Sure, some of those are Z-Bounds that don't go in, which inflate both the OREB and FGA numbers, but still: if you take 22 more shots than your opponent and lose by ten points, something is horrifically wrong with your shooting percentage. The Grizzlies rank 24th of 30 teams in eFG% this season.

• Minor lineup quibble of the night: Why play a small lineup with Conley and Bayless, Tony Allen at the 3 and James Johnson at the 4 against Carlos Boozer and Taj Gibson, even after those two repeatedly score by going inside against your small lineup? Why?

• "Whoop That Trick" will no longer be played at home games at the Forum this season. Officially. It's been ruled ineligible because the Grizzlies aren't, well, whooping anybody at home this year. I wish I were making that up, but that nugget comes straight from the Grizzlies Game Ops folks.