Road Recap: Grizzlies 99, Suns 91: Back from the Brink 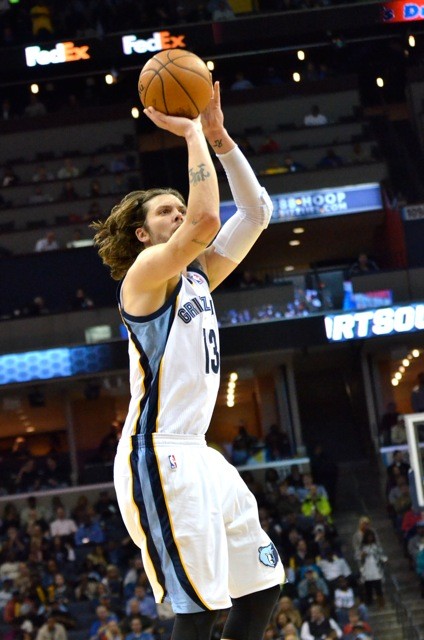 At some point during the third quarter of last night's game, in which the Grizzlies were outscored 32-16 and saw a 53-41 halftime lead turn into a 73-69 deficit, I'm sure I wasn't the only one who thought, "Well, there goes this game." Everything was going wrong for the Grizzlies: the guys on the floor were barely registering a pulse, they probably shouldn't have been on the floor together to begin with, and nothing they tried did anything to slow the Suns' assault.

It was the same place the Grizzlies have been numerous times this season: a strong opening effort, torpedoed by a terrible quarter, never to be recovered.

But that's not what happened last night. Last night, partly because Dave Joerger stuck with the lineups that were working instead of the miserable starting lineup, and partly because they refused to lose and re-found the rhythm they'd been in in the second quarter.

For that reason, I think last night's win ranks among one of the best of the season. The Suns have been playing very well as of late, and the Grizzlies hardly ever win in Phoenix. On the first game of a road back-to-back, it would've been easy for the Grizzlies to throw in the towel when the Suns came charging back on a huge run in the third quarter, but that wasn't how it went. They fought back, the bench came up big, and the Grizzlies won.

• The bench was magnificent last night, no two ways about it. Ed Davis, James Johnson, and Jerryd Bayless played very well in long stretches of the second and fourth quarters. When Joerger decided to stick with the guys who were playing well—and Ed Davis, especially, appears to be a matchup nightmare for Phoenix—the Grizzlies were unstoppable, putting up two 30-point quarters in the second and fourth. The Grizzlies' bench outscored the Suns' bench 54-15. A great showing from the reserves.

• Beating the Suns last night means that the Grizzlies won the tougher of the two games of this road back-to-back. Denver is a team that is reeling at the moment—Andre Miller's suspension for "conduct detrimental to the team" is only the latest in a long line of bad turns for their season—and the Grizzlies handled them fairly easily when they played last week. Now the pressure is off tonight, and hopefully that means the Grizzlies will play within themselves and not take the night off.

• Mike Miller returned from the dead. After a season of rough games punctuated by bright spots, it's good to see Miller effective, even if he was 0-1 from three. 11 points on 4-7 shooting, 7 rebounds, and 4 assists, which really helped the Grizzlies in their effort to climb back on top.

• Tony Allen was pretty bad. He ended up only playing 12:38, most of that in the first half. He wasn't doing much on offense, not even his usual timely cuts to the basket, and on defense, the Suns managed to get off 11 three pointers in the first half (of which only two went in, but that would change in the third quarter). I said something in the Bulls recap about Allen's lackluster play, but last night was probably the worst he's been. I'd love to know what's going on there, because Allen is an important piece of the Grizzlies' puzzle, and they need him to be playing well. If he's not going to perform up to his usual standards, that four-year deal is going to turn sour in a hurry.

• Rotations are still an issue. Joerger continues to play the starting lineup to start the third quarter of games, and ride them much longer than he has to. The trend is for the starters to play at least the first half of the third quarter, which sometimes enables the Grizzlies to make a run, and sometimes sinks them. And, speaking of the starters...

• ...the starting lineup, without Marc Gasol, just isn't working. The starters weren't good this season even with Gasol, at least not until the "4-0 West Coast road trip" we keep talking about like it was some sort of beautiful dream we all had together that dissipated when we woke up to our injured-Gasol reality. It's hard to pinpoint where the problem is. Certainly a lack of production at the wing spots (Tony Allen and Tayshaun Prince) plays into it. The differences in the way that Gasol and Kosta Koufos play is also a factor. But whatever the reason, the starters are a problem for the Grizzlies, and I understand Joerger not wanting to bench a veteran guy like Prince, but... something has to give. I think it's got to be the starting lineup.