The Playoff Picture: What has to happen for the Griz to get in

With last night's win over the Bucks (I've only watched the first half so far—the rest is still waiting for me on my DVR, so I won't really comment on that game until I've watched it all the way through) the Grizzlies are back up to .500 for the first time since December 9th. It seems like this is a good moment to pause for a second, look at the Western Conference playoff standings, and look at what has to happen for the Grizzlies to sneak into the playoffs as a 7 or 8 seed—an outcome that few would have believed even two weeks ago.

First things first: here are the standings as of this morning:

Last night's Grizzlies win and Timberwolves loss moved the Grizzlies to 10th and the Wolves to 11th, where they were previously tied. The Grizzlies and Wolves play each other three more times, once at home and twice in Minnesota, and every one of those games will be crucial to creating separation between the two in the standings. The Grizzlies lost the first matchup in Memphis in December, so winning out the season series and grabbing the tie-breaker could be a difference maker.

But that only gets the Grizzlies from 11th to 10th. What about the other teams in this "third tier" of West teams, the Nuggets, Mavericks, and Suns?

Some of this was covered expertly by Aaron McGuire of Gothic Ginobili yesterday in a post about how good Mike Conley has been this season. You should stop reading this post, go read that one, and then come back enlightened and uplifted. You did that? Okay. To summarize: the Grizzlies played a really tough schedule to open the season, and they're going to reap the rewards of that by having a February and March wherein they play lots of Eastern Conference teams. They'll be playing more road games and more back-to-backs, but generally the competition is a little bit lighter through this stretch of the season.

In March, it's the Cavaliers again, the Wizards again, the Bobcats again, the Raptors, the 76ers, the Jazz twice, and the Nuggets, who are either terrible or a nightmare matchup depending on what day of the week it is. Sure, there are tough games mixed in there—at Oklahoma City, a couple against the Trail Blazers, the Heat, a home game against the Clippers—but the point is the same: there are plenty of opportunities for the Grizzlies to improve their record. They won't win them all, but with that many games against poopy Eastern Conference teams, they should be able to maintain a firm grasp on a .500-or-better record.

As for the Mavericks, no one I've talked to seems to think they're going to be able to continue to win at their current rate. They've clobbered the Grizzlies twice now, and they'll play two more times before the end of the season, so there's already no way for the Grizzlies to win the season series with them. But they're an old team, with a shaky-at-best defense, and they Grizzlies' two losses came in the Bad Old Days before the team was playing well. 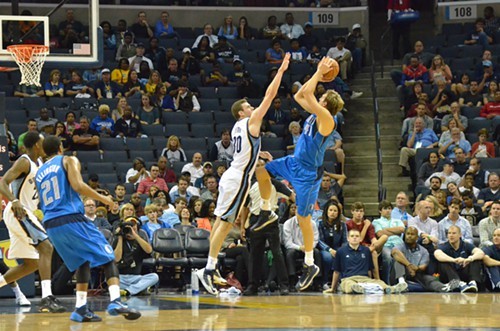 But even if the Mavericks can hang on for dear life, it seems unlikely that the Suns will. Perhaps the most surprising team in the West this year, the Suns played great basketball at the beginning of the year, until losing athletic monster and beast of a point guard Eric Bledsoe to a knee injury. As it stands, the Grizzlies have played them three times and beaten them all three, and don't play them again until April 14th. Without Bledsoe, it's hard to see them clinging to a winning record and the 8th seed, especially since their remaining schedule has them playing more top-tier teams from both conferences than the Grizzlies will be playing.

So Minnesota, Phoenix, and Dallas are accounted for. What about Denver?

It's hard to figure them out. They're frantically looking for a home for church league MVP Andre Miller (whom some have said would be a great fit on the Grizzlies, but I don't see it, personally) and they're still missing several guys to injuries. How they've been able to stay afloat is mostly a mystery. Likewise, it's hard to figure how they'll perform the rest of the season. They lost 8 in a row before beating the Grizzlies, since which victory they've won 6 out of 7. For the rest of the season they're kind of playing an even mix of East and West teams, but the West part of the schedule sure seems to say "Spurs" and "Trail Blazers" and "Rockets" a lot.

So Denver is the question mark. Which means those two games on 3/31 and 4/4 are going to be critical to the Grizzlies' playoff positioning, especially if the two teams are still close in the standings by that point—which I suspect they will be.

The standings are going to get more crowded before they start to separate again. I think the Grizzlies will move up, but overall the whole 7-11 spots are going to tighten as teams start to settle in before the trade deadline and the stretch run through to the end of the season. If the Grizzlies can put together a strong run now that Gasol is back and the Johnson/Lee/Davis trio seems to be firing on all cylinders—and don't you know Zach Randolph is glad someone is finally on the court with him to draw away the other team's best post defender—Memphis is going to make life difficult for someone.

And then... remember the last time the Grizzlies made a furious push in March and April to get to the eighth seed? 2011? I think this Griz squad, like that one, is a team that no one wants to face in the first round, especially teams not wearing black and silver uniforms. But even those guys would probably rather play Phoenix.