Whatever That Was, I'm Glad It Wasn't My Fault 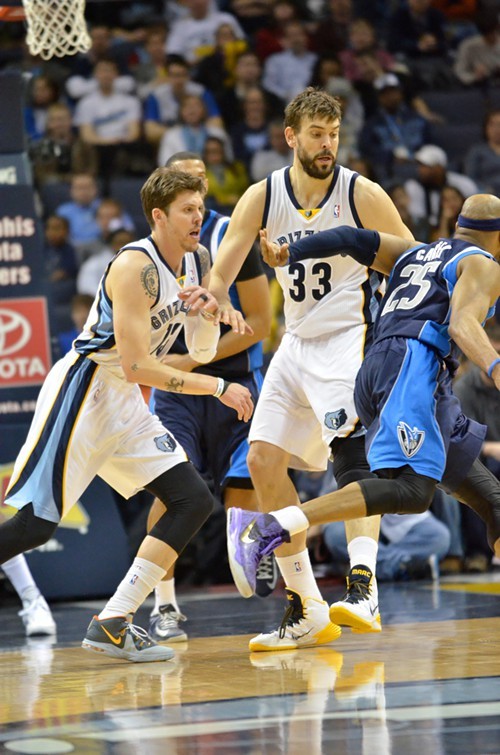 Eventually you run out of ways to talk about games like this.

The players don't help, because no matter how far off the rails the game gets, no matter how bad things go for them, this group of Grizzlies doesn't go "off message" enough to give you any insight into what it's like to be out there on the court while everything you do fails, everything falls apart, and Rick Carlisle barbecues your defensive schemes and then serves them to you with a side of Monta Ellis, and then suddenly a game that was really important to the playoff race is in the rearview mirror and you lost by fourteen points.

They don't really give any insight into what happened, because that's not what the media gets to hear. Instead, and from a management standpoint it's a good quality of this group of players and not a bad one I guess, though it makes for less interesting recaps, they all say the "right" thing. Marc Gasol says "You win, you move on, and when you lose, you move on." Zach Randolph talks about how every game is important, every game is a battle, etc. Nick Calathes talks about how he turned the ball over too many times. In the postgame press conference, Dave Joerger says the loss was his fault because he didn't have the team prepared to face Dallas' intricate pick and roll schemes, and so Dallas carved up the Grizzlies' defense (which, yes, that happened).

It doesn't feel like the whole story, though. Dallas may have been doing things offensively that the Griz weren't ready to defend, but when Brandan Wright catches a pass at the free throw line and runs completely unchecked down the middle of the lane for a lay-in, while two Grizzlies are at the elbows and two Grizzlies are on either block (like they were running a box-and-one that was glued to the ground), and then after the dunk Jon Leuer and Marc Gasol just stare at each other...

Grizzlies home games this year are a crapshoot so far. I've been to 20 of them, and of the 20 that I've been to, half of them have been losses, and many of those losses have been lopsided. Sometimes the Grizzlies come out and look like world-beaters, defending well, putting up huge offensive numbers, playing with attitude (I'm not going to say "grit" because we've all been saying it ad nauseam since 2010 and I'm tired of it, but if I were going to say "grit" this is where I would say it). On other nights, they have nine players in uniform and you get handed a starting lineup sheet that says

and even though Zach Randolph ends up starting it still feels like an unavoidable disaster, the split second after you slam on the brakes when you realize that your car just isn't going to stop in time, and you have to start thinking about how you're going to make it through whatever impact is on the other end.

This wasn't supposed to be one of those games. This was supposed to be the Grizzlies bouncing back from a tough, slow, ugly loss at Oklahoma City by asserting their will on the Mavericks, who have a great offense and no defense, playing tough without Mike Conley and hanging in there and Tony Allen cheerleading from the bench (which seems to be his role this season) and Grit and Grind and whatever. Instead, for one, Joerger got out-coached by Rick Carlisle. No shame in that; it happens sometimes. "One of those nights." Marc Gasol was terrible, not making anything, not making the right decisions, and if it weren't for the knee injury I'd say he's relapsed to the Space Cadet Marc of the first two or three weeks of the season. You know, when they got beaten at home by the Raptors by 20 points.

I don't know what else to say. The only games I get to go to are home games, and it seems like Russian roulette (though nothing like whatever is happening in Sochi) every time—it could be a great game, or it could look like every guy on the team would rather be at home reading back through The Recognitions and/or drinking and playing FIFA on the Xbox. Last night against the Mavericks was one of those Book Club nights, and the sooner we forget the whole thing happened, the better.

Except it's not going to be possible to forget it, not soon: the Mavericks were a half game ahead of the Grizzlies before last night's game, barely clinging to the 8th playoff spot despite a great run of play from the Grizzlies. Now they're a solid two games ahead, and Denver is only a game and a half back from pushing the Grizzlies down to 10th. I still think the Grizzlies will end up in the 8th spot, but what do I know? I also expect them to come out and look like they know what they're doing on a nightly basis, instead of getting schemed into oblivion by Dirk Nowitzki and letting Brandan Wright finish with an offensive rating of 165 and Jae Crowder play 9:47 and leave with an offensive rating of 200. As in 200 points per 100 possessions. As in scoring a two-point basket on literally every single possession out of 100.

Bottom line: if there are too many of these, the Grizzlies aren't going to the playoffs, just like we were all scared they wouldn't back in December when they lost three hundred games in a row while every other guy on the roster was in a body cast. So with any luck, this was just a bad night, against a team that had prepared better, and it was mostly because Mike Conley didn't play. But it didn't feel that way. It didn't feel like the Grizzlies showed up for the second half, or if they did, they quickly took one punch to the jaw and ran away from the fight. "One game at a time," and all, but man, am I tired of watching these kinds of losses.