The Splendor of Chaos: An Evening at the Grindhouse 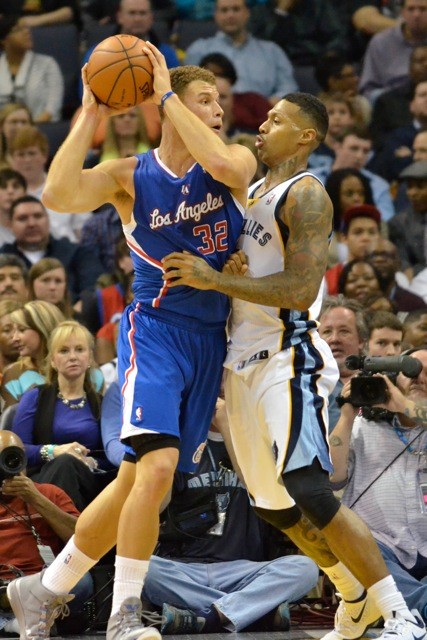 It's been a while since we could refer to FedExForum as "The Grindhouse" and mean it. The Grizzlies have struggled at home this year—especially early in the season when things were falling apart.

Last night, though... last night was a return to form. Last night was church, with Tony Allen and James Johnson giving the sermon.

First things first: it was James Johnson neck tattoo giveaway night at the Forum last night, and don't think for a second that James Johnson didn't know it. In 17 minutes, Johnson had 15 points, 4 rebounds, 3 assists, and one of the most vicious blocks I've seen in a while—spiking a Willie Green layup straight into the foul line—but the stat line, while impressive, isn't what mattered.

What mattered was this:

In one of the craziest things I've ever seen in person—and the type of play that happens in All Star games but almost never in real NBA competition, that Johnson dunk off the backboard almost brought the roof down around us all. I was sitting next to Chris Herrington at the table last night, and we just looked at each other and laughed. There was no other appropriate reaction. James Johnson, in one move, made himself even more of a Grizzly legend than he already was.

It didn't hurt that Johnson augmented his black-belt level game (including pointing to his neck tattoo as he ran back down the court after one score) by playing some of the best defense on Blake Griffin (yes, JJ was a power forward for a while last night) that any Grizzly has played in recent memory. A lineup of Mike Conley, Courtney Lee, Tony Allen, James Johnson, and Zach Randolph took the swarming defense and bullying interior offense and cranked it up to Spinal Tap levels, and it was joyous. The Forum was rocking. The crowd was getting into it. The Clippers were clearly getting frustrated by their inability to stem the Grizzly tide.

Meanwhile, the other crucial question was answered: would Tony Allen be worth anything when he finally returned from injury?

The answer, of course, was yes. After coming in with 2.1 seconds left in the first quarter to the loudest ovation I've heard in the building since Zach Randolph skipped into the tunnel after he got tossed in Game 6 last year. He proceeded to destroy everything in his path, terrorizing the Clippers' guards, stealing the ball every opportunity he got (and blocking a last-second three into oblivion), sinking a three-pointer as the shot clock expired...

...in short, Tony Allen came out onto the court for the first time in weeks and immediately started doing Tony Allen things. He did them coming off the bench, but he still played almost 20 minutes—and sometimes, it's not about who starts the game, but who finishes it.

Last night was the kind of night the Grizzlies haven't had in a while, not like that. The Clippers rivalry is a real thing, no doubt. These two teams don't like each other. The Clippers seem to bring out a darkness in the Griz home crowd—a level of vitriol that sometimes feels like it isn't commensurate to what's happening on the court. The Grindhouse only feels like that—like a giant riot about to break out, a brooding, threatening energy rippling through 18,000 people, like everyone's just waiting for the cue to start throwing chairs and lighting things on fire like Berliners at a Bill Haley and the Comets show—when Chris Paul and Blake Griffin and The Whole Sick Crew are out there. It's a glorious thing, and it's that edge, that heart of darkness, that sets Memphis apart as an NBA city to me. The crowd only taps into it when they have to, but when it's more like Wrestlemania than a Tigers game, that's when the FedExForum really becomes the Grindhouse.