Four in Five: A Grizzly Week Ahead 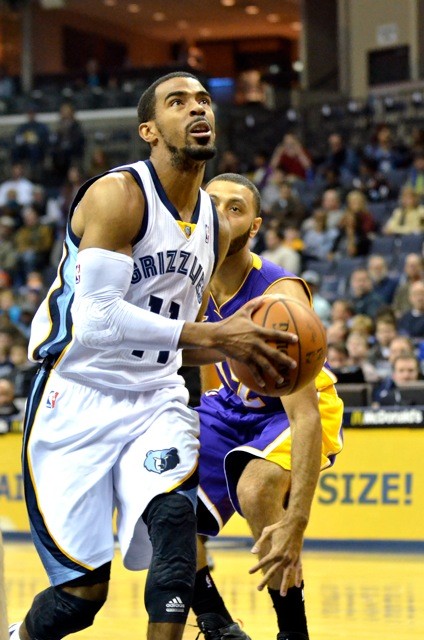 The Grizzlies have an interesting week ahead of them: a four-game-in-five-night voyage (or, you know, a FOGAFINI) through two playoff teams and two lottery teams with some interesting implications. The post-All Star schedule for the Grizzlies is loaded with back-to-backs and road games, and this week is no exception.

Now that they've managed to land in the West's #8 spot for the time being (with an identical record to Phoenix but holding the tiebreaker) a game behind Dallas for the #7 spot, this week's slate of games becomes an opportunity to solidify that position while Phoenix has to play the Clippers. (Also the Cavs and Celtics, but I'm going to assume they'll win those two.)

Tomorrow night, the Portland Trail Blazers are in town. Since starting out with the best record in the West, the Blazers have come back to Earth a little bit, including a loss to the Grizzlies in Portland that at 98-81 felt like even more of a blowout than it really was.

Fact of the matter that Portland is a dangerous team, but the Grizzlies match up well with them. They lack the interior defense to keep Gasol and Randolph from destroying everything in their respective paths, and Gasol is returning to a form which will enable him to play better defense on LaMarcus Aldridge than in the teams' previous meeting.

Overall, the Grizzlies absolutely killed Portland the last time these two teams played, and I'd argue that the current Grizzlies are an even better team. It's not a definite win—nothing ever is, not in the NBA (see also the Nets game)—but one has to feel good about the Grizzlies' chances at home against a team they've beaten convincingly before.

I asked Z-Bo about this game, and this is what he said:

This one is going to be tougher. The Grizzlies haven't beaten the Pelicans yet this year, and there's one very large prominently-eyebrowed reason for that: Anthony Davis is only one guy, but he's exactly the guy you'd draft for your team if your goal was to blow up everything that the Memphis Grizzlies attempt to do on offense. The Pelicans have handed the Grizzlies three losses this year.

Tony Allen might be able to contain Tyreke Evans better than Tayshaun Prince could—that is, he might be able to do something besides stand there while Evans drives past him to the rim—but that's not going to keep Anthony Davis from swatting everything that comes his way, preventing the interior high-low game from ever getting off the ground, hitting shots he doesn't look like he should hit, somehow tricking Marc Gasol into thinking Gasol can make a pass over Davis' head (Spoiler Alert: he's tried this a dozen times this year. He can't.) or a myriad other problems.

By the same token, other than the teams' first meeting in November (the Dark Ages of this season when everything was falling apart even though nobody was hurt) this is the first time they've played the Pelicans when they're at full strength. I like the Grizzlies' chances, but I also wouldn't be surprised if the Grizzlies drop this game and the Pelicans sweep the season series. As much as that would be problematic, it wouldn't surprise me. I'm not sure what that says; it could be that the Grizzlies have underperformed against divisional teams to the extent that I temper my expectations, or it could be that I like to prepare for the worst so I'm pleasantly surprised when good things.

Either way, this is an important game that has the potential to go badly.

The We Traded Rudy Gay Grudge Match of the Century.

Seriously, though, Toronto has been playing really well as of late—and you best believe Tony Allen still remembers that Rudy Gay called DeMar DeRozan "the best 2-guard I ever played with" and is determined to make DeRozan look bad.

This is another one of those "this should be pretty straightforward" games that it's hard to write about because the Raptors are a good team. They've certainly improved since GM Masai Ujiri relieved himself of his Black Hole Small Forward problem (which turned out to be the best outcome for both parties involved) and Kyle "He (Lionel) Hate Me" Lowry is a confirmed Griz Killer. Also, prepare for some sweet Vasquez-on-Calathes action.

Teams always seem to have weird games in Toronto, too. Like Canada has some sort of weird force field that causes road teams to play badly, basketball affected by currency exchange or something. If they can overcome that, and the dead legs of a third game in four nights, this is a game that the Grizzlies should win.

In the Grizzlies' favor: Sixers fans are buying tanking-related t-shirts that look like this (found here):

In the Sixers' favor: If anyone has the potential to go All Time Griz Killer and score four thousand points doing ridiculous things while sprinting down the court turning every possession into a fast break, isn't it our dearly departed Tony Wroten?

All in all, this has the potential to be a 3-1 week. Really, it could be a 4-0 week, but my guess is that fatigue will come into play for one of these games—it could even be the Sixers game, as the Sixers play with the league's fastest pace and the Grizzlies will be on the last game of the FOGAFINI by that point and longing to go home and sleep. It's a week in which the Grizzlies can do a lot for their own playoff positioning.