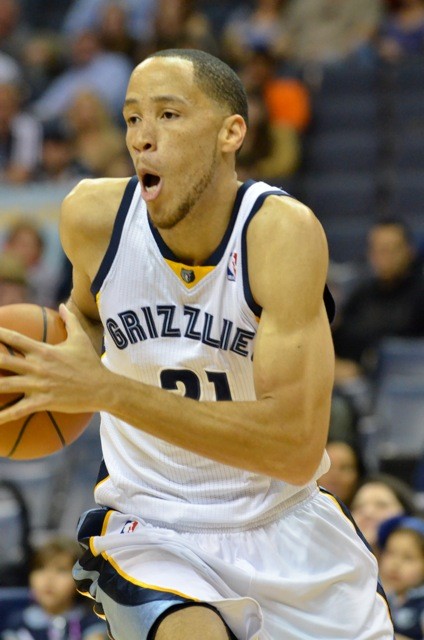 About that Pelicans Game

I'm not going to belabor this point, because I feel like I've been screaming and yelling about it for months now, but Wednesday night's game against the Pelicans was much closer than it needed to be, and the lineups being played (especially during the second and third quarters) had a lot to do with that.

I get that head coach Dave Joerger is trying to trim down the rotations of a way-deep team as the season winds down and the team makes its final playoff push. This is a team capable of going 12-deep from time to time, and a Hubie Brown-style 10-man rotation wouldn't be out of the question. Beyond the (current) starting five, Nick Calathes, Mike Miller, Tony Allen, James Johnson, Kosta Koufos, and Jon Leuer have all earned playing time (and you could make the case for Ed Davis, too, although he needs more minutes to get going than the others, which greatly limits his effectiveness as the "spot minutes" guy Joerger & Co. apparently feel he is).

But that third quarter? You know, where almost the entire quarter was played out by the starting lineup of Conley-Lee-Prince-Randolph-Gasol, save for the Miller-for-Gasol swap that happened at the 4:27 mark?

I still don't get it.

I've never seen a rulebook that says the exact same guys who started the game have to (1) start the second half too, no matter what the matchups are and (2) have to play in the third quarter until they're so tired they can't do anything but walk up and down the court. I especially don't understand why you would make your best guys so worn out on the second game of a back to back, when they're not really closing the gap between the Grizzlies and their opponent. The Griz entered the third quarter down 9 and entered the fourth down 7.

For right now, the sub pattern for Joerger seems to be to (roughly) alternate quarters between bench and starters. But the third quarters are a problem, and they're a problem because the Grizzlies' starting lineup (1) isn't the team's best lineup and (2) is clearly gassed by the 5-minute mark and some of them still get left out there another three or four minutes.

I'm going to chalk this up to "annoying rookie coach" trait, but I feel like the third quarter rotation (or lack thereof, since hardly anyone actually, y'know, rotates in and out of the game) has been an issue for a while now. Clearly, the team is mostly winning, so there haven't been Save Lionel Hollins-style fan rallies to get Joerger to do something different with third quarters, but why play a lineup that's clearly not your best for so long? Why?

Not to mention, it's related to the second item:

In the last ten games, Tayshaun Prince has averaged 22.6 minutes. He's had some good games—particularly a 21-point outburst against the Wizards—and he's had some bad ones, going 0-0 from the field in 17 minutes against Brooklyn and 1-8 in thirty-three minutes against Cleveland.

It's far too much burn for a guy who has an 8.5 PER and whose defense—except against certain matchups—hasn't been as good this year to make up for the bad spots. The bigger issue is that this year, the "bad spots" can sometimes run to stretches of three or four games.

I already wrote about this in a previous piece, but I think it's been made even clearer since that piece was written: I don't think a lineup that includes Tayshaun Prince is the Grizzlies' best. The lineup with the most minutes together this season is the starting lineup: Conley/Lee/Prince/Randolph/Gasol. That lineup has a net rating of 5.2, meaning they average 5.2 points more than their opponents per 100 possessions. The lineup numbers are skewed this season because of all of the missed games earlier on—most groups of guys haven't played more than 15 minutes together all year.

But. Conley/Lee/Tony Allen/Randolph/Gasol, the lineup which many have postulated to replace Prince with Allen as a starter? In 24 minutes together so far, that lineup is scoring 120.2 points per 100 possessions, while only allowing 73.4 per 100. If you're following along at home, that's a net rating of 46.8. In the business, that's what we call ridiculous. And—"Tony brings energy off the bench" arguments aside, because those arguments can be countered by bringing James Johnson off the bench as the backup 3 behind Allen—that makes the case that Joerger should at least try starting Allen instead of Prince, just to see how it goes.

Dude needs to have his minutes curtailed. Period. End of story.

And I know it probably won't happen, because Joerger has shown us all season long that he defers to veteran players, even when it's not the right basketball decision. And also because the Grizzlies are winning games with things the way they are. But let me tell you this: things are not going to get better with that lineup. They just aren't. Prince is playing well lately, but we've reached the point where having him on the court takes away so much athleticism and explosiveness that it's hard not to wonder what it would look like with Allen and Johnson—who I've been calling the "Lords of Basketball Chaos" for a reason—out there soaking up those 22.6 minutes a game.

The world may never know.