Note: I'm still mostly out of commission with a newborn, so I've rounded up some guest posts from some of my Griz writer friends to make sure you still have good stuff to read. Today's post is from Kevin Yeung (@KevinHFY on Twitter) of SB Nation's Grizzly Bear Blues. 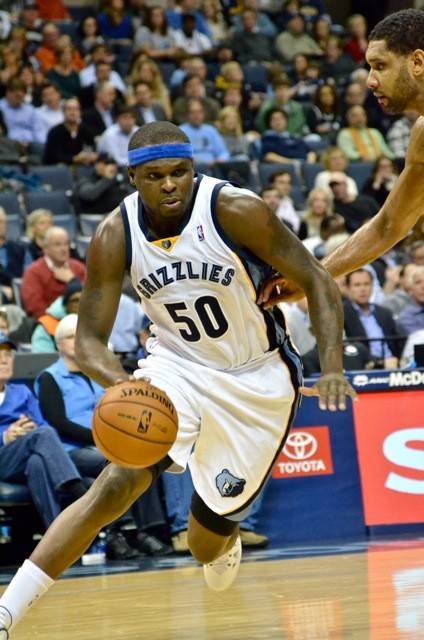 This may or may not be a surprise to you, but the Memphis Grizzlies are a good defensive team. They have the 7th-best defensive rating in the NBA (104.6 points allowed per 100 possessions), and their roster is loaded with outstanding defenders including the likes of Mike Conley, Tony Allen, and reigning Defensive Player of the Year Marc Gasol. I’ve touched on the quality of their defensive scheme in the past, and it’s one that now-head coach Dave Joerger has implemented to great success since he was made the Grizzlies’ defensive coordinator in 2011.

For all of the things they do well defensively, however, the Grizzlies have an obvious weak link. I’m not too fond of the saying “a chain is only as strong as its weakest link”, but it partially applies to starting power forward Zach Randolph. Surrounded by plus-defenders (or average at worst) in the starting lineup, Z-Bo is the player that defenses will draw out and try to exploit. Randolph has a wingspan around 7’4” or 7’5” (it isn’t in the DraftExpress database, but most sources put him around that range), which can act as a bit of a saving grace. The rest of his measurements illustrate why he struggles so much on defense, however. 6’9” is average at best for a player at his position, and the hefty 260-pound frame he has to lug around makes it incredibly difficult for him to keep up with opposing players—forget trying to get up and block shots at the rim.

In recent games, the Grizzlies have played the Miami Heat (April 9th) and the Philadelphia 76ers (April 11th). These two teams started players opposite Randolph that left him in a mismatch where his defensive deficiencies could be spotlighted for all to see. First, Randolph was tasked with defending Shane Battier, traditionally more of a 3-and-D perimeter player playing for a small-ball Heat team, and then he had to guard walking mismatch Thaddeus Young who had an uncommon combination of speed and bulk.

Battier knocked down three first-quarter three-pointers with Randolph assigned to him, and his backup Rashard Lewis (he’s 6’11”, but is more of a three-point specialist than a post player) made four triples in a similar situation. Randolph was dragged out to the perimeter by his check and then exploited by simple plays like pick-and-pops or drive-and-kicks which forced him to make a recovery out to the three-point line that he simply couldn’t. Young scored 18 points on 17 shots in 27 minutes, and it looked he was having the time of his life attacking Randolph from the perimeter. With rare agility for someone of his size and enough ball-handling and shooting skills to operate from the perimeter, Young was too much for Z-Bo to contend with in that matchup.

Depending on the matchup, Randolph can usually score more on his mismatched defender more than they do on him. While Battier dropped three first-quarter threes on Randolph, he was completely overmatched on the other end as Randolph went 8-of-8 from the field for 17 points. Where the situation calls for it, the Grizzlies have the benefit of swapping Randolph’s defensive assignment with a more able defender such as James Johnson, Tayshaun Prince, Kosta Koufos or Marc Gasol. The first two are rare examples of perimeter-oriented forwards that have the capacity to guard bulkier players through their strength and length respectively, while switching the defensive assignment of Randolph and a center tends to work well because Randolph has the bulk and the effort if not the height to muck it up with many centers.

Those solutions don’t work for all situations, however. Not every situation is a mismatch that necessitates a switch or a substitution. The Grizzlies depend on Randolph’s offense too much to switch him out for Johnson or Koufos every time he has a difficult defensive matchup, and a defensive switch can take someone like Marc Gasol away from protecting the rim. No matter what the Grizzlies do (short of taking him off the court), there will always be ways to prey on Randolph anyway.

The easiest way to abuse Randolph is by forcing him out to the perimeter. It was visible above, in the way that mismatched or small-ball 4s could score on him. However, ways to force Randolph from the paint go beyond unusual matchups like Shane Battier or Thaddeus Young. Pit any big man with range to 16-feet or more (of which there are many at the power forward position) against Z-Bo, and things become difficult for him. It can be Chris Bosh, or it can be Draymond Green. By scheme but also by nature, Randolph gravitates toward the rim. It puts him in good position to offer help defense, but more than anything, he likes to rebound. Unfortunately, when the pass goes out to his check, he’s too slow to recover in time to contest the jumper.

It’s one thing to be wary of LeBron James with fewer than ten seconds left on the shot clock, but Randolph leaves Chris Bosh way too much space here and is too slow to get anywhere close to contesting the shot on the recovery.

Of course, the most exploitable way to get Randolph out on the perimeter and then go at him directly is the pick-and-roll. We’ve seen opponents target Randolph with pick-and-rolls over and over again in the past. In last year’s Western Conference Finals, the San Antonio Spurs buried Randolph alive with high pick-and-rolls. The Grizzlies like to drop Randolph back against pick-and-rolls as a way to limit the impact of his lack of agility, and instead give Randolph more of a cushion against oncoming ball-handlers. However, fast ball-handlers with a head of steam can keep going and get by him. The other problem to worry about is the pick-setter. Randolph’s reaction time isn’t great, and he’ll sometimes linger around ball-handlers instead of returning to his check. Couple that with his lack of speed, and teams will try to exploit Randolph in pick-and-rolls by having the pick-setter pop out for a jumper. Considering he struggles to recover in simple spot-up situations, pick-and-pops are one of the easiest ways to abuse Randolph.

Randolph does a nice job of containing Paul George here, poor spacing also being partially responsible (why does Roy Hibbert duck into the middle of the lane there?!), but lingers on George instead of recovering on to David West. West doesn’t shoot it at first, but because Randolph is wary of the pump fake-and-go that he’d also be too slow to contain, he gives West enough space to reconsider and eventually sink the jumper.

Beyond taking him out to the perimeter, opponents have also isolated Randolph from his teammates by posting him up. Randolph does a good job of fighting down low against bruisers, but big men who can put the ball on the floor and make moves to get past him (Kevin Love and LaMarcus Aldridge have dazzled against Randolph) can do so without much difficulty as Randolph has neither the speed nor the hops to keep up and contest shots. Though post-ups are normally an inefficient play, Zach Randolph allows 44.8% shooting on post-ups, the highest of any play type against Randolph tracked by Synergy Sports Technology.

One of the reasons for that might be because isolated post-ups are one of the types of plays that isolates Randolph from his teammates. For all of his deficiencies, having players like Marc Gasol protecting the paint behind him or Tony Allen always lurking in the passing lanes covers up nicely for Randolph. Even with Randolph, the team maintains itself as one of the league’s best defenses. It’s in the final minutes of close games, where offenses are more selective in how and who they attack with the game on the line, that Randolph hurts his team the most. Close games have been lost because of a Randolph mistake on a possession late in the game.

With that said, the Grizzlies’ offense revolves around Randolph and his ability to dominate from the post and on the boards. Randolph centralizes the offense more than opposing offenses target him specifically, which is difficult to do every time down the court. This is a defensive team and Zach Randolph is the weakest link of that defense, but there’s no way to argue that Z-Bo isn’t a net positive.

Where Z-Bo’s struggling defense will be most interesting as a narrative could be this offseason, in the event he opts out of his $16.9 million option for next season for a long-term deal. Then, factors like his cost and age will couple with his poor defense, and compose themselves as a simple question to the Grizzlies: do you re-sign Randolph?

Even this season, Randolph’s lackluster defense has made itself heard down the stretch. There were memorable possessions late in the March 29th loss against the Golden State Warriors where Randolph’s poor defense might’ve swung the game towards the Warriors’ favor. Z-Bo put the team on his back in Phoenix and was a major contributor to the team's clench of a playoff berth. However, just as Randolph will try to push this team into the playoffs through his scoring and rebounding, his defense will probably set this team back.