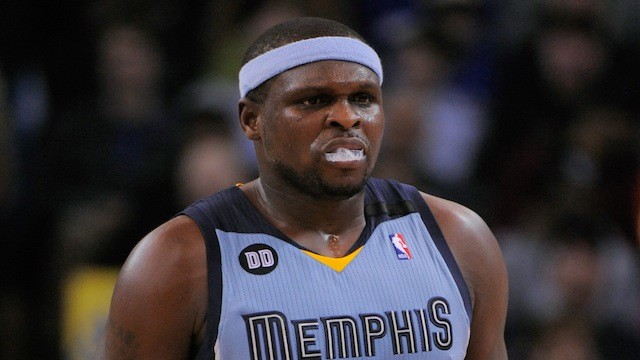 Really? Another overtime game between the Grizzlies and the Thunder? Yes, it happened, for the fourth game in a row, something that's never happened in the NBA playoffs before. And for the third time in the four OT games, the Memphis Grizzlies squeezed out a win, this one giving the Grizzlies a 3-2 series lead, with Game Six to be played in Memphis Thursday.

This one started well for Memphis, with Zach Randolph dropping shot after shot, crisp perimeter and interior passing, and a stifling defense that had the Thunder on their heels. By halftime, Memphis held a 55-43 lead and appeared in control.

That illusion was compounded during the early third quarter when the Grizzlies thoroughly dominated, eventually stretching the lead to 20 points. Then, as has happened in each of the past three games, things tightened up. The Thunder went on an 18-4 run, finding their shots while the Grizzlies went cold. What appeared to be an easy Memphis victory turned into another grit 'n grind™ special.

Both teams had chances to win in regulation. Marc Gasol had the ball in his hand 10 feet from the basket with a second left, but inexplicably chose to pass to Zach Randolph rather than shoot. Randolph caught the ball as the game clock expired.

In overtime, Mike Miller showed up big-time, hitting two quick three-pointers that put the Grizzlies ahead — and amping the pressure to score on the Thunder. The Thunder had one last chance with 2.3 seconds on the clock, down by one. Durant took a long jumpshot that clanged off into the hands of Serge Ibaka, who shoved the ball at the rim. It went in and the Thunder team rolled on the floor in celebration. But replay showed the ball still in Ibaka's hands as time expired. Grizzlies 100, Thunder 99. Whew.

So, break out the defibrillators. Cue the ERs. Memphis and Oklahoma City are playing another game in Memphis Thursday, this one potentially for all the first round marbles. Can these teams make it 5 overtimes in a row? Who would bet against it?