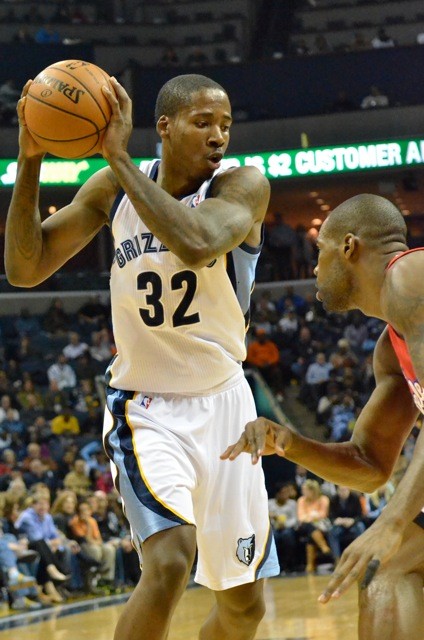 Note: this is the second installation of an ongoing series examining the question marks on the Grizzlies' roster as the team enters the offseason. The first installment is here.

This edition of Roster Rundown will be brief(ish) because there's only one: Ed Davis. (What's a restricted free agent, you ask? Wikipedia has a good explanation.)

The Grizzlies' young forward, acquired from Toronto in the three-team deal that sent Rudy Gay northward, Davis was regarded then as a valuable part of the trade, a young asset who had the potential to be the Grizzlies' Power Forward Of The Future™. Lionel Hollins hated his guts, clearly, or at the very least, didn't think he could play, and so he didn't. Part of the "word on the street" was that that lack of playing time—and an inflexibility about rotation decisions—was part of the big cauldron of tension stew that the front office took under consideration when they decided not to bring Hollins back on a contract extension.

Fast forward to this season, and Davis played in 63 out of 82 regular season games, averaging 15 minutes a game. Most of those came in the middle of the season with Marc Gasol out, but still—not exactly the consistent play you'd like to see from a guy who was starting in Toronto when he was traded. Davis so far appears to be unable to earn time in a crowded frontcourt rotation, and at times, it seemed like Jon Leuer was the clear candidate for fourth big in the rotation.

Davis is hard to pin down. He's incredibly gifted athletically. In the pick and roll with Nick Calathes—with whom Davis undeniably has great chemistry—he had a long stretch during December and January where he was the most efficient P&R roll man in the league, scoring on something like 80% of his attempts at the rim.

The problem with Ed Davis, to my eyes, is that he's a guy who needs 20-25 minutes a night, consistently, to get anything going. This was borne out this season: in November, he didn't play much, and he was terrible in the five to ten minute blocks he played. In December and January, the minutes came much more freely, and his play improved dramatically.

That's a problem for Davis, who is a restricted free agent this summer, and the Grizzlies. The Grizzlies are almost certainly going to extend Davis a qualifying offer, meaning they have the right to match whatever deal another team throws at him. If the Grizzlies are going to commit serious money to Davis going forward, they're going to have to clear space in the rotation for him somehow, and with Zach Randolph on the team (and yes, that Roster Rundown is coming) that's going to be easier said than done. As it currently stands, there's not much more of a role than "fourth big" on the team for Ed Davis, and that role may not actually come with enough minutes for him to be the best that he can be.

It's interesting. Davis didn't play much during the playoffs—and didn't play at all during Game 7 (at least, not until garbage time) even though the Griz were going small-ball and throwing everything at the wall to see what stuck. If you ask people, they say "We really like Ed and think he's a big part of what we're doing going forward," but how true is that? If some other, young team desperate for a starting power forward to grow with throws crazy money at Ed Davis—something like $8 million a year for three years—are the Grizzlies going to match that? Is he that big of a part of "what [they're] doing going forward"?

I guess we'll find out when we see if they put their money where their mouths are if that happens. As it stands, they may be able to get Davis back on an affordable deal, just because his time in Memphis has rendered him such a question mark. I, for one, still think he has that Power Forward Of The Future™ potential, because Marc Gasol does really well alongside a hyper-athletic 4. I think Davis' upsides are bigger than his downsides, and his upsides are only going to get better. He's 24 now, 25 when next season starts. There's plenty of time for him to work on that jumper, right?

Davis' return depends on what happens with Randolph, for sure, because if Z-Bo opts in, there's not going to be room for the Grizzlies to match anything much larger than the qualifying offer—but it also depends on whether (1) the front office and coaches believe in him as much as they say they believe in him and (2) some other team desperate for a big overpays him and the Grizzlies refuse to match. The former seems plausible if not apparent, and the latter seems somewhat unlikely due to all of the consistency issues mentioned already.

There could be a place for Ed Davis on this roster going forward, but that place will have to be made. It's dependent on Zach Randolph, and dependent on what sort of faith the Grizzlies have in Davis' future.