Are the Grizzlies getting better? 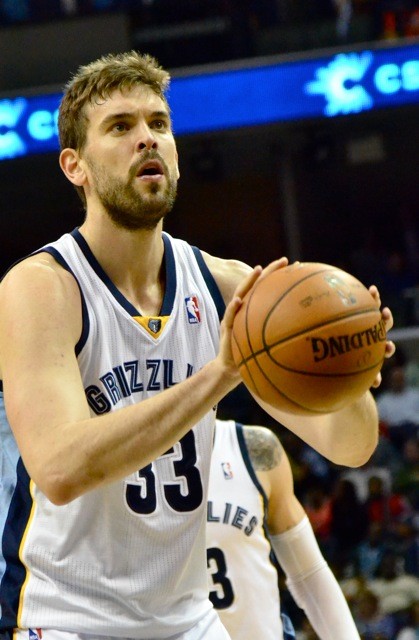 Free agency season is upon us, which means the most fun ("fun") part of the NBA offseason has begun: sitting around waiting for something to come across Twitter from one of the NBA reporting world's usual suspects—Woj, Marc Stein, Marc Spears, among others—about what the league's 30 teams are up to. Today, Jodie Meeks somehow managed to land a contract worth $20 million (I assume this was done during the US World Cup game on purpose, in hopes that no one would notice).

But there's something a little depressing about this summer's free agency period to me, especially in light of the contract extension awarded to Zach Randolph last week immediately following the draft: the Grizzlies, yet again, aren't really in the market for any free agents. Sure, there are holes to fill here and there—a cheap wing who can shoot 3's, a big for the end of the bench so there are five of them in Ed Davis' absence (Davis became an unrestricted free agent Monday), a back up point guard in case Nick Calathes somehow bails and goes back to Panathinaikos (who want to pay him millions of dollars to do so)—but the truth of the matter is that the Grizzlies don't have any cap room left, not enough to make a splash in free agency.

Which is a problem—if not this year, then for the future of this multi-year Grizzlies run.

Shadows of the West

Let's take a look at the other "good" teams in the Western Conference.

So what are the Grizzlies doing to keep up? What are they doing to plug the holes in their roster that were exposed last year—the lack of athleticism, the lack of shooting and scoring at the wing positions, the lack of cohesion on offense and the weird effort/concentration issues that dogged them all year long?

Grinding to a Halt

The Grizzlies, it seems, are basically running the same team back out and hoping that there aren't any midseason injuries that tank their playoff seeding again.

Let me pause here for a second to echo what some commenters said in the wake of the Z-Bo deal last week: it wasn't the best Zach could do to help out the team, it was just the least amount of money the Grizzlies could commit to him and get him to stay. "Helping the team out" would've meant opting out of the 2014-15 season and signing for less for this season, too.

Zach Randolph's personal finances are none of my business, and I 100% respect his right to decide what is best for himself and his family in terms of how he handles his contract dealings. Do not misunderstand me: I have no right to say what's best for Zach or his family. But I do know that if Zach were on the books for $10 million this season instead of $16.5, the Grizzlies would be in better shape, both now, in the offseason, and during the season, freeing up room to take on more salary at the trade deadline. The Randolph deal is a slam dunk if (my philosophy professors would want me to write "iff") one thinks the Grizzlies had to keep him.

Tony Allen is another issue altogether—he missed a large chunk of last season to injury, more games than Marc Gasol, but when he came back (presumably because he'd been working out and conditioning the whole time he nursed his wrist injury) he played better ball than he'd played in a long time. After the way he defended Kevin Durant in the first round of the playoffs, his stock as a defender has probably never been higher. But there's always a "but": Allen is 32, and is under contract for three more years. As dependent as his game is on athleticism, and given Allen's obvious reticence to take on a smaller role, how long is too long to hold on to him? Is there a point at which starting Tony Allen becomes the wrong thing to do—at which playing him 25 minutes a night becomes the wrong thing to do—and when that time comes, (1) will the Grizzlies know it in advance and (2) will he accept a diminished role on a team he (mostly rightly) thinks he built?

The Grizzlies are entering a critical period in their history: the "core four" of Conley, Gasol, Randolph, and Allen are probably at their peak as a group—with Randolph and Allen starting to show very subtle signs of the inevitable decline that comes with age and Conley and Gasol moving into their primes as athletes—and the Grizzlies just don't have much in the way of money or flexibility to bolster them. They've got a stockpile of wings with similar skill sets (except Mike Miller, who may not be back if another team throws money at him) and not much in the way of tradeable assets to immediately improve that situation without setting back another. (Leuer and Koufos are both very valuable—good players on good contracts—but they're much more valuable to the team as players at this point, the entire bench frontcourt—minus Stokes—now that Davis is a free agent.)

What're they going to do? Run it back this year and hope that no one gets injured and they'll thus end up with a better playoff seeding? Try to make some sort of blockbuster deal in season that brings in the athletic wing they're looking for? (I hear you, James Johnson Fan Club, but I'm choosing not to address that here.) See where they end up next spring and spend a whole summer convincing Marc Gasol that they're going to rebuild a contender around he and Conley in short order?

That's the real question: if the Grizzlies can't keep up with the rest of the West as the conference improves around them, why would Gasol stay here, no matter how much he loves it? What Marc Gasol really loves is winning basketball games. If he can see that the Grizzlies will never win a championship while he's here, will he stay?

How much money will Mike Conley command on the open market in a couple of years? Will Z-Bo and Allen go quietly with age, or find a Duncan-like Fountain of Youth? If Gasol leaves, and the Grizzlies are stuck with two more years of Z-Bo and Allen, that's a disaster. If they never make it back to the Western Conference Finals with this group, well, it's not a disaster, but it's not capitalizing on the potential of having a top 5 center and a top tier point guard.

My worry is this: running it back this year might be fun to watch, but I don't think it'll end well—but given the salary constraints, the Grizzlies may already be locked in to that path. Trying to repeat past successes without adapting for the present is an endeavor almost certainly doomed to fail. As my old pal Heraclitus said, you can't step into the same river twice.