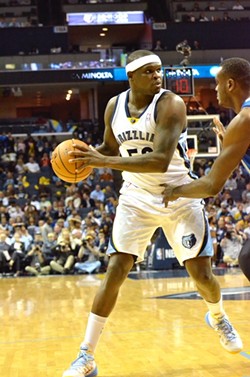 The Grizzlies played a preseason exhibition against Brazilian team Flamengo last night, and… it went about the way you would expect it to. Flamengo hung in pretty well against the Grizzlies’ starters (Conley, Lee, Allen, Randolph, Gasol) only trailing 27–20 after the first quarter, but it all fell apart from there for the visitors, whose names (like “Olivinha” and “Gégé”) Rick Trotter said he had to study three days to

pronounce correctly. By halftime, the Grizzlies were up 62–41, with 36 points in the paint and Marc Gasol and Zach Randolph doing whatever they wanted to against Flamengo under both baskets.

From there, it turned into a second-unit-and-rookies showcase, with Quincy Pondexter putting up 13 points in 16 minutes on 3–5 shooting and 6–8 free throws as he continues to make his case for starting (or maybe just a case for not becoming trade bait). The rookies also got in on the act, with Jordan Adams playing 13 minutes and Jarnell Stokes playing 9.

The Grizzlies ended up winning by 40 points, which makes this game hard to talk about in any meaningful sense, but there were some (small) things that could be taken away from last night’s game.

➭ I don’t know what the odds are that Earl Clark will make the Grizzlies’ final roster—I haven’t heard anything that would indicate that the Griz are planning on keeping him—but I really like the way he plays when he’s on the floor with a lineup that gives him space. Last night, he was on the floor with Jarnell Stokes for several minutes in the fourth quarter, and he pulled open Flamengo’s interior defense enough that Stokes became an unstoppable beast, and his midrange shooting also gave the Brazilians trouble. Clark plays hard, and started games for (admittedly bad) teams recently, and I think his potential as an end of the bench big would provide a great deal of injury insurance and a buffer in case the Grizzlies make some sort of Koufos trade (which I don’t expect them to make, but…).

➭ Jordan Adams did some dumb rookie things last night—a pull up 3 early in the shot clock had coach Dave Joerger particularly unhappy—but I thought he continued to look comfortable on the floor. One hopes that against actual NBA competition playing to win in a game that matters, he’ll continue to look as composed as he has during the preseason. The mistakes are going to happen; that’s just part of it when dealing with rookies. If Joerger can look past that and be comfortable with allowing Adams to develop, I’m pretty convinced the Grizzlies have a potential long-term starter on their hands. Of course, we all said the same things about our dearly departed friend Ovinton J’Anthony Mayo.

➭ At one point last night, Tony Allen almost caused a backcourt violation by doing whatever he was doing without talking to Zach Randolph. Z-Bo was visibly unhappy, walking around cussing, clearly frustrated with Tony. I see that as a good thing: Z-Bo is not a guy known for, shall we say, expending too much energy during the preseason, so if he’s fired up and correcting guys and taking that sort of leadership role even though the Grizzlies are up 20 over a team from Brazil, that says a lot about his mindset. Z-Bo’s role as the only guy who can tell Tony what to do might be underreported, but it’s a vital one, and one imagines that carries over to the rest of the team, too, not just TA.

This didn’t happen during the game, but I had to say something about it. Somehow, I’m going to have to figure out a way to work this one in:

The Grizzlies have three more preseason games before they open the regular season at home against Minnesota on 10/29. They’re all against good teams, so it’ll be interesting to see what approach the Griz take. Rest important players as the season approaches? Try to win them all and tune up the rotations? Throw all of the guys who are likely to get cut on the floor so they can play their way into deals with other teams, the D-League, or Europe?

Monday, they’re at Dallas. Wednesday night, the Cavaliers are in town (which, if I’m not mistaken, is the only time ESPN will be at the FedExForum for a game all season long, which is a gross miscarriage of justice). Friday, the newly LeBron-less Heat are in town for the last preseason game.

Just be thankful the season is about to start, so we can evaluate these games without having to wonder whether the Grizzlies are more worried about winning or working out kinks. Come the 29th, there will be no question.