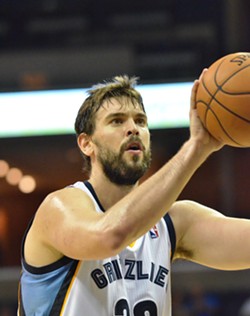 LeBron James may not have been in the building last night, but ESPN was, and the Grizzlies and Cavaliers still played a pretty close-fought game (for preseason, anyway). After previously announcing that the starting wing players would be Courtney Lee and Tony Allen, an injury to Lee forced Dave Joerger to go with Quincy Pondexter as the opening tip in his place—a lineup that some predicted would be the “real” starting lineup anyway. For his trouble, Pondexter spent some of the early minutes of the game guarding Kevin Love, which was a terrible, horrible thing that never needs to happen again.

In what was probably bigger news than the game, earlier in the day Wednesday the Grizzlies announced that they’d waived Earl Clark and Hassan Whiteside, bringing the total number of players on the roster to 16. Of all of the “preseason randoms” that the Grizzlies brought in, I had the highest hopes for Clark, whose game I think could really help the Grizzlies out in spots, but alas, it wasn’t meant to be. It was always going to be a long shot for Clark to make the roster; the Grizzlies under Chris Wallace are historically very reticent to carry a full 15 players into the regular season.

The departures of Whiteside and Clark left only Iowa Energy standouts Kalin Lucas and Patrick Christopher on the roster. I don’t expect either one of them to get signed for the year; instead, I think they’ll both spend this year playing for the Energy while Griz brass keep their eyes on how they’re doing. From what I’ve heard, Christopher in particular has really impressed the folks he needed to impress this preseason. If a need for a wing arises during 10-day season, I’d be willing to bet that Christopher has dibs on it, and same for Lucas and a 10-day stint as a 3rd-string point guard.

But… there was a game played last night, a game that the Grizzlies won even though it looked precariously close to going into that most horrible of things: preseason overtime. The Griz were able to stave that off and win the game in regulation, 96–92, and everyone went home happy.

➭ Marc Gasol has been playing out of his mind the whole preseason, and last night was no exception, even facing off against Kevin Love and a healthy (for now) Anderson Varejao. Gasol continues to assert himself on the defensive boards, grabbing 6 (of a total 9 rebounds) last night in 25 minutes. One has to think that if Gasol can establish his rebounding and make that a factor into the Grizzlies’ transition offense, the Grizzlies are going to be that much more potent this year offensively. On top of the rebounding, Gasol is also playing more like the point guard he’s always wanted to be, making passes like this one on a regular basis:

Gasol appears to be heading into this, a contract year at what might be the peak of his prime, ready to make it the best year of his career. If that continues (knock on wood), the whole league should be on notice. In the GM survey released yesterday, only 25% voted Gasol the best center in the league. He appears to be on a mission to raise that percentage dramatically.

➭ Quincy Pondexter got the start last night, but that doesn’t really matter so much to me. What matters is the way that he played: Pondexter has done a much better job recently of playing within himself, not trying to do too much, and sticking to the things he’s good at. He had several good looks from long range last night that didn’t go in (finishing 2–5) and he ended up taking 9 free throws. He also finished with a block and two steals. I’ve been down on Quincy this preseason (a carryover from how bad he was last season) but if he can keep playing this way, maintaining this composure, he’s going to help this team this year. I still think the team only needs two of Allen, Pondexter, and Lee, but if they were to keep all three, that’d be a wing rotation that I’d be OK with at the end of the day.

➭ Vince Carter played 21 minutes. He still doesn’t look like he can run much, but he made some good passes and showed his potential as an escape valve when a play breaks down, making his own shot and/or attacking the basket whenever he ended up isolated on Mike Miller (who looks weird in a Cavs jersey). I asked Joerger after the game how Carter was fitting in and learning the offense, and he said that he’s not worried about Carter’s shot, his passing, or him learning the offense—that he mostly knows all of that stuff, and the minutes he’s getting in the preseason are “all about scraping off the rust” and getting him into better physical form.

One hopes that Carter’s body will hold up, and that he’s able to get back to where the Grizzlies thought he’d be when they signed him. It doesn’t seem like he’s going to be operating at 100% for a while, though, so it was good to see that even when he’s not at his best he can still make plays (like elevating to block two Dion Waiters attempts at the rim on the same possession) and help the team out.

➭ The Grizzlies’ rookies (Jordan Adams and Jarnell Stokes) didn’t play at all, and after the game, Joerger said the rotations he used were likely to be the ones we saw him deploy in the regular season. This is frustrating, because I (along with most other people who watch basketball and, y’know, have brains) think that Adams and Stokes—but especially, especially Adams on such a wing-starved team—can contribute immediately, if not for huge minutes. Unless they were both getting the night off for rest, which seems unlikely, Adams and Stokes should’ve played the entire fourth quarter last night.

I don’t know what the problem is with the Grizzlies and rookies, but it’s the same old thing: rookies get better and develop by playing in real games. Yes, practice is important, but without game minutes, it’s meaningless. And yet the Griz love to send their rookies back and forth to the D-League (which is even easier now with the Energy relationship in place) and sit them on the end of the bench. Adams and Stokes aren’t just any old super-raw Tony Wroten rookie. They’re both good players and they’ve both had good preseason games. They need to be playing minutes in the freaking preseason. That’s what it’s for.

I will drive to Dave Joerger’s house in Millington and stand outside with a boom box lifted high over my head playing Peter Gabriel until this message gets through.

➭ Speaking of Kosta Koufos, I don’t like it when Koufos and Randolph play together for extended stretches. When Koufos is in the post taking up all of that space under the rim, it pushes Randolph up to the the elbow or out to the short corners instead of giving him room to work under the basket. Because Randolph has become a much-improved passer over the last couple of years, this isn’t as big of a deal as it could be, but the frontcourt spacing issues and the lack of chemistry—which takes time to develop, and at which Gasol and Randolph have a several-year head start—makes the Z-Bo/Koufos pairing not as effective as it could be. I’d much rather see Koufos with Leuer (or even Gasol) than with Randolph, and I’d much rather see Randolph with Leuer or, obviously, Gasol.


Tweets of the Night

The best/most depressing went to the Commercial Appeal’s Chris Herrington:

That was like that awesome Spurs set in the playoffs only instead of a Diaw corner three it resulted in Tayshaun Prince from 18 feet.

And, since I’m in the mood for embarrassment, the dumbest joke I made all night:

If Kosta Koufos does it is it "gyroball"

The Grizzlies finish up their preseason schedule Friday night at home against the new-look Miami Heat, who will either be incredibly watchable this year, or will be an 82-game pile of burning refuse. Could go either way.