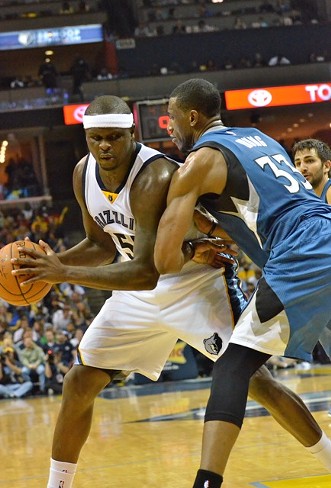 Last night, the improbable happened: the Grizzlies won their season opener for the first time since the franchise moved to Memphis. No one with the team who wasn’t in Vancouver has ever seen them win on the first night of the season. That unlikeliest of streaks was broken last night.

And, of course, it was broken in true Grizzlies fashion: behind a huge night from Marc Gasol (32 points and 9 rebounds) and a dominant performance from Zach Randolph (25 points and 13 rebounds). Gasol shot 70% from the floor, and Randolph shot 75%. No one on the Wolves (with the exception of maybe Gorgui Dieng) could do anything to stop either one of the Grizzlies’ bigs, not even this:

The dominance of Gasol and Randolph overshadowed some negative things (which, of course, I’ll get into below) but overall, a win is a win, and this one set a tone. In the locker room after the game, the players seemed to know they were lucky to close out the game, given how poorly the bench unit played and how badly they were out-rebounded. One got a sense that they were more relieved they didn’t lose than happy that they won, and that’s as it should be—there was a lot to work on. I’m sure the next film session will involve some curse words.

The Timberwolves are in an odd spot this season, too. Without Kevin Love, and having added Thaddeus Young, Andrew Wiggins, and Anthony Bennett, they’ve got a group of very talented young(ish) players and a new coach (Flip Saunders, not Dave Joerger, thought that was apparently this close to becoming a reality) from which they can rebuild into a better team, one that can get over the playoff hump in the ever-competitive West the way a Love-led team never could. They may not be good this year, but they have all the pieces they need. It’s up to them.

Last night was also 1st overall pick Andrew Wiggins’ first real NBA game. Wiggins, who is from Toronto, had to play against Vince Carter, who he’s publicly cited as an inspiration to him growing up. That had to have been weird. Carter made it a point to introduce himself to Wiggins before the game, saying he spoke to Wiggins before Wiggins spoke to him because “I wanted it to be a little awkward for him” before telling Wiggins to call him if he needed any advice (which, I thought, says a lot about Carter). The other thing that was probably a little awkward for Wiggins was going 2–5 from the field for 6 points in 18 minutes, but… he’ll get better. Playing starter minutes in his first-ever real NBA game isn’t exactly the easiest adjustment to make.

➭ Gasol and Z-Bo’s dominant performance. Like I said, the Wolves had no answer for the new-look Marc Gasol and the old-look Zach Randolph. Early on, Randolph was matched up against Thad Young, and neither one of them could guard the other, both guys trading buckets. Gasol, on the other hand, had an easier time with the ever-intimidating Nikola Pekovic, who is generally a good player, but just didn’t have the moves to make anything happen against Gasol on either end. Gorgui Dieng was able to slow down the Grizzlies’ interior scoring while he was in the game, but he hurt his thumb and didn’t play too much after that, and so the onslaught continued.

Gasol playing the way he played opens the game up so much for Randolph. When defenses can’t spend all night packing the paint against Randolph, he’s more effective, and when they do collapse on him—like that picture above of Randolph being quadruple-teamed—there’s always an open shot available somewhere, either from Gasol at the elbow, someone (Mike Conley in this case) at the 3-point line, or somewhere. Having two big men scoring like that makes the Grizzlies a different, much more dangerous team.

➭ Mike Conley looks good. Conley’s stat line wasn’t anything more impressive than normal—16 points, 6 assists, only one rebound—but he looked like Mike Conley, getting into the lane and making things happen, taking open shots, hounding on defense, doing the Mike Conley things that got him so close to being an All Star last season. As Conley goes, so go the Grizzlies, so… this is good.

➭ Vince Carter in crunch time. He may not be able to run yet, and he may have only been out there for a few seconds, but it was long enough for him to get a superstar call when he wasn’t really fouled, something that rarely (if ever) happens to any other Griz player. As Carter heals up (knock on wood) and starts to integrate into the offense better, Crunch Time Carter™ will only become more effective, and that’s a good thing for the Griz. A guy like that—basically a release valve for the offense in case whatever is happening breaks down—is priceless in close game situations.

➭ Rebounding There wasn’t any. Gasol and Randolph did their part, but no one else did much of anything on the glass against the Wolves. The Grizzlies got out-rebounded 47–33, and that makes it seem closer than it was… Minnesota got 19 offensive rebounds (45.2% offensive rebounding rate, meaning they grabbed an estimated 45% of the available offensive rebounds) to the Grizzlies’ 10 (for an ORB% of 26.3, which is… significantly less than 45).

If the Grizzlies’ players who aren’t Gasol and Z-Bo can’t figure out how to rebound better than that, the Griz will lose some games to teams better than Minnesota. It was the first game of the year, so we have no reason to believe they won’t improve, so I’m not particularly worried about it. Yet.

➭ The bench without Calathes. I know Beno Udrih is great on Twitter, and I know he sank some jumpers in the playoffs that really helped the Griz out, but let’s be real for a second: Nick Calathes is a better point guard. Calathes is a better passer, a much better defender, and has a much better feel for running an offense than Udrih, and it shows. Besides that, the bench guys—Koufos, Leuer, et al—are used to playing with him, used to his passes, used to his probing, drive-and-kick style. With Beno Udrih as the backup point while Calathes is serving his suspension, the bench unit couldn’t play as cohesively, and that’s just something that’s going to happen until Calathes returns. 12 more games.

➭ Jon Leuer. Leuer seemed like he was playing well overall last night, but he ended up going 0–4 on some great looks at the basket, only grabbed 3 rebounds, and generally just didn’t contribute very much. Some of that is the aforementioned comfort level with Calathes, some of that was probably first-game jitters, but… Leuer has to contribute if he’s going to hang on to that backup power forward spot. Jarnell Stokes is gunning for him, and Tayshaun Prince is hungry for minutes too, and if Leuer doesn’t work out, there’s definitely going to be someone else who will play in his place. I don’t think it’s a big deal yet—again, Game 1—but it’s worth keeping an eye on Leuer to see if he can really hang in there and contribute.

A road back-to-back Friday and Saturday against the Pacers and HornBobNetCats, and then back home on Monday to face off against Anthony Davis and the (frankly pretty scary) New Orleans Pelicans.