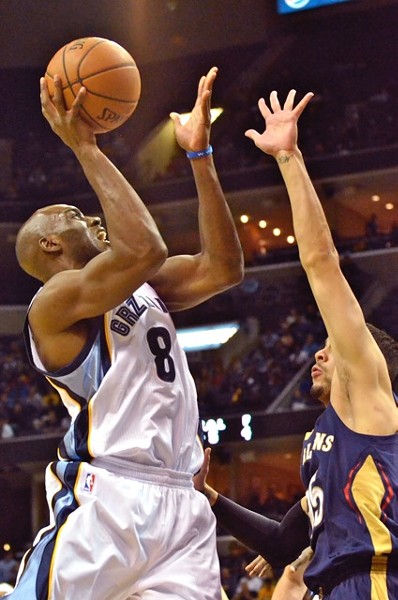 I’m still shocked either team made it out of the 70’s, but the Grizzlies somehow turned a second consecutive game of low-percentage shooting (36% in Charlotte on Saturday, and now 41% last night) into a grind-it-out win against a tough opponent.

The Pelicans, featuring shot blocking, high-scoring prodigy Anthony Davis, had the Grizzlies’ number last year (the Griz only beat them once, even though the Pelicans were never the better team), and they improved greatly this offseason with the addition of former Rockets big Omer Asik, whose defense at the rim was already formidable enough without having to deal with he and Davis at the same time. Throw 3-point shooting power forward Ryan Anderson into the mix, and you’ve got one of the toughest frontcourt combos in the league to deal with.

The Grizzlies, meanwhile, were still missing Courtney Lee to a concussion suffered in Indiana over the weekend, and started Tayshaun Prince in his place, which may have been done for defensive reasons (who else was going to guard Tyreke Evans?) but was not a good omen for the flow of the offense.

Both of those things turned out not to be issues—the Pelicans pose some issues on defense, but offensively, they’re still a train wreck, and Prince went 6–12 for 14 points in 33 minutes—and the Grizzlies were able to overcome their own continuing shooting drought to get the win.

Also, since the Grizzlies won, I’m free to post this and remark on how insane it was to see a real human being actually do this in person:

Anthony Davis is not one of us. Struggles last night or no, he remains one of the most fascinating NBA players to watch, especially live.

The Grizzlies are now 4–0 for the first time in franchise history, and they’ve mostly done it in games where they looked out of sync, struggling to find a rhythm. Assuming those early-season hitches are just that—getting up to speed—this team will be a force to be reckoned with come December and January. If the poor shooting (whether that’s from Mike Conley or from the bench duo of Quincy Pondexter and Jon Leuer) continues, though, they Grizzlies are going to be right back in the same boat they’ve always been on, with no floor spacing and no outside threats. It’s worth keeping an eye on, no matter the team’s record. Either way, it’s time for some notes:

➭ Anthony Davis simply couldn’t defend Zach Randolph last night. In the past, especially last year when Gasol was injured, Davis has been able to single-handedly blow up the Grizzlies’ interior passing game, which is pretty much the key to the whole offense. His shot blocking from off the ball is a big part of what makes him so dangerous. The Griz solved that problem last night by running Zach Randolph directly at him—Davis still isn’t strong enough to handle that sort of physical, footwork- and post-moves-based player, and ended up getting into foul trouble very quickly.

➭ Marc Gasol grabbed a lot of rebounds in the first half but only attempted one field goal. New Orleans was fronting him often, keeping him from getting the ball, and as a result he shifted his game from scoring to doing other things—exactly what Marc Gasol has always done. After the game, coach Dave Joerger said he pulled Gasol aside at halftime and asked him, “Would Larry Bird let himself be fronted like that?” and, as a result, Gasol went 3–9 from the field and 8–12 from the free throw line (!) in the second half for 14 points. Message received. The pressure seems to be on Gasol this year to keep his scoring output up and not sacrifice that aspect of his game to making “the right play” the way he always has. He’s still not as aggressive as he could be, but the “new look” Gasol of this season is a much more dangerous all-around player.

➭ With Jon Leuer continuing his disappearing act, and Courtney Lee injured, Tayshaun Prince played quite a bit last night, sometimes at the small forward spot, and sometimes at power forward with Vince Carter and Marc Gasol. He played well, especially at the 4 (gee, didn’t somebody write about that?), and hit just enough mid-range and long jumpers to keep the New Orleans D honest. If Leuer gets back on track, it’s likely that Prince’s minutes will again diminish, but don’t think for a second that Prince, proud veteran guy that he is, isn’t gunning for Leuer’s job. A Tayshaun Prince who has something to prove and actually plays well enough to prove it could end up being an asset to this team. We shall see.

➭ At some point, somebody has to start hitting some outside shots. Mike Conley was 2–10. Quincy Pondexter was 2–6, and his lone 3-point make came late in the game. (Both teams only made 4 3-pointers last night, which should tell you something about what it was like to watch this game.) Jon Leuer played 6 minutes, took 3 shots, didn’t make any of them, and was so clearly playing rattled that Joerger pulled the plug on him in the second half and played Tayshaun Prince in that spot (with additional small forward minutes from Vince Carter) instead. The Grizzlies, who supposedly improved at the perimeter with the addition of Carter, the return of Pondexter, and the drafting of Adams (who played 45 seconds—more on that later), have not actually improved. In fact, with Lee injured and Prince and Allen playing a lot of minutes at the wing spots, they’re right back where they were: with four guys from the other team standing in the paint daring Gasol and Randolph to do something. That they can still, in fact, do something is a testament to how well they’re playing.

➭ Pondexter and Leuer either need to get on track and start making shots—Pondexter made a 3 towards the end of the game, so hopefully that will get his confidence going—or they need to sit on the bench. Having them out there playing the way they’re playing isn’t doing anyone any good, and if the Griz need to explore their options at those positions, they should start doing that sooner rather than later. Pondexter plays better with the starting unit than he does with the bench, so maybe there’s just a chemistry thing there that will work itself out, but Leuer hasn’t played well with anybody all year yet. He’s got to get on track, or else this team has a gaping hole at backup 4, and even if that hole were shaped exactly like Jarnell Stokes—and it might be—I’m not confident that Joerger believes in Stokes enough to give him that shot.

➭ Speaking of giving rookies a shot, Jordan Adams entered the game for the final possession of the third quarter. It was his first time playing in a real NBA game. He was subbed in for defense, and ended up giving up a layup to end the quarter—and so, of course, he didn’t play again, and it’ll probably be weeks before he sees the court again. This is the problem with that: if you only play rookies in very limited minutes, of course they’re going to screw up. They’re (1) new to playing NBA basketball and (2) terrified that if they screw up, they’re not going to play for two weeks. This is exactly how Lionel Hollins ruined and/or failed to develop player after player with his too-short leash. It’s not even rocket science. If you want Jordan Adams, who is clearly very talented, to become a good NBA player, you have to play him. I feel like I’ve been saying this about every Grizzlies rookie for the last five years, and that’s maddening, because I’m right. Everyone knows I’m right. 45 seconds of basketball is not going to help Jordan Adams become better—it’s only going to make him play scared. Developing players is about letting them play through mistakes. No one else was doing anything well on the perimeter last night, so it would’ve been the perfect spot to give Adams five minutes just to see what happened. Instead, he got one possession, on defense, and then got to sit back down. Sometimes I don’t even know why the Grizzlies bother drafting players.

Could’ve been this one from Chris Herrington:

But the winner is this one from Peter Edmiston: