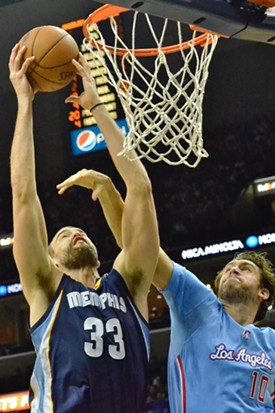 Today, in advance of the Grizzlies’ home matchup against the arch-nemesis San Antonio Spurs, I thought it’d be good to collect some links to some of the great Grizzlies-related pieces that have come out across the web over the last couple of days.

First off: Some of you may remember that before taking over at the Flyer I was the managing editor of SB Nation’s Grizzlies blog, Grizzly Bear Blues. SBN’s (great) Spurs site is Pounding the Rock, and in advance of tonight’s Griz/Spurs game I did an interview/chat with that site’s editor J.R. Wilco as part of their “Fraternizing with the Enemy” series. We talked about what’s new with the Grizzlies this year, whether Marc Gasol will be a Spur, and when Tim Duncan and Manu Ginobili will retire.

Speaking of Gasols, Zach Harper from CBSSports.com has a piece with a pretty self-explanatory title: Marc Gasol is the best big man in basketball, which features some great quotes from Gasol and a good look at how the Grizzlies’ offense has gotten better since Dave Joerger took over as head coach (and as Gasol has become more willing to score).