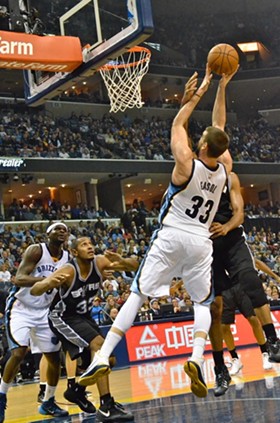 Last night, the Grizzlies lost a close game to the San Antonio Spurs. What happened was pretty straightforward, really: the Spurs were missing Tiago Splitter to an injury, and so Matt Bonner started in his place. Feeling they had a mismatch with Zach Randolph on Matt Bonner, the Grizzlies slowed the game down, forced the ball inside to Randolph whether he had good position or not, and let him go to work.

That’s the thing about the Spurs that has been true since the second the 8th-seeded Grizzlies upset the 1st-seeded Spurs in 2011, though: Zach Randolph can’t go to work. Whether it’s through one-on-one matchups or the way the Spurs’ defense contorts to double Randolph from the baseline, he has never found an inch of breathing room against the Spurs since that series, like Spurs coach Gregg Popvich spent the entire summer of 2011 watching film of Z-Bo’s single-handed decimation of his entire team—maybe the pinnacle of Randolph’s career so far in terms of solo beast mode performance—and decided “Zach Randolph will never beat the Spurs again.”

So, when the Grizzlies started forcing the ball to him early on Friday night, it went nowhere. By the 7:30 mark of the first quarter, they were down 13–2—they’d only scored one basket in four and a half minutes of basketball. The first quarter ended 25–14, and it was pretty much all over from there. The Grizzlies scored 32 in the 2nd to the Spurs’ 33, and then outscored the Spurs in both of the last two quarters, but the Spurs’ lead was just enough for them to stay in front the rest of the way. At the end of the game, Mike Conley had an open three from the top of the key to make it a 3-point game with 27 seconds left, but it missed (probably because Conley had played 38 minutes at that point) and the Spurs were able to hold on.

All in all, it was a really tough matchup against what I think we can safely say is the real best team in the West right now, since the Spurs also beat the Golden State Warriors in November.

The Grizzlies play the Spurs two more times in December. Before Friday night’s game, Dave Joerger said that tonight was about finding a “chink in the armor” of the Spurs; that even if the Griz didn’t win, if they found some things they could take away and use against the Spurs in the next two meetings between them, it would be a success. I think some of that happened last night, but it was clear most of the night that the slow start was the problem. There was a lot to take away from this one:

➭ Marc Gasol’s bone bruise to his knee, suffered towards the end of the game in Houston on Wednesday night, was apparently not too much of a problem. That, or Gasol is some sort of superman who doesn’t feel pain. In 40 minutes of play (which is probably too many), Gasol had 28 and 12 on 9–20 shooting. So much for that injury, huh? Gasol was pretty great most of the night. Watching him face off against Tim Duncan is a real joy to watch, and Grizzlies fans who love the game should cherish these matchups this season while Duncan is still around.

➭ Tayshaun Prince was en fuego against the Spurs, slotted into the lineup for Tony Allen pretty early on when Courtney Lee struggled to guard Kawhi Leonard’s length and size. Price played defense well, handled the ball when he had to, and most importantly scored 20 points on 11 shots. (Took a lot of strength not to put eleven exclamation points after that.) Prince camped out in the corners and made 4 of his 4 attempts from three—something he doens’t always do, but something the Grizzlies have always known he could do—and also had a couple of dunks when he had a clear path to the rim.

It was a great game from Prince, and a reminder that (1) he may not be the player he once was, but if Vince Carter or Jon Leuer can’t get the job done (or, in Leuer’s case, Joerger doesn’t think he can get the job done and thus doesn’t play him), he will take those minutes and (2) as the power forward in a small lineup with two ballhandlers (Conley and Udrih last night, but theoretically this could also be Conley and Calathes, though Udrih’s shooting is more valuable than Calathes’ passing against the Spurs), Prince is still an effective player, with room to utilize his post game, length to guard smaller 4’s, and apparently he can shoot 3’s instead of stepping in and taking a long 2.

He also did this:

With ESPN reporting that the Cavaliers are interested in trading for Prince, it’s fair to wonder whether last night was a “trade showcase” game for him—but if he’s going to be this valuable of an asset against the Spurs, having flashbacks to the 2005 NBA Finals,

➭ Vince Carter was, frankly, terrible. I wondered earlier this week how much of Carter’s poor play was due to injury and how much was due to Carter not being the player he was in Dallas. Last night didn’t make me feel any better about those concerns. Carter was 0–5 in 15 minutes, and it felt worse than that. In a game in which Quincy Pondexter got a DNP-CD, Carter out there contributing nothing but maybe a little bit of floor spacing was not what the Grizzlies needed. The only explanation for playing Carter over Pondexter last night when it was clear that Carter didn’t have it was that Joerger still doesn’t trust Pondexter to be 2013 Conference Finals Quincy and camp out in the corners and shoot rather than being 2013–14 Regular Season Quincy and trying to dribble. I was a litlte worried about Carter before this week, and he’s done nothing but reinforce those fears with his play this week.

➭ The main takeaway for the Grizzlies from last night? The small lineups are much more effective than trying to play inside-out against the Spurs. Forcing it to Zach Randolph has not been an option for three years now. Multiple ball handlers, not playing anybody who can’t shoot (sorry Tony Allen), hitting guys on the move instead of isolating on the blocks: that’s the only way to beat them. There is no margin for error against San Antonio, as ever. If the Grizzlies can beat them the next two times they play this month, last night’s loss was worth it.

Lots to choose from last night, so here are three:

Two years ago, Griz learned they couldn't play Allen, Prince & 2 Bigs vs. Spurs. Now I wonder if they can even play Allen + 2 Bigs.

Now people throw it to Gasol like he's a point guard. Gasol on the break is pure joy.

@FlyerGrizBlog /Pop puts hand on shoulder /Bane voice "Do you feel within reach?"