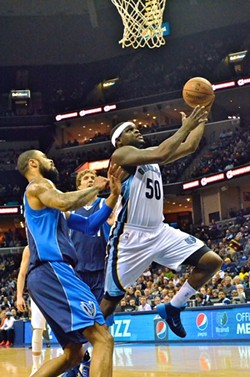 Last night at FedExForum the Grizzlies pulled off a come-from-behind win over the Dallas Mavericks, a Southwest division rival with the highest-rated offense in the entire league, averaging a blistering 116.1 points per 100 possessions. That offensive firepower was on display last night, and the game featured a lot of scoring from both teams, but eventually the Grizzlies’ defense clamped down when it needed to and the Griz were able to use their newfound offensive prowess (the Griz offensive rating is currently the 5th best in the league according to Basketball Reference) to score enough to keep up and then come out on top.

The first quarter was the indicator that the game was going to be a weird one: the Mavs ran out to a big lead early, hitting threes and getting to 10 points ahead of the Grizzlies before the Griz offense started to catch up. By the end of the first quarter, it was 37–34 Dallas. The second quarter was just a matter of the Grizzlies keeping up. Defensively, the gameplan was obviously to go under screens on Dallas’ shooters, which was leaving them wide open behind picks on a regular basis. It wasn’t working, but even though Dallas shot a ridiculous 10 of 17 from three in the first half, the Grizzlies only trailed by six.

The third quarter was what really won the game: the Griz defense started going over screens, clamping down on Dirk Nowitzki (Dirk was 4–17 on the night for 11 points, and didn’t make a single three), and generally tightening up, and the Griz won the quarter 36 to 17. Zach Randolph had 13 in the 3rd quarter alone, and Mike Conley had 11. From there, it was a matter of fending off the inevitable Dallas comeback attempt; Dallas can score well enough that everyone knew it was coming. It did, but the Griz were able to remain on top and hold on to win it 114–105.

➭ Marc Gasol continued his insane start to the year by rebounding from a bad game against Miami on Sunday night to score 30 points. His defense was on point last night too, which is something that hasn’t always been the case with New Superhuman Marc Gasol. When Marc Gasol plays like this—and scores like this—the Grizzlies are a very, very dangerous team. When Gasol scores like this and Conley scores more than 20, you know the offense is cooking, and they can beat anybody in the league. Towards the end of the game last night, the FedExForum crowd started up an “MVP” chant for Gasol, and it didn’t feel undeserved at all; that’s really the level he’s been playing at almost every game this year. It’s a beautiful thing to watch.

➭ The other beautiful thing to watch was the Grizzlies’ defense of Dirk Nowitzki. The thing with Dirk is that it doesn’t matter how tough of a shot you force him into; they usually fall—so in the postgame Dave Joerger said that everything the Grizzlies were doing was about trying to play him man-to-man instead of sending help and leaving someone else open. The Grizzlies who defended Dirk last night—Tayshaun Prince did it some, Jon Leuer (alias “Tennessee Dirk”) did it some, and Zach Randolph did his annual “play good defense against Dirk randomly” trick—did an excellent job of staying between him and the basket and making him pull up for shots that aren’t as sure for him. The rest of the Mavs had to try to shoot themselves out of the deficit they built up in the third, because they couldn’t count on Dirk to take the game over and bring them back, and Dirk couldn’t do it, which is a feat the Grizzlies who defended him should be proud of.

➭ Speaking of Tayshaun Prince, Tayshaun Prince! In almost 30 minutes, Prince had 12 points on 9 shots, hit some corner threes, and played excellent defense, lending a great deal of credence to the fact that maybe he was just unhealthy last year. Obviously Prince isn’t a guy you want to play for 30 minutes every night, but playing against teams with longer/bigger small forwards or stretchy power forwards, Prince is starting to look like a great weapon to be able to roll out.

Oh, and he did this to Brandan Wright:

Not bad for a guy we were all making Skeletor jokes about just a few short weeks ago. Prince has definitely asserted himself recently, and has earned his keep as a valuable reserve player for certain matchups. Which probably isn’t what he wants to be at this point in his career, but it’s working for him. He’s also started to edge Quincy Pondexter out of the rotation, though if Vince Carter doesn’t start to play better soon, maybe that will change, as well. I really don’t have it in me to talk about Vince Carter any more right now, though.

➭ Kosta Koufos only played 6 minutes last night. The trade rumor mill started up with rumors that the Cavaliers were interested in Tayshaun Prince and Kosta Koufos, and the fact that Koufos’ minutes are down from where they were last year lends some credence to the thought that maybe the Grizzlies could live without him. I’d still be nervous about trading Koufos away without having someone who is a true center on the roster to back up Marc Gasol, but the way the Grizzlies use Zach Randolph and Jon Leuer as a 5 in certain lineups, maybe it’s not really necessary. Given that Koufos is a free agent after this season who will almost definitely be highly sought-after, I think it’s safe to assume that the Grizzlies will not be able to afford to re-sign Marc Gasol and re-sign Koufos, and that’s not a decision anyone should spend more than .3 seconds (and not in Courtney Lee .3 second time, either) deliberating.

It's amazing how I actually feel like it's going in whenever Tayshaun launches from the corner now. Recency bias at its finest.

The Grizzlies have a couple of days off before facing the Charlotte Hornets (see? I didn’t even make a “HornBobNetCats” joke) Friday at home on the first game of a back-to-back that sees them in Philadelphia taking on the 76ers (who are currently on pace for 76 losses) on Saturday night.